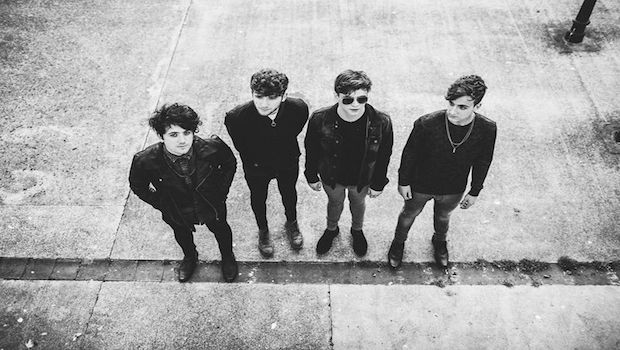 Spending just a short time at Longitude, young Indie rockers, The Academic had a jam packed weekend, flying off to play at Benicassim straight after their set.

We caught up briefly with the boys almost instantly after they stepped off stage in the Whelan’s 25 tent.

You’ve just finished your set at Longitude – how do you guys feel it went?

Really good! We’re really happy. The crowd turned out to be bigger than we were expecting, especially for the first slot of the day. We got an encore!

You’re literally flying to Benicassim pretty much straight after this?

In an hour yeah! We can’t wait, it’s the first time our music has taken us out of the country so, pretty excited for that.

You supported Kodaline recently as well, talk to us a bit about that…

We did yeah, in Whelan’s. We had a stint of supporting The Pixies and then Kodaline the very next day. Like, if you look back six months ago and someone said we’d have done all this, we would’ve been like “wow!”, but it’s been a slow build, feels like really good progress and we’re going somewhere. We’re really grounded and have a good team behind us and everything’s kind of looking good for us.

You released your single ‘Bear Claws’ last year, how have you found the reaction to that?

It’s been amazing, we’ve got a really good response. It’s given us a platform to do big gigs. [Yeah, it even got a great reaction today. Have you plans to follow up on it?] We do, we recorded an EP two weeks ago and we’re gonna release it in September with a single. The single will be coming soon. [And then promoting it live I presume?] Yeah, a lot of gigs around, a couple of London shows and stuff as well.

How have you found the fanbase over there?

We’re not too sure yet, it will be exciting to see though!

You mentioned an EP there – talk to us a bit about the writing process that led to that?

It’s basically songs we’ve performed live a lot for the last year. We had a lot of songs to choose from really and it was hard to narrow them down to just four. ‘Bear Claws’ is the only thing we’ve ever released so we’re tried to match that and show people the slower side of things and then the more upbeat, energetic side as well. Producer Mike Spink as well was great, he came in and showed us what the songs could be in the studio, and just captured the energy as well. It’s being mixed by Mike Crossey who’s worked with The 1975 recently, Arctic Monkeys, Jake Bugg, so he’s got a lot of credentials. We’re really looking forward to seeing what he does with the tracks.

Over the rest of the Summer, what other festivals or plans have you guys got?

Well we’ve Benicassim tomorrow night, we’re doing Indiependence in Cork in August, we’ve a few more announcements which we can’t say right now. Yeah, we’ve lots of shows, especially when it hits September we’re putting the pedal down and doing a lot of gigs, and our EP is coming out then as well. All busy from then.

Thank you so much for that interview guys, best of luck at Benicassim tomorrow.

No problem, pleasure. Thanks a million!

Check out ‘Bear Claws’ below:

The Academic – Bear Claws on MUZU.TV.