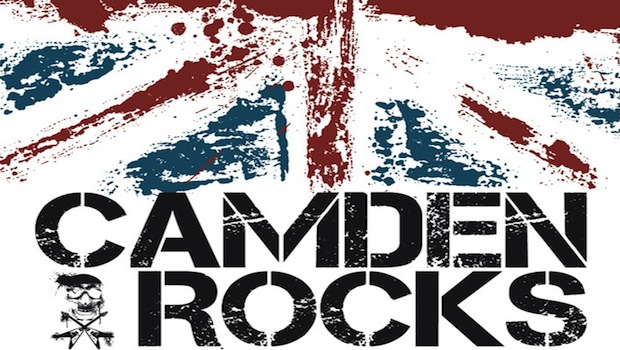 With 20 venues and over 150 bands Camden Rocks is the capitals place to be for new music.

The idea of new music festival has its obvious attractions, but it also provokes its worries too. Mainly would the calibre of bands be the same as a more well-known festival, or would we be wading through the dross of hype band after hype band to find a diamond in the rough.

Happily Camden Rocks shoved those worries aside and made for a great music drenched day.

Easing into the festival initially, we headed for Forge, one of the acoustic venues. A modern, clean cut cocktail bar with a small stage at one end is what awaited us.

Longy, a whiskey soaked blues band with a Camden style edge were our first act of the day. The pain in their singers voice filled the room, soon to be joined by a trumpet playing punk. Starting off at the back of the room, he swaggered through the crowd to join Longy on stage. Lyrics like “My boss thinks he’s Hitler, I just wanna get paid” epitomise the band.

Up next was an acoustic set by Joe James and Jono Yates of Blitz Kids. Pulling a large crowd of hardcore fans, who mainly sat on the floor making for a relaxed, stripped back vibe. The boys started out with ‘Sometimes’, Joe looking slightly confused by the acoustic set up, resorting to singing with  his eyes shut. “This is weird, there’s so much space. I’ve got nothing to jump off.” There set was super chilled all the way up until the venue staff forced fans to get on their feet and pushed them forward to squeeze more punters in at the back, destroying the vibe. A shame.

To the Underworld we rushed next, managing to catch all of Boy Jumps Ship’s set (who we later grabbed an interview with). They were our first full band of the day and didn’t we know it, super loud distorted guitars, pounding drums and feedback filled the Underworld, drawing in more and more people every minute. Boy Jumps Ship went in all guns blazing, trashing around the stage at every given opportunity. The band deal in alternative rock, jammed full of big choruses and band chants the likes of “We are invincible!” and “we’ll sleep, we’ll sleep when were dead!” just begging to be bellowed back by the every growing BJS army. The guys clearly love what they do, still being sown to earth as they do it. I still adore the 2 foot jump Si did during ‘Fugitives’.

We caught most of Turbowolf’s show at the Electric Ballroom. The place was full to bursting, every single person going nuts for Chris Georgiadis and his band. I have to admit that I’m not a fan of Turbowolf but Georgiadis is one hell of a frontman, he had the entire crowd in the palm of his hand from the word go. Fake flowers were in held in between teeth, multiple goes at crowd surfing, old fashioned phones handed to front row claiming “answer it, it’s your mum… go on, answer it”, even getting a girl up on stage to play synth whilst Georgiadis went crowd surfing again. A brilliant show to watch!

Dinosaur Pile-Up were top notch too, choosing to open their set with the apt ‘My Rock ‘n’ Roll’. The only issue I had, being a huge DPU fan, Matt’s single guitar made of a thinner sound than I would have liked. ‘Traynor’ was a crowd favourite for sure, taking them from bouncing happy all the way to bat sh*t crazy within three minutes and Matt does love rile around on the floor he does.

The night’s headline act we’re The Subways pulling an even bigger crowd then Turbowolf, don’t know how they could have fitted that many people into one room. The band came on stage to ‘Pure Imagination’ quickly launching into ‘Oh Yeah’  only to let the crowd shout back the whole first chorus acapella.  “Bounce Everybody!” is the command leading into ‘Shake Shake’ and the throng happily oblige, Charlotte Cooper is the tigger of the three piece, show practically doesn’t stop bouncing around stage all night. The first new track of the show receives mixed reactions, ‘My Heart Is Pumping To A Brand New Beat” see’s the more fickle fans head to bar but the diehard fans are still with The Subways 100%.

A wallet gets thrown on stage and being very such a nice group, it’s announced to the crowd and then handed into lost property. ‘Kiss Kiss Bang Bang’ gets the crowd riled up again coursing a small pit to open up centre stage, and the band don’t let up, jumping quickly in ‘My Rock ‘n’ Roll Queen’ and the intro being screamed at the top of their voice by every person in the Electric Ballroom. Keeping the fans a bouncing, sweaty mess is ‘We Don’t Need Money To Have A Good Time’ as a crowd surfer goes head over heels pass the barrier.

“The encore is some out of date bullsh*t, so let’s pretend that we went off stage and came back on right?” announces Billy Lunn, they roar back with their answer. The Subways end of ‘It’s a Party’ and “I know I’m a bit old and a bit fatter, but I still expect you to catch me”, cue stage dive from Lunn.

Awesome party, you know it don’t get much sweeter, Camden Rocks!