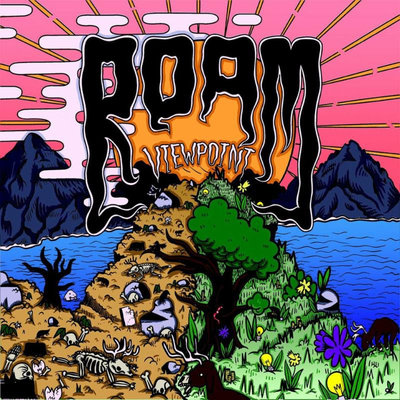 Relatively new comers Roam release their latest EP ‘Viewpoint’ January 26th, we’ve had a sneaky little peak. So if you’re a new comer to Roam, they are a five piece self-confessed pop punk band from Eastbourne. The guys have been around since late 2012 but in that short time their hard work has paid off with UK tours, a support slot on Enter Shikari’s Eastern European tour, headline hometown shows and much more.

Their tour diary is proof that Roam are truly brilliant friends first and a band second. This makes for heat breaking viewing when Alex Costello (leads vocals) passport gets lost which means he can’t make the first week of tour. The guys a really cut up about it and it clearly shows.

First track of the ‘Viewpoint’ EP is ‘Over Your Head’, its classic pop punk with fast pace drums, distorted guitars and thick, rolling bass. The duelling vocal of Costello and Alex Adam (guitar) helps to push the tracks head above clique waters, themes of feeling like an outcast run strong especially with lines like “Am I the only one who feels like their burning bridges…” and “under pressure I try to be, the person that people see…”. The heavier outro shows Roam’s abilities to produce more initiative licks and tricks.

My favourite track of the ‘Viewpoint’ EP is lead single ‘Waning Sign’, a three and a half minute barrage of licks, shouted vocals and perfectly placed drop outs. The video is pretty cool too, it takes footage from the bands time in Greece, post tour, as well as giving fans a feel for their live show. Which, by the way, looks great fun as Costello has a love for screaming lyrics into people’s faces.

‘Warning Sign’ feels like a band asking questions about life, when will they finally feel like a proper adult, if or when will things change, “I’m tired of sleeping on the floor… I just wanna know where it ends’

If you want to be super critical, Roam’s ‘Viewpoint’ EP is clique pop punk that isn’t adventurous at all but on the other hand it’s still good fun and speaks clearly to the bands key fans.