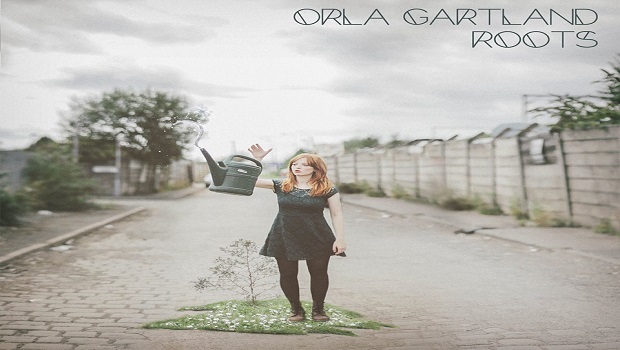 Today marks the release of the debut EP from 18-year-old singer/songwriter Orla Gartland. Within its first day ‘Roots’ has already hit the No.1 spot in the UK and Ireland singer/songwriter charts and No.3 in Ireland’s main chart.

It has been a busy year for the Dublin songstress- not only did she have her own headline tour of the UK and Ireland through July, but she also supported both Frank Hamilton and Lauren Aquilina on their tours.

‘Roots’ EP is made up of four tracks, with a style of music best described as a quirky folk blend of pop. Track one goes by the name of ‘Roots’ and offers an up-lifting sound, combining a steady beat, with some light acoustic guitar, a dash of piano and a catchy chorus that you will find yourself singing along to. The backing vocals and harmonies sound superb, giving the song that little something extra.

Track two is called ‘Clueless’  and has a real pop sound to it. We hear some electric guitar this time, still accompanied by some piano, and some more apparent drums. Yet another catchy chorus, “OH NO – you got me, OH NO – you got me again…” it would be rude not t sing along. This song reminds me of the sort of music you’d hear from Taylor Swift, but better. There is also a clever little lyric that I’m particularly fond of, “I was tangled in your web, but I thought you couldn’t hurt a fly.”

‘Human’ is track three on the EP. It starts out gently, just an acoustic guitar and vocals, up until the chorus where the backing beat kicks in, followed by some bass and a little electric guitar for good measure. The rhythm of this song really gets you moving, I found myself sort of half dancing to it in my office chair. The chorus offers some more of the beautifully constructed harmonies we have already heard in the first two tracks.

The final song on the EP is ‘Empty Man’, the slowest and most stripped back of them. There are just two main elements to the song, a guitar and Orla’s voice, but it doesn’t need anything else. With the odd harmony and a couple of sound effects in the back ground, this song is truly stunning. It has a slightly sombre feel to it, telling the story of a lover who has been and gone with lyrics such as “I’m dying to be back in your love, but you’re just an empty man”. The emotion really shines through the production, giving the song some real meaning.

Orla Gartland is definitely one to watch, and I think we will be seeing much more of her. Well, I hope so anyway.

Orla will be touring again in February 2014 in support of the ‘Roots’ EP.

Catch her at the following dates: