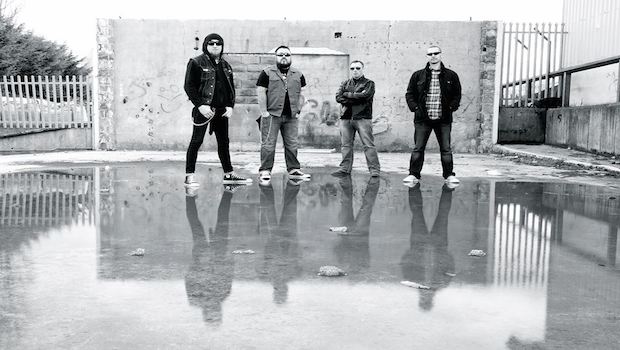 Hailing from Cork, Mind Riot have released their début EP after 22 years of perfecting their craft.

Mind Riot are a four-piece hard-rock band formed in 1992 and have somehow managed to slip under everybody’s radar until this year. Playing a nearly-packed out Beer Hall Stage at Indiependence 2014, the Cork lads débuted their new single ‘Fire’, and unveiled their first EP.

The EP opens with ‘Low’. From the get-go, we can hear one of the band’s main influences shining through in the form of Pearl Jam. Tony Gorry’s vocals effortlessly reflect that of Eddie Vedder’s, while retaining his own unique sound. ‘Low’ was a superb sound to introduce the EP, each band member showcasing their respective skills to the core.

‘Brother’ echoes a Foo Fighters song, complete with Dave Grohl-esque vocal prowess. Another incredibly strong track to feature on their first EP, Mind Riot shows us a fairly more aggressive side of themselves. The guitar solo on this track is well worth a listen, especially for fans of Tom Morello’s work.

Next up is a track we condemn as the standout track on the EP. ‘Boys Of The Tomahawk’ paints the band as people who should be blaring this track to thousands of people in a packed arena. This is truly an anthem waiting to catch on. The eerie guitar work and awesome bass grooves are complimented by superb drum fills played by the band’s own Steven Bartak. ‘Boys Of The Tomahawk’ is the kind of song every band should want to have as a staple to their live setlists.

Mind Riot’s debut single, ‘Fire’, features next. Liam O’Rourke introduces the song with a slick bass line that is quickly met with groovy guitar work from Michael Hoye. Another strong number, the track holds a very catchy pre-chorus which leaves no doubt as to why it was chosen as the EP’s lead single. For those who witnessed the song played at Indiependence this year, you will know that the band are capable of holding their own in a live setting, maybe even topping their studio efforts!

The guitar riff present in ‘Vain’ is similar to something Zakk Wylde would play, though unfortunately not quite as memorable. In fact, ‘Vain’ is the weakest point of the EP. Other than one or two cool vocal moments where we hear Tony show off his aggressuve singing ability, there isn’t an awful lot in this track that will keep the casual listener coming back for a second listen.

To close the EP, ‘Summer Breeze’ brings us full circle. The Pearl Jam vibes return here, not just in Tony’s voice but in the instrumental wave too. This is a decent finish to a great EP, and leaves the listener wanting to hear what else the band have hidden up their sleeve.

It’s clear who the band’s main influences are, and while they pull off the sound very well, it wouldn’t hurt them to concentrate on creating a wholly unique and signature sound. Despite this, Mind Riot’s debut EP is one of the strongest to pop up in a long time.

You can catch Mind Riot in the Black Dog Saloon & Mezcalaria in Cork, Ireland, on August 23rd. Following this, the band will disappear in September as they are planning to write some new material – hopefully to record in October. They are also planning to release their music video for ‘Fire’ this week.