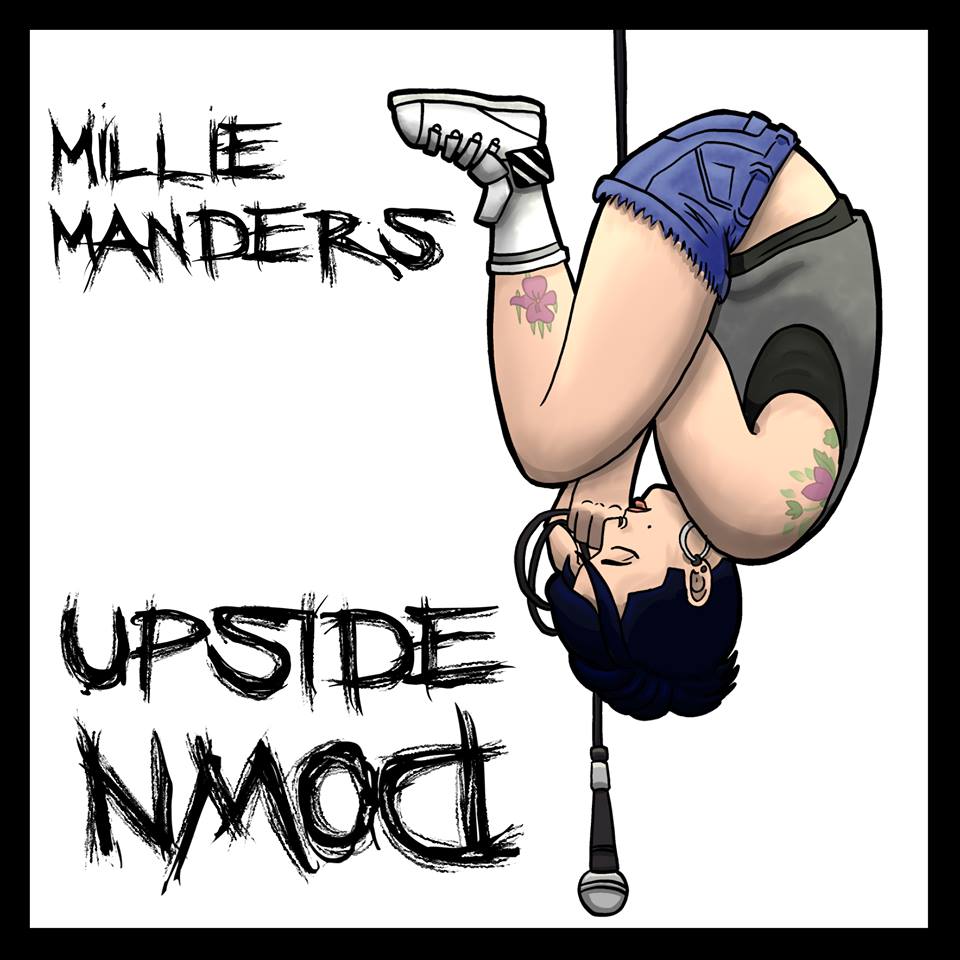 For anyone who’s been following Millie Manders’ career over the last few years, her tendency to mix things up is no big shock. From the eclectic punk of Millie Manders & The Shutup’s 2015 ‘Obsession Transgression’ EP to her involvement in the Specialized and 24 Hour Punks charity projects, it’s clear she’s not one to stay too comfortable for too long. However, with her latest EP ‘Upside Down’, Millie manages to prove she’s still very capable of throwing a musical curveball, and in a stunningly poignant way.

The first thing we notice about the EP is that when Millie Manders goes solo, she doesn’t do things by halves. Apart from the occasional moment, ‘Upside Down’ finds Millie accompanied by just her voice and ukulele, which makes the variety on display here even more extraordinary. These stark arrangements allow for the lyrics and sheer emotion to really shine through, and it’s these factors that are the main selling point of the EP. Proceedings kick off with the title track, probably the most familiar Manders territory displayed throughout the next 15 minutes. While the song discusses the all-too-serious matter of fighting your own personal demons, the general feel is more poppy, upbeat and feisty, particularly during the chorus. This leaves us totally unprepared for the ending, as the song cuts straight to a short spoken word piece mourning a lost love. The writing is a little clunky here at times, but the tone of Manders’ voice cuts straight to the core. It cracks and trembles, almost struggling to get the words out. This is a vulnerable moment; this story is personal and very real, and you’d be hard-pressed not to be moved by it.

This theme of heartbreak continues into the next track ‘Nothing Matters’. A constant echo adds a shimmering, dream-like quality to the song. Manders’ vocals are softer and more fragile, sounding truly adrift and lost. ‘Paper Castles’ looks more outward, observing the issues of homelessness and how a comfortable life can disappear in an instant. Minimal bass and guitar backing are added, which sadly do not always play in the tracks favour. The instrumental middle section fails to punch through with the same amount of intensity as the rest of the song, and the fade out feels rushed and clumsy. However, ‘Paper Castles’ is without a doubt Millie’s best vocal performance on the EP, at least from a conventional standpoint as she gracefully swoops between registers effortlessly, and is an absolute joy to behold.

The closing track, ‘Monster’, is by far the most unique track on the EP. With heavy chorus and distortion added to the uke, the frantic, scratchy playing creates an effect that really gets under the skin and the resulting noise almost sounds like something Warren Ellis would be carving into a modern Bad Seeds album. It’s like nails being dragged across the brain and it’s impossible to feel comfortable while listening. However, given the song’s focus on struggles with mental illness, it’s entirely fitting. Millie once again shows off her impressive vocal skills on this one, erratically jumping from tender, breathy moments to belted choruses and guttural, animalistic growls, as if she is battling with the eponymous monster inside her head.

There’s so much deep meaning pack into ‘Upside Down’ that even the title is hugely relevant. This truly is Millie Manders taking her career to date and flipping it on its head, stripping away the high octane band arrangements and getting down to something much more intense. These songs may not contain the same catchy hooks as some of her previous work and there are fewer singalong moments to be found, but that only invites the listener to invest more in lyrics and raw emotion on display. This is the sound of an artist leaving themselves truly exposed through their music in a way that many will relate to, and it needs to be heard right now.

‘Upside Down’ is out Friday 23rd March.