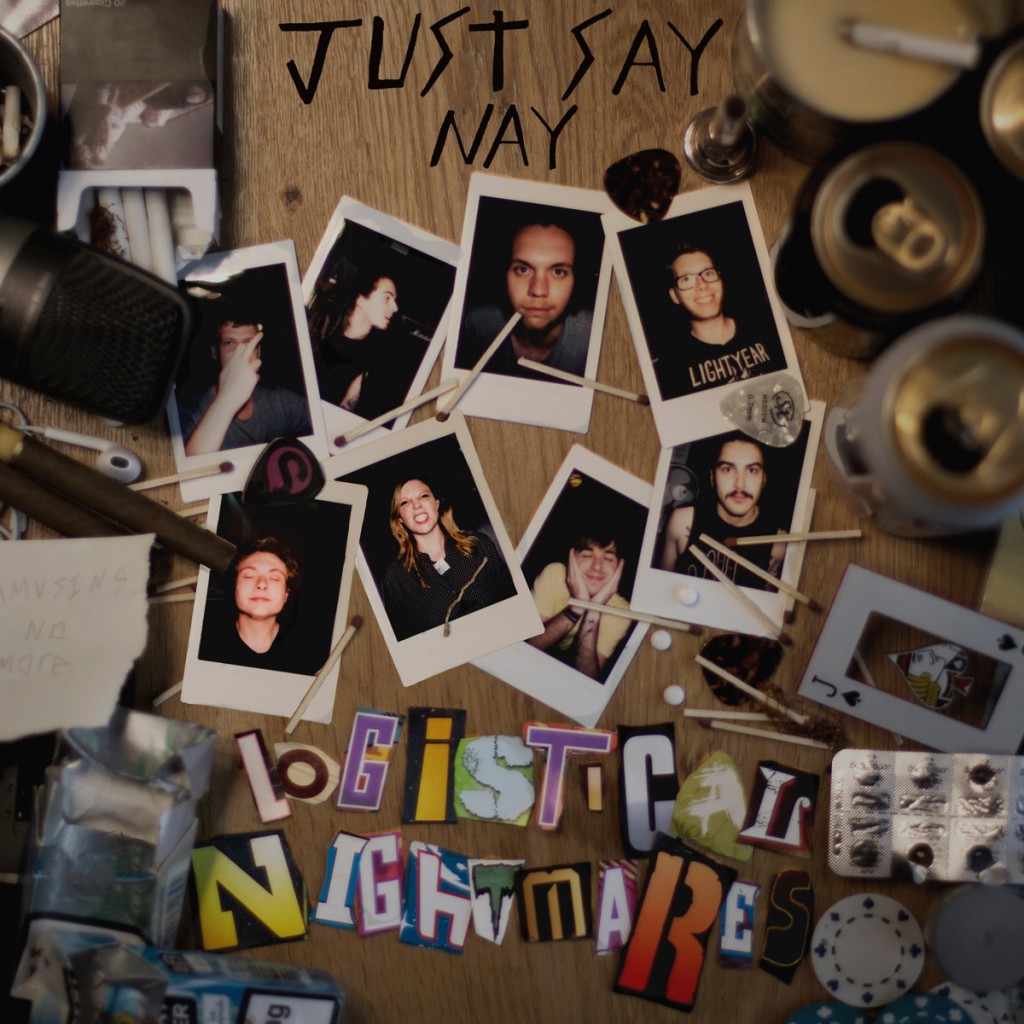 It’s been one hell of a year for Just Say Nay. Scarcely two years running, 2017 has seen the release of their debut Shit Out Of Luck EP, home of irrepressible early-morning-bus-stop earworm ‘Low Blow’, their graveyard shift at BoomTown (one of our highlights), and a heartfelt set at Cramp In Your Leg Fest, a three day festival held at London’s New Cross Inn in memory of Mike Crampton, Pisdicables keys player and a close friend/collaborator of the group who tragically passed away earlier in April. With the year drawing to a close and Just Say Nay showing little sign of slowing, many are wondering whether this eight-strong monster of a band keep the ball rolling with their imminent follow up, Logistical Nightmares.

It’s always important to kick off any EP with a bang, and Just Say Nay don’t disappoint with ‘Pass Me A Cloud’. As relentless as it is fantastic, it is the most ambitious and varied song on the record. The track blends punk riffs, metal dual-guitar lines, rumbling bass breaks and furious horn snatches with a chorus as memorable as they come, invoking a slight Random Hand-esque feel in the process. Fans of the band will be sure to have a sense of joyful familiarity throughout, as the material on display has been featured proudly among their live sets for a while now. Some the best moments on the EP come from ‘Jiggy Bean’, a giddy little love story that makes it impossible to keep your feet still. The horn section is truly on point here, producing lines that stick in the brain and bring a smile to the face, and the single-guitar-and-vocal-only outro is a subtle touch that rounds things off superbly. That being said, the drums do feel a bit out of place during the choruses, and a slightly more laidback approach might have suited the song itself better.

‘KPSD’ cements the overall heavier feel of the EP, with roaring guitars punctuating throughout and searing horns that would send chills down anyone’s spine. It is a deceptively complex number, flowing freely through a host of tempo and rhythm changes that keeps everything fresh. Logistical Nightmares ends with ‘Mr Plank Goes To Town’ (no, they don’t know either). While maybe not the strongest song here, it’s got some strong competition, and is a more than competent conclusion to the EP. The chorus is pure fist-pumping goodness, and the folky guitar refrain clearly demonstrates a band bursting with musical ideas.

Logistical Nightmares is a fine effort, and is a welcome addition to the Just Say Nay canon. It’s not perfect; the songs may not be quite as catchy as those on their previous release, and the mixing has left the horn section lacking the necessary punch on occasion, and for such solid melodies to get briefly lost is a real shame. However, Logistical Nightmares is the sound of a band exploring their horizons and experimenting with what they can achieve. Their dabbling into a heavier sound with hints of a wide array of musical influences makes for some exciting moments, and if anything catches their live energy better than Shit Out Of Luck ever did. Our advice for newcomers: buy the first EP. Then the second. Then get down to a show. You won’t regret it.

Logistical Nightmares is out 20th October.