EP Review: Busty and the Bass – The ET Suite 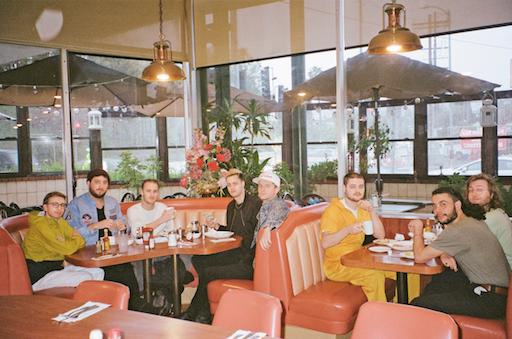 Jazz-funk octet Busty and the Bass have returned with their new “genre-fluid” EP The ET Suite. The EP follows the release of the Canadian troupe’s 2020 full-length album Eddie and features four remixes of track ET.

We’re thrown into the sounds of an intergalactic world right from the off with ET. A heavy, thumping bassline grabs the listener and the swirling sounds of a space ship preparing for launch sweeps us up in its cosmic embrace. Nick Ferraro’s vocals are choppy and manipulated as if trying to communicate through a weak signal from a faraway planet. The lyrics are very clever and feature countless space references, opening with “I’m trying to get us out of here, this planet isn’t right for us. And neither is this atmosphere.” The track has been produced in Busty and the Bass’ signature style which creates a multi-layered and multi-instrument soundscape with incredible depth. The chorus is catchy and addictive: “Extra Terrestrial, riding round on shooting stars. Extra Terrestrial, playing songs on old guitars. Extra Terrestrial, Jupiter and Mars” and the long notes on the synths and other electronic elements really add to the feeling of being out traveling through the galaxy. The funky rap breakdown layered over the chorus with trumpets fighting for attention is when the track fully comes into its best and I can imagine it bringing quite the party atmosphere when performed in a live setting.

The rest of the EP consists of four reworkings of the original ET track. The first of these is ET Part II: Venus, a more pared back version of the original. The deep bassline and synths still feature but we’re treated to the beautiful honey tones of Kallitechnis as she sings with a smooth jazzy tone. Terrell Morris and Tika The Creator also feature on this version which moves from gentle strings and hand drums to full-on funk at the strum of a guitar.

ET Part III: Jupiter has a deep, funky vibe right from the off, with the trumpets taking centre stage. The track features Verdine White of Earth, Wind and Fire bringing his signature flair to the bass guitar.

ET Part IV: Neptune opens with a gentle sprinkling of keys and the otherworldly vocal of Pierre Kwenders. The piano lends a more relaxed atmosphere to this version: less hurtling through space, more gentle exploration of a new world.

ET Part V: Mars takes us in a very different direction entirely. This instrumental version is a cascade of sound, all the drums, trumpets and strings clashing and competing against each other until a synth-led harmony is found. Perhaps this is a nod towards Mars the God of War and intergalactic warfare. As harmony is reached the track ends with the sound of an alarm clock, bringing the odyssey to an end and making us wonder if it was all just a dream.

When speaking of the EP, trombone player Chris Vincent said: “Contrary to how we’ve recorded in the past, every element of this was recorded in isolation. There were lots of discussions and listening sessions but as far as the recording process went, each instrument was recorded completely independently. This ended up playing into the themes of the music. The ET Suite is really a space traveling journey from one isolated planet to the next and that transportation to different spaces is exactly how the creative process worked.”

With The ET Suite, Busty and the Bass have created a whole narrative across five tracks which take us on a whirlwind tour through the universe and back. Further adding to the theme of space exploration, a UFO-themed game has been developed by Alvaro Salvagno where the player must find every band member and beam them up in their space craft so they can all play ET on the moon. It’s great fun and a brilliant way to properly immerse yourself in the track. Give it a go here.

The eight members of Busty and the Bass met during their first week as students in the jazz program at McGill University in Montreal back in 2011. They gigged as much as they could and then went on to release two EPs – GLAM (2015) and LIFT (2016) – before releasing their debut album Uncommon Good in 2017. Their most recent album, Eddie, was released in the summer of 2020 and featured collaborations with artists across the funk and soul genre such as George Clinton and Macy Gray. They have taken to the stage at many festivals such as Montreal International Jazz Festival, The Great Escape and Ottawa Bluesfest.

The ET Suite is available to stream now. Find out more about Busty and the Bass here and have a listen to The ET Suite below.