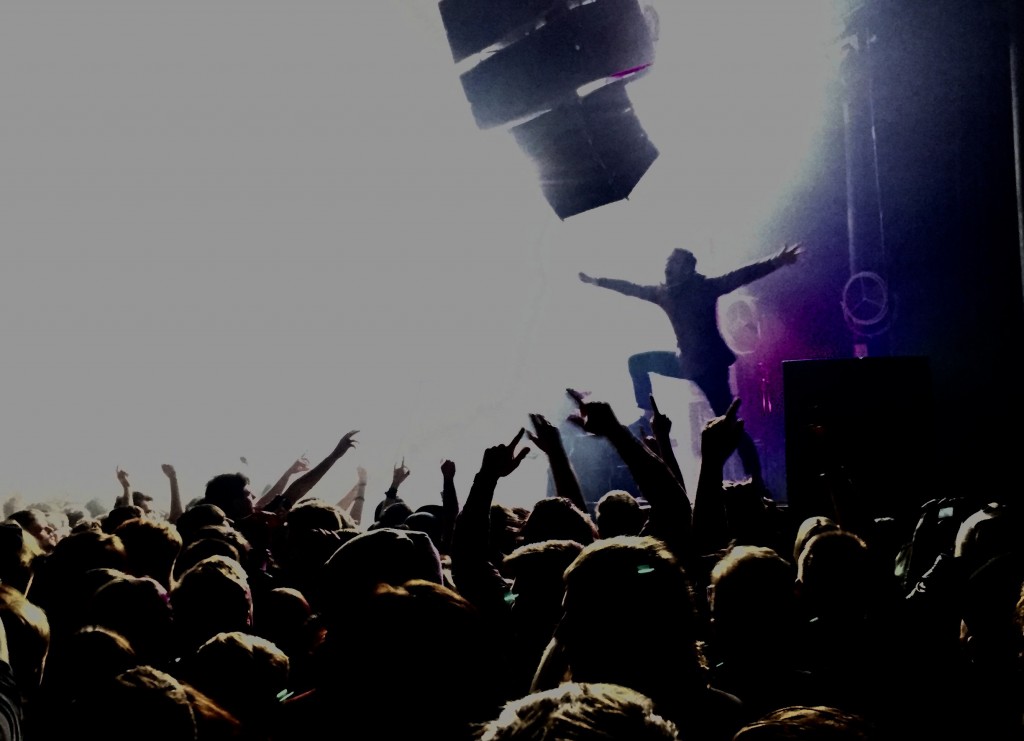 It’s been just under 9 years since I last saw Enter Shikari live. A weedy, tight-jeaned kid with a studded belt and a haircut I’d later regret on my driving license, walking into Wolverhampton’s Civic Hall half drunk on adrenalin and 4 cans of warm lager. But I know the excitement I was feeling tonight at London’s Roundhouse was more than it ever was back then. For one I can buy warm beer from behind the bar now.

Excited for a few reasons really. Enter Shikari have progressed massively with their music and their productions. Secondly I continue to be a huge fan of of their music and of them, so I’m here for my own pleasure as much as anything else. Thirdly, the supporting line-up is down right exciting, with one band being a particular favourite of mine.

Opening the night were Fatherson, a Glaswegian three-piece making excellent rock music that’s easy on the ears which has formed to create the band’s debut album ‘I Am An Island’ which came out last year.

Next one the bill was Leeds’ finest and Fortitude favorite’s Allusondrugs. What can we even say about this band? The grunge/psych style of rock these fellas put out is just exciting in every way, topped off with hypnotic vocals and riffs that just make you want to move. Latest single ‘Am I Weird?’ goes down a storm, with the band displaying their typical just-fucking-go-for-it attitude throwing themselves and their instruments around the stage, never missing a beat, with front-man Jason (who, by the way was sporting a rather fetching woolen sweater) warmed the crowd up with another surreal performance. Finishing with the raucous ‘Cherry Pie’ the band went all out, and to me played like they owned the place, a band so comfortable with what they’re doing that you can’t turn away.

After a quick pint, on came Kent’s Feed The Rhino. After a listening to 2014’s ‘The Sorrow And The Sound’ I was pretty excited for what the band had to offer and so were the crowd; with cheers erupting as the band burst onto the stage. Front-man Lee Tobin drew every ounce of energy out of this London audience, spending just as much time in the crowd as on stage. The band themselves were tight as a nut and exactly what we needed in preparation for the coming Shikari-storm. The Roundhouse became a vortex of sweaty bodies as Lee conducted what must have been the world’s biggest indoor circle pit.

In typical lovely Shikari fashion we were treated to a pre-show treat of dance classics, before the lights went down and Shikari’s impressive lighting rig went up. Opener ‘The Appeal & The Mindsweep I’ set the tone for the night with every member of the crowd screaming back Rou’s lyrics.

Charisma oozed off the stage as Rou, Chris, Rory and Rob bounced off each other, with the occasional minor-assault in the form of a thrown drumstick. We were treated to a set built with anthems from the band’s latest album, singles ‘The Last Garrison’, ‘Anaesthetist’ and the legendary fan favourite ‘Slipshod’ to name a few, with the occasional trip down memory lane with the return of ‘Ghandi mate, Ghandi’, ‘Radiate’ and topped off for me by the addition of ‘Mothership’ from Shikari’s first album back in 2007 – at this point I can’t say I can recall much as I blacked out and later found myself walking out of a pit on the other side of the room with a few sore ribs. It happens.

What really made this show memorable was what Rou summed up perfectly in a mid-set speech. Last night, and I assume every show the band has done on this tour, the audience and the band were a community. Them to us. Us to them. Multi-directional. Not One-Direction. You could feel that community personified with every second of silence, the crowd taking up the chant “…and still we will be here standing like statues.” A testament to what this band can/has/and will continue to do for their community.

To me Enter Shikari remain a band that I can (evidently) lose my shit to, yet come away deep in thought. Not many can do that and I stand in awe of them.