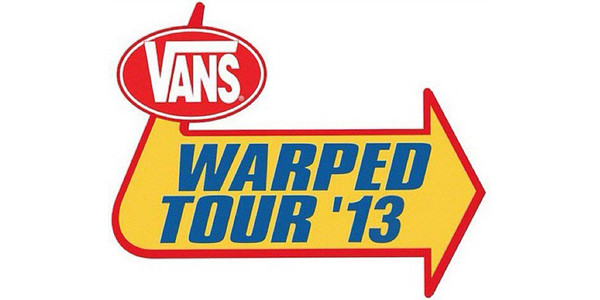 Held at London’s historic Alexandra Palace on November 16th and 17th, the 2013 UK leg of the VANS WARPED TOUR has now been boosted with the news that Enter Shikari and Parkway Drive will join the previously announced Rise Against and Billy Talent as headliners.

Continuing their self-proclaimed mission statement to “abuse music’s worthless genre boundaries”, St. Albans quartet ENTER SHIKARI’S visceral live experience is set to shake the foundations of Alexandra Palace when they hit WARPED. Since their third album ‘A Flash Flood of Colour’ crashed into the charts at #4, the band have delivered their genre-colliding sound to Europe, North America, Oceania and Japan. WARPED represents their first major London show since they closed 2012 with two major shows at the prestigious Roundhouse venue.

Its an honour to even play let alone headline! and being able to experience that Warped Tour vibe and not have to be crammed into a 400 ton cylindrical object 36,000 feet above the ground for 9 hours is great!   Alexandra Palace is such a smashing venue too, very salubrious.  If I was a lame-ass, (and I’m not) I’d say we were gonna give this gig 110%. But seeing as that isn’t physically possible (and, as we’ve established, I’m not a lame ass) I won’t say that”.

Since blasting out of their hometown of Byron Bay on Australia’s east coast, Parkway Drive’s blend of power, charisma and uncompromising metallic hardcore has captivated audiences the world over. After first hitting the Australian charts with their debut album ‘Killing With A Smile’ and hitting the Top 10 with ‘Horizons’, their third album ‘Deep Blue’ spread word of their talents to a wider international audience – and last year’s ‘Atlas’ cemented their growing stature, all the while expanding their sonic palette while moving into brave new sounds.

Says vocalist Winston McCall: “We are unbelievably excited and honoured to be part of Warped Tour UK 2013! Warped Tour has been a massive part of this band’s lives from before Parkway even existed so to be kicking it in the UK with such an amazing line-up is going to be mental!”

The ascension of Escape the Fate has reached a new level with the recent release of their fourth album ‘Ungrateful’ – helped in part by the popularity of the title track which has passed 1.7 million views on YouTube. Fronted by the irrepressible Craig Mabbitt, the WARPED show represents the first time that the Las Vegas band have played in the capital since the release of the album, and their knack for blending aggression and melody is sure to receive a roar of approval.

The full line-up is as below. In keeping with the finest traditions of the VANS WARPED TOUR, the running order is to be decided on the day:

In addition, a breathtaking extreme sports display will appear alongside the musical banquet, as well as dozens of stalls in a bigger merch market, which offers not only items from all the bands playing but also the chance to meet some of them at spontaneous signing sessions.

Both weekend (priced £75) and single day tickets (priced £40) for VANS WARPED TOUR in London are on-sale now at http://vanswarpedtouruk.com/.  As usual, the running order is to be decided on the day, and this year you may even see some surprise appearances from a select few bands who decide one show at WARPED is not enough and join for both days.