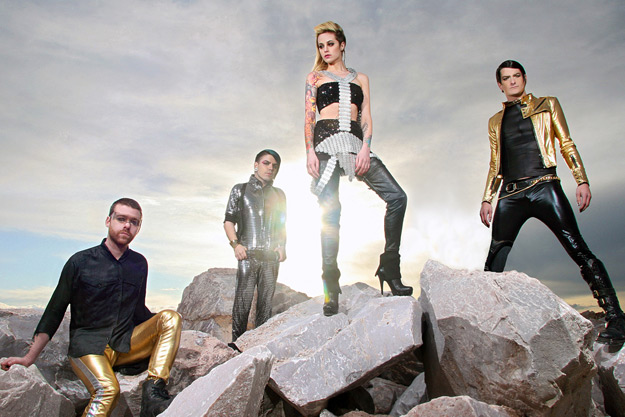 Acclaimed American house DJ and producer Andy Caldwell has taken the electro sound of Shiny Toy Guns’ original ‘Somewhere To Hide’ and fashioned a euphoric, summery track which fits in perfect with the changing season!

Forthcoming single “Somewhere To Hide” is taken from the album III, released in North America at the end of 2012, just in time for Associated Press to deem it one of their Top 10 Albums of the Year: The album also attracted rave reviews from publications such as USA Today, Billboard and Alternative Press, while the influential LA radio station KROQ named singer Carah Faye on its list of ‘Rock’s New Leading Ladies 2013’ alongside Florence Welch, Brittany Howard (Alabama Shakes), Alexis Krauss (Sleigh Bells) and Neyla Pekarek (The Lumineers).

Back from the abyss, the Los Angeles-based Shiny Toy Guns have triumphantly re-emerged firing on all cylinders with their new album III, reuniting the original quartet whose unique brand of synth-pop and DIY ethic initially made them worldwide sensations back in 2007. Refining their signature electronic sound, it is a collection of exuberant, intensely personal songs about life, love, loss and redemption.

Check out the remix of ‘Somewhere To Hide’ below:

Relationships had become frayed following years of unrelenting touring behind We Are Pilots, which they had initially self-released in 2005 after having already been on the road for more than two years. Selling thousands of copies out of their van, the album was later picked up by Universal for worldwide release.

“We had been playing 300 shows a year, sometimes two a day, sometimes not even in the same city,” says Dawson. “When you’re living in a bus or airplane, you don’t have the ability to deal with real-life trauma. Things started to fester as we were robotically going through the motions. Nobody stopped us, nobody told us to take a break — we never dealt with our issues and the band broke down.”

So Shiny Toy Guns are back to their four essential parts, with III serving as a document of what friends who have been through the wars can achieve. While not a literal chronicle of what Dawson jokingly calls “the reality show that is Shiny Toy Guns,” it nods to mile markers in the quartet’s rejuvenation — most obviously in the song Carrie with Faye and Petree trading verses and delivering both sides of the band’s story.

‘Somewhere To Hide’ will be released in the UK and mainland Europe on the Five Seven Music label on May 13th 2013, followed by ‘III’ a week later. Distribution is via EMI.