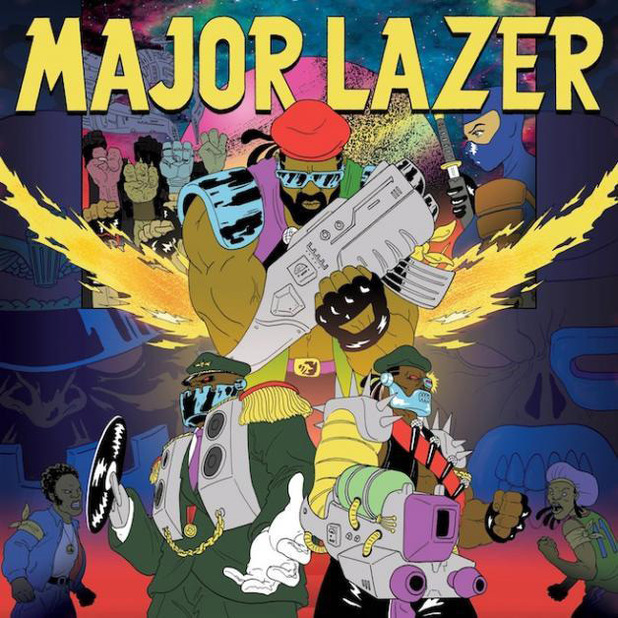 Out on April 15th the new Major Lazer Album is Free The Universe. Following his debut in 2009 (Guns Don’t Kill People… Lazers Do) Major Lazer is a side project of DJ/producer Diplo. Major Lazers style of reggae/ dancehall/ electro is back with a vengeance  and he’s brought some friends along too including Laidback Luke, Shaggy, Wyclef Jean, Bruno Mars, Vampire Weekends Ezra Koenig and Flux Pavilion to name just a few.

The first track of the album is the slow and sexy “You’re No Good”. With its huge bad ass beat and computer grunts for the chorus, this track is a piece of art. The bass hits echo just the right amount to give a sense of dark and brooding clubs that you know you should to stay away from but the beats are just too good.  Featuring Santigold, Vybz Kartel, Danielle Haim and Yasmin the vocals and rap are reverbed to continue the atmospheric sound.

“Get Free” starts out with a small battle cry from Amber of Dirty Projectors and very sharp guitar solo but then it drops into a laidback reggae rhythm that demands head bobbing. Different sounds fade in and out with ease over the relaxing reggae rhythm from the organ, bass and drums as Amber’s vocals glide over the top but still managing to hold onto some of the sharp edges in her voice. The chorus keeps the style of the track and adds to it with a hint of dance, synths build and fade alongside various organs and a trombone. This track is just pure class.

The latest single to be taken from Free The Universe is “Watch Out For This” (Bumaye) , a heady mix of trombones, squelchy snyth ,big bass hits and fast flow from  Busy Signal, The Flexican and FS Green.

Free The Universe has toned down the eccentrics of Guns Don’t Kill People… Lazers Do but still kept its brilliant edge.

Watch the video for Watch Out For This (Bumaye):