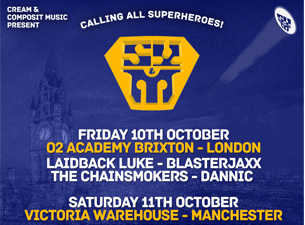 Laidback Luke is back in the UK this October for two exclusive You&Me parties in London and Manchester.

Cream are pleased to announce the return of Laiback Luke to the UK with two exclusive ‘Super You&Me’ shows in London Brixton Academy and Manchester Victoria Warehouse.

One of dance music’s biggest innovators, Laidback Luke continually breaks the musical mould and has created the ‘Super You&Me’ event as a party concept, which brings the fun factor back to the dancefloor. It’s a party created were the artists don’t take themselves too seriously and fans are invited to join in with the superhero theme.

The two date’s are full of some of the biggest emerging DJ’s and Producers including Blasterjaxx and Chainsmokers, the ‘Super You&Me’ party heads to London on October 10th then Manchester the following night on October 11th, line-ups are below:

Tickets for both events can be bought here.