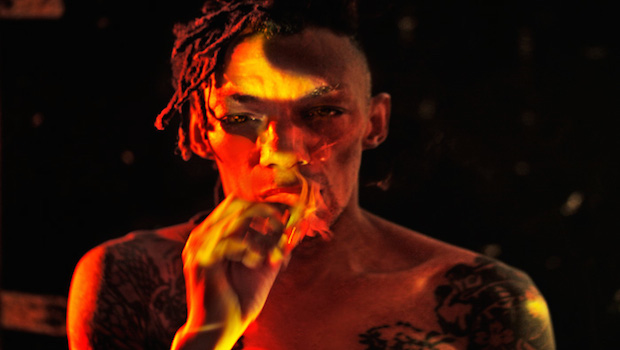 Tricky is often credited a king of his craft among his peers in the nebulous world of Trip Hop.

On his new album, the chronic cognoscente of experimentalism has found himself in unfamiliar territory that dabbles in contemporary genres (As he himself has described this album as his “Club/Hip Hop” effort) but keeps the three constituents needed for a Tricky album; heavy weighted world-weariness, aural paranoia and his signature spoken-word rap-flow dominated by a sinister liquor-soaked snarl.

‘Adrian Thaws’, the semi-eponymous tenth effort, opens in familiar Tricky territory with ‘Sun Down’, laden with dense beats and a claustrophobic aura with vocals from a new collaborator, Tirzah. The track revolves around the lyric “Keep you in the back of my mind”, and it is delivered with such believability, that you find yourself tormented by the sense of being watched.

‘Lonnie Listen’ features frequent guest vocalist Francesca Belmonte and rising rap artist Mykki Blanco. The cut begins with a somewhat awkward rap delivered by Tricky, but is soon saved when his nightmarish shadow is accompanied by the unfeeling drone of Belmonte’s vocals.

The album continues to show influences of Club and Hip Hop music. The dulcet smoke of ‘Nicotine Love’ has the makings to become an underground club hit; it doesn’t go anywhere, but rather zombies through the motions. Just the way it should.

The doleful distortion of FKA twigs comes to mind on the sorrowful scruff of Nneka-feature ‘Keep Me in Your Shake’, layered with menacing acoustics and blazed Trip Hop beats.

‘Gangster Chronicle’ recalls Hip Hop innovators Cypress Hill’ hit ‘Insane in The Brain’ and features a lethal rap from Bella Gotti as well as a rather unexpected sample from Massive Attack’s ‘Unfinished Sympathy’.

As an ardent Tricky listener, there isn’t much discernible material on the album when lined up with his previous spadework (Debut album Maxinquaye was nothing short of incredible). Then again, it is somewhat noticeable when he himself has described this album as his “least introspective”. That being said, the album does perform enough curveballs to maintain a level of intrigue that keeps you listening, one example being the throbbing Prodigy-infused Breakbeat of ‘Why Don’t You‘ jumping to the sunshine Soul of ‘Silly Games’.

Listen to ‘Sun Down’ below: