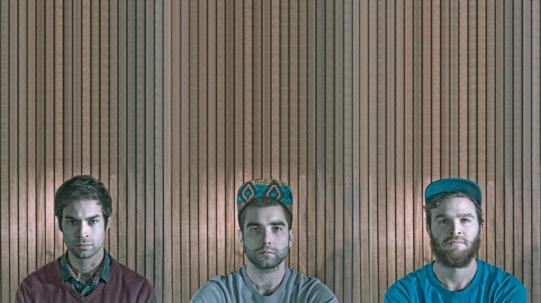 Dems’ debut record presents the perfect post-summer album. After thrashing our bodies about to endless Annie Mac DJ sets and jumping up and down to Biffy Clyro’s two hundredth T in the park appearance, ‘Muscle Memory’ readies us for a winter of calm, darkness and contemplation. The south-London trio achieve this through a dreamy electro-pop that breathes throughout the ten tracks.

Dem’s kick-off with ‘Sinking In The Sorry’, introducing you to the emotional, haunting and progressive sound of the band. The blend of piano, icy beat and soulful vocals is spot on. But make sure to pay attention to those lyrics – as beautiful as they are they can come across as muffled and unclear.
Next up is the experimental ‘Sense Of An Ending’. The poignant lyric ‘And I Must Go Back And Tell The Story Over’ is repeated throughout, layered with guitar loops and a multitude of effects. In a similar vein to the track ‘Splendor’ by M83, ‘Sense Of An Ending’ achieves an almost heaven like atmosphere, rooted in it’s church-choir like sounds. It represents the most chilled-out and dreamy track on ‘Muscle Memory’ and is a personal highlight. I would go as far to say that the track actually makes you feel like something is at an end in your own life, and something positive is just around the corner.

‘Wake’, with it’s nod towards James Blake, shows-off Moss’ vocal prowess. In a more tightly-organised and upbeat track, Moss illustrates his emotional range, particularly through the falsetto parts.
Rounding off Muscle Memory is ‘Night Tales’. Opening with the controversial, “Don’t wanna’ be your other girl anymore / Told me I was sad and beautiful”, the track builds from a chilled-out vibe to an upbeat crescendo which will certainly get gig-goers dancing. If you had time to just listen to one track to get an overall feeling of what Dem’s are about, ‘Night Tales’ is it.

As you know, many people listen to music to boost their mood or escape reality. Chart-topping ‘Happy’ by Pharrell and Pitbull’s ongoing music career are tedious testaments to this. Admittedly, Dem’s ‘Muscle Memory’ doesn’t fulfill any of these needs, so it’s unlikely to chart highly. But what makes Muscle Memory special is that it reflects openness and honesty. Life can be dark, lonely and hopeful for a lot of people. Heck, it has been for most people in this recession. This music is perfect to sit-down and reflect on the realities of life. Not many albums coming out this year can match that.

The band sum up the LP thusly “A good friend told us that the album carries ‘a hopeful darkness’ all the way through, which is a vindication of the vision we have been trying to achieve with Muscle Memory”.

Muscle Memory by Dems is out now. Preview and buy here.

Watch the official video to ‘Sense Of An Ending’ by Dems, below.