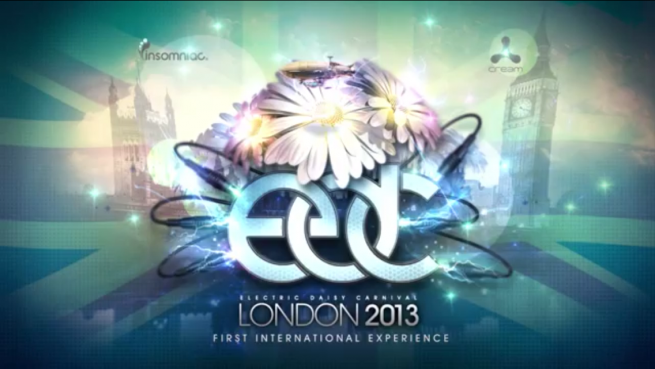 Electric Daisy Carnival London looks set to make this Summer of Love an extra special one, with a line-up that boasts some of the biggest names and freshest acts in electronic music.

Alesso has been far from shy to the Beatport Number 1 spot, and comes to Electric Daisy Carnival London ready to prove just what the fuss is about. Avicii is currently ranked Number 3 in the ‘DJ Magazine’ Top 100 DJs list, and was nominated for a Grammy this year for Best Dance Recording. Watch London electro producer Burns too.

Household name Caspa is on board. UK house producer Chris Lake comes to Electric Daisy Carnival fresh from a US tour. Dirty Dutch house supremo DJ and producer Chuckie arrives, bringing his own world-renowned sound. Crookers gets behind the decks, fresh from his remix of deadmau5 and Imogen Heap’s ‘Telemiscommunications’.

Fake Blood brings his collection of tunes so anthemic, so huge, his set will rattle the arena to the rafters. His recent release on mau5trap Records has won acclaim from all corners, and he’s an Electric Daisy Carnival veteran – and now Londoner Feed Me plays on his home turf. Fresh from the release of his brand new EP ‘Blow the Roof’, UK dubstep big gun Flux Pavilion brings a distinctive bass sound to the event.

Drum’n’bass innovator Goldie joins the ranks. Hardwell is known for his mind-blowing sets, and looks to deliver something unbelievable. He’s boss at Revealed Recordings, and his Hardwell On Air podcast is a regular in the iTunes Top Ten. DJ duo Jack Beats have remixed for the likes of Skream, Big Boi and La Roux and promise a big set. Jaguar Skills brings his electric-quick mixing and his own eclectic tune selection. Madeon is a teenage producer whose star is in the ascension, whose most recent collaboration was with Ellie Goulding on ‘Stay Awake’. Catch British wunderkind producer Mat Zo – whose May collaboration with Porter Robinson ‘Easy’ has already reached the Number 1 spot on Beatport and Hype Machine.

Mistajam has had a fantastic year with his own Speakerbox concept, pulling together some of the best scenes and skills in urban and bass music. Nero come to EDC London. With a follow-up to their debut ‘Welcome to Reality’, which reached Number 1 in the UK albums chart, under construction, this is a chance to see this big-name act. Australian twins Nervo, who co-wrote David Guetta’s Grammy-winning 2011 track ‘When Love Takes Over’, and have also worked with Afrojack and Steve Aoki, bring an undeniable stage presence.

Porter Robinson joins in the midst of his Circle Assembly Tour. His Ministry of Sound collaboration with Mat Zo, ‘Easy’, was proclaimed one of the tunes of 2013, such is its floor-filler potential. Very special guest Rusko hits heavy. One of the original pioneers of jungle, Shy FX teams up with Stamina MC. Steve Angello is a star attraction; having just launched his label imprint X, he aims to give music “freedom, fuel and new life”.