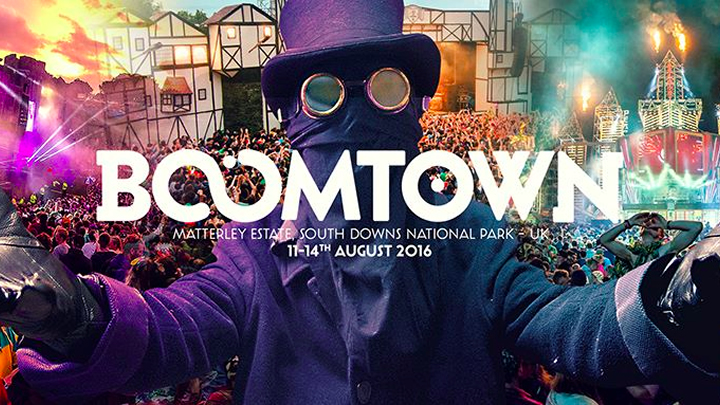 With the last 12 months having been a particularly turbulent time for us all, a brief respite revealed itself once again in the previously tranquil fields surrounding Winchester. For a few short days, revellers can pull up stakes and escape the madness of everyday life by relocating to the UK’s most extraordinary address. The town itself is more expansive and eclectic than ever, with the addition of Sector 6 to BoomTown’s many districts, and the events extensive mythos adds an atmosphere of revolution as shadowy figures can be seen ominously stalking the city streets. Whether it be the shallow extravagance of Mayfair, the twisting alleyways of Chinatown, the serene haven of Whistler’s Green or the dives and honkytonks of the Wild West, the 8th chapter of this truly unique festival caters for all. Punk, reggae, ska, jungle, dub, psychobilly, dubstep, EDM, electroswing and Balkan are among the genres represented over all four days, leaving it near impossible to leave without discovering something new. As with our coverage of BoomTown 2014 and 2015, picking just a handful of highlights is no mean feat. So without further ado, and in no particular order, we present our top 5 acts of BoomTown 2016:

Rocking up at 2pm on the Saturday, London songstress Milly Manders looked very at home on the Chinatown stage. And it’s no wonder, as her eclectic mix of punk, ska, soul and rock is BoomTown through and through. Backed by her group The Shut Up, Manders’ upbeat patter is just what’s needed to sooth the Friday hangovers of those in attendance, and the meagre early afternoon crowd multiplies exponentially during her set. The material is a mix of old and new, and the entirety of her latest E.P. Obsession Transgression is included (the adaptation of ‘Bacchus’ into an audience participation drinking game definitely receives the Fortitude seal of approval). A roaring cover of ‘Brown Eyed Girl’ ends the show, and with the crowd having warmed up their dancing shoes for the day, Millie Manders will be a welcome returning face for many BoomTowns to come.

Closing The Old Mines on Saturday night, long-running African/Celtic fusion collective Afro Celt Sound System return to BoomTown for the second time in three years. The line up is perhaps the most expansive of the entire festival, featuring well over a dozen performers including members of The Dhol Foundation, whose founder Johnny Kalsi has been a long time Afro Celt. What follows truly is a spectacle like no other, as uilleann pipes and Bodhrán blends seamlessly with a plethora of African and Indian percussion over modern dance beats. The melting pot of styles is truly staggering, and even extends to the dancing and vocals, with the languages on display including multiple Gallic and African dialects among them. The result has the entire audience entranced and helpless to resist getting caught up in the rhythm, particularly on an enthralling rendition of ‘Whirl-y-reel’, leaving all those in attendance more than prepared to file off towards the various dance stages late into the night. With their latest album ‘The Source’ released this year and several more UK dates to follow, Afro Celt Sound System are definitely a group to check out in 2016.

On of the more unexpected acts of the festival, French (via Hell) import Banane Metalik lurched into the Devil Kicks Dancehall during the early hours of Saturday morning. Visually striking from the get-go, the group utilise their freshly-exhumed appearance to deliver their own aggressive brand of psychobilly, or “gore ‘n’ roll” as they prefer to be known. Despite the late slot, BoomTown is a city that never sleeps, and band and audience alike have the energy to make this a killer set. The music is just what’s needed to get the blood pumping into the night, with furiously visceral guitars, scorching double bass lines and howling vocals, plus a good measure of on and off-stage antics thrown in. It’s acts like this that really make BoomTown what it is, and there’s a real thrill knowing that you can unintentionally stumble across music quite unlike anything you’ve previously heard or seen, but love nevertheless. Banane Metalik are definitely a band to check out with Halloween on the way, or just about any other time of year for that matter.

Something of a mainstay at BoomTown over recent years, perhaps the most well-spoken rapper on the scene returns to the Mayfair Ballroom once again, although this time flanked by the talents of Unexpected Guests and young Canadian singer/comedian Ella Jean. Famous for his light-hearted social commentary, love of all things British (namely tea), and longstanding beef with Mr. B The Gentleman Rhymer, it is all too apparent why Professor Elemental has become a household name at this festival. With his charming demeanour, astounding talent, and almost unequalled ability to work a crowd, few personify the BoomTown atmosphere quite as effectively. Skill and quirkiness are supplied in equal amounts, and with Ella even getting the opportunity to present a couple of her own tunes, there’s little better way to spend an afternoon in this manic city. Just don’t call it chap-hop, whatever you do.

It was the Queen of Irish Rockabilly herself who closed The Old Mines on the final night. In the midst of a European tour having completed her follow up to 2014’s ‘Tribal’ earlier in the year, May has her audience in the palm of her hand throughout. Her voice is in as fine a form as ever, and with her band beating out those all-familiar infectious grooves, the performance is one of ferocity, attitude and allure. Over the course of her set, Imelda May clearly demonstrates just how flexible a performer she truly is, managing in equal measure to perfect the seductive ‘Big Bad Handsome Man’, foot-stomping rocker ‘Johnny Got A Boom Boom’ and the tender ‘Baby I Love You’, the latter of which sees her voice accompanied only by bassist Al Gare on ukulele. Her appreciative and instantly-likable character draws in everyone in earshot, and the result is a fitting yet understated conclusion to this part of BoomTown 2016.