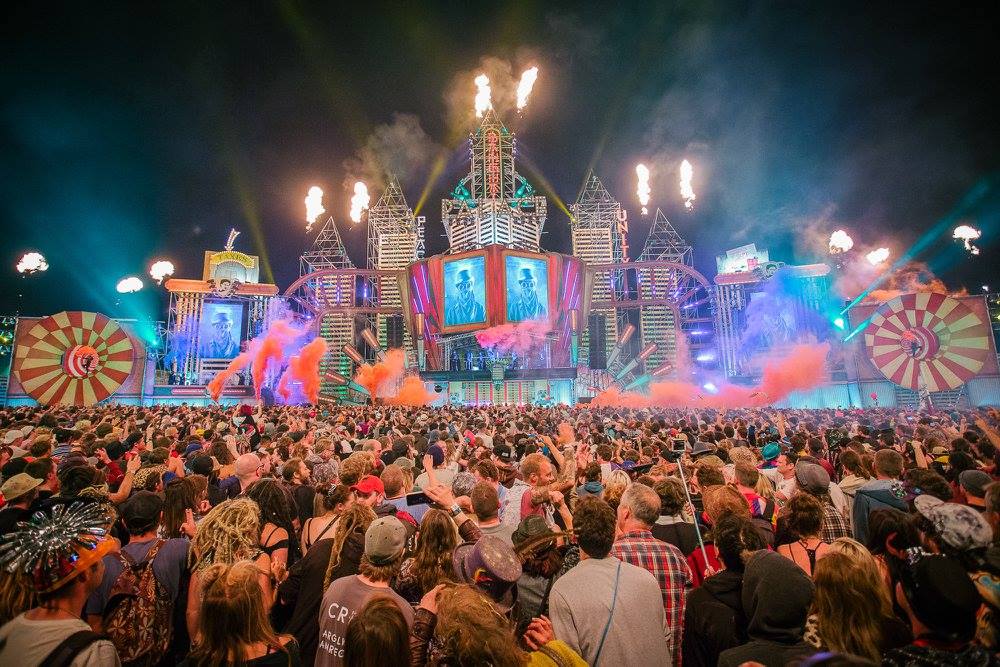 Another year and the facades of the country’s maddest city have once again landed in the heart of Hampshire. For four days, BoomTown will open its doors to the eagerly awaiting ‘residents’ for an experience few other festivals can equal. Ska, reggae, punk, psychobilly, folk, world, hip hop, electroswing, drum & bass and just about every related genre are all featured on the line up across 22 stages, whilst the various antics occurring among the winding streets and city districts adds a truly unique atmosphere. Change is on the tip of the tongue of all present, particularly in regards to Arcadia’s replacement, the nine-story Banghai Palace that now towers over the festival’s Downtown area.

With BoomTown being as expansive and eclectic as it is, trying to select standout performances is an unenviable task. This is made all the more difficult through excellent performances from returning artists such as The Skints and Backyard Rhythm Orchestra, as well as a fine Sunday show from Will Tun & The Wasters, sadly marking their frontman’s last ever BoomTown appearance. Unfortunately, there just isn’t enough time to repeat those who appeared on last year’s list, so below (in no particular order), are our new personal highlights from BoomTown 2015:

Our first act hosted the penultimate performance on the Town Centre stage. Originally part of the Holy Trinity of 2 Tone, the UK-based incarnation of the group (a second, dubbed The English Beat, simultaneously exists in the US, fronted by former guitarist and vocalist David Wakeling) has become much more of a family affair, with frontman Ranking Roger’s son Ranking Junior a permanent feature in the line up and his daughter Saffren also making an appearance for a number of songs. The material, as Roger declares, is entirely unscripted with momentary changes done on the fly. The result is a set bursting with energy, as an eclectic mix of ska, punk, rock and pop blends newer songs perfectly alongside recognised hits such as ‘Mirror In The Bathroom’, ‘Stand Down Margret’, ‘Tears Of A Clown’ and a sensational cover of The Clash’s ‘Rock The Casbah’.

If BoomTown is good for one thing, it’s discovering new or just personally-unknown music, and one of the most exciting bands over the weekend in this regard were The Carny Villains. Having just come off a stream of European dates, including Glastonbury and Wilderness, this Bristolian six-piece certainly left their mark on the Town Centre stage on Friday afternoon. Their sound, a raucous smorgasbord of swing, ska and Balkan, was the perfect antidote for those who had survived Thursday’s downpour, and couldn’t help but get a good knees-up going. Much of the set list is derived from their 2014 release Why Am I Here?, a recommended purchase for anyone keen to get their gypsy groove on.

Perhaps one of the most interesting stages on the BoomTown roster, The Old Mines offers some of the finest world music currently making the rounds. Meeting at the Institute for the Young Blind in Mali and later marrying in 1980, Amadou Bagayoko and Mariam Doumbia have since gone on to win multiple awards and become something of musical ambassadors for the region. With endorsements from the likes of Stevie Wonder and David Gilmour on their side, the couple and their band performed late on Saturday night, and it’s clear to see how they have won the praise of their plaudits. With Amadou’s dexterous, winding guitar lines and gorgeous vocal work from the pair, their hypnotic blend of blues with music from all over the African continent is a spellbinding experience, whilst the gracious and humble nature of the duo only further endears them to their audience.

As with last year’s BoomTown, one of the best acts of the weekend was saved for last. Gogol Bordello closed the Town Centre stage on Sunday night, and in terms of capturing the entire spirit of the festival, it’s hard to think of anyone more perfect for the job. With Ukrainian Eugene Hütz fronting this multinational band of musicians, what followed was a feast for the eyes and ears. The synergy of the group is staggering, with the violin of Sergey Ryabtsev shrieking through the mix terrifically as the remaining members bound about the stage. The band dart from song to song, from furious belters to emotional ballads, sending the audience into raptures at every turn. Particular highlights came in form of crowd favourites ‘Pale Tute’, ‘Not A Crime’ and ‘Wonderlust King’, getting the whole audience on their feet like people possessed, throwing themselves about in a frenzy as they expel every ounce of energy left from the weekend. It’s a fitting finish, bringing revelers together to celebrate what, for many, will be one of the most thrilling, memorable and ultimately unique experiences of the year.