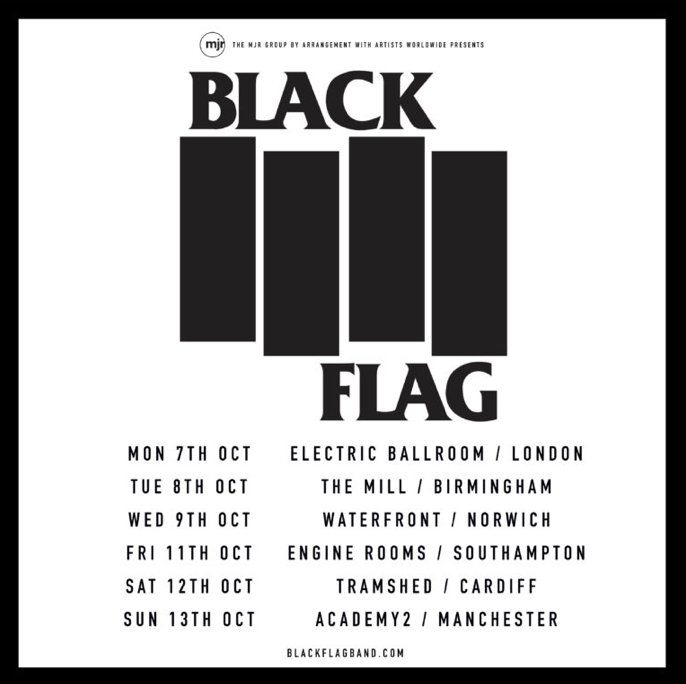 Legendary US hardcore group Black Flag are making a return to UK soil for the first time in 35 years.

The pioneering punk act last toured the UK in 1984, with Henry Rollins on vocals, Greg Ginn on guitars, Kira Roessler on bass and Bill Stephenson on drums, though returning from that line-up is only Ginn.
Legendary skateboarder and musician Mike Vallely will perform vocals after taking over in 2014, and the tour begins on October 7th at the Electric Ballroom in London, then hopping through Birmingham, Norwich, Southampton and Cardiff before then concluding in Manchester.
To commemorate the return of one punk’s most iconic acts, Fortitude Magazine presents five essential Black Flag tracks to revisit.

1: My War (1984)
The titular track to their 1984 album, which saw the band incorporate sludgy, heavy metal style instrumentation for the first time; leading to a polarizing response from punk purists. This track however is Black Flag at their most blitzing, Rollins is maniacal over Ginn’s circling buzz saw guitar, his voice cracking as he howls “You say that your my friend/ bur your one of them!- punk rock paranoia perfected.

2: Rise Above (1981)
The opening track to their iconic debut studio record Damaged, is also Henry Rollins debut recording in the band, and he makes sure to making a strong first impression. “Jealous cowards try to control! Rise above, we’re gonna rise above!” the opening lines are call to arms for all those frustrated by any establishment or societal box; born out of the increasingly hostile environment the band had found themselves in.

3: Nervous Breakdown (1979)
Featuring driving Stooges-esque guitars and Keith Morris who is superbly snotty as lead vocalist, “Nervous Breakdown” sounds more akin to the first wave of punk from a few years prior, and is an excellent starting point to jump in to Black Flag with.

4: Depression (1981)
“Depression” is a song in the Black Flag catalogue which has been re-recorded with all four primary vocalists, so which version you prefer is mainly down to personal preference. I myself jump to Rollins performance on the recoding from Damaged, though for the sake of variety the Ron Reyes version is the one that makes this list, though the song harnesses an urgent, unhinged energy that makes it a compelling listen no matter which singer is behind the mic.

5: Six Pack (1981)
A signature Black Flag track which echoes the straight edge movement found in the US hardcore scene, here Ginn’s words lampooning beer guzzling layabouts are executed perfectly by Rollins (his version only slightly improving upon the Dez Cadena version released months prior). Chuck Dukowski’s iconic opening bassline is ominous and the smirking opening from Rollins “I’ve a six-pack, and nothing to do/ I’ve a six-pack and I don’t need you!” is only bettered by the equally sardonic ending comment “what do they know about partying? Or anything else?”