#throwbackthursday: Simon & Garfunkel – I Am A Rock 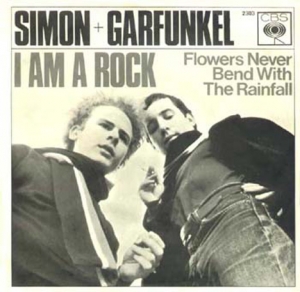 Summer is over and winter is drawing in, it’s time to get out your keepsake-box and throw back in all those old ‘Beach Boys‘ records, put on the kettle and saddle up by a stereo, prepare for soft songs of serenity and discovery, written with frosty hands in the pre-winter light on serene steel-string guitars and sung by the sweet voices of soothing souls, suffering the post-summer blues…

Who better to kick off the autumn than the American due that sent chills down our spines with songs like ‘Sounds Of Silence‘ and ‘Homeward-Bound‘, if there ever was an artist that had the nature of pathetic fallacy down to a key, it was Paul Simon and Art Garfunkel.
Taken from the ‘Sounds of silence‘ Album, ‘April Come She Will‘ tells the story of the seasons changing to a haunting backing melody and chilling acoustic guitar. The story is tied sweetly together by the echo’s of Paul’s and Artie’s dreary harmonies, which have stood the test of time and proven they can still ease our hearts and souls to this very day, It is only right that if one artist could start our musical journey from Summer through to Autumn there was no doubt it was going to be these boys.