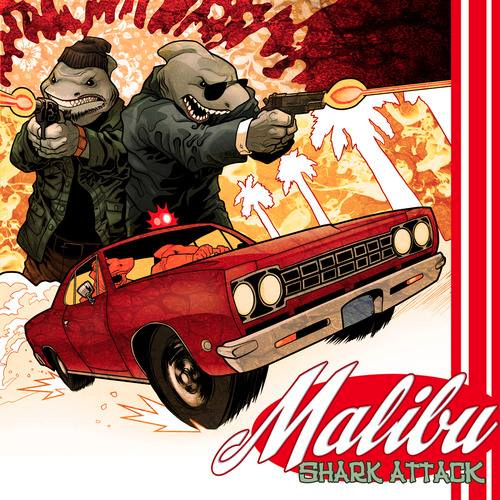 A brilliantly titled artist or track always grabs my attention when searching for new tunes, and with a name like Malibu Shark Attack! I was in hook, line and sinker.

So who exactly are the greatly named Malibu Shark Attack!, they describe themselves as a “Trans-Atlantic Indie-rap group” featuring Rocky O’Reilly & Tribe One with lots of guests.  Rocky is based in Belfast and Tribe One resides in Atlanta, America, making for one true trans-Atlantic pairing. The pair have been making music together for a while via the web, “We finally talked to each other yesterday! Thankfully neither person appears to be a maniac…”

On first listen to “Doing It Wrong” it sounded less ‘hooky soundscapes’ and more simplistic hipster mess. On further replays the track grabbed me with its positive message and nerdy lines such as “… I wanted to be Batman!”, and still hasn’t let go.

I know ‘Doing It Wrong’ isn’t the hippest of tracks out at the moment and you can’t analyse down to the smallest detail, but a good track is always a good track.

Listen to Doing It Wrong here: