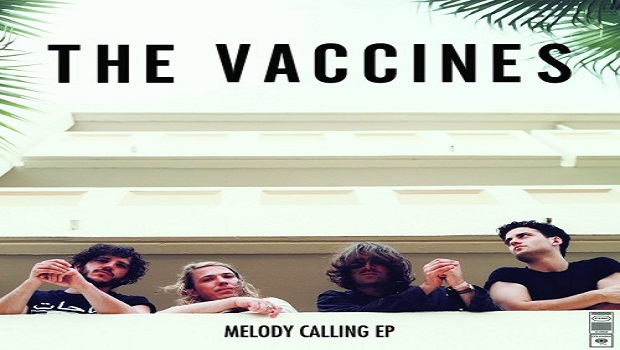 Since their debut What Did You Expect From The Vaccines? back in 2011, The Vaccines have racked up a number of killer indie tunes and no less than three awards.

After a quirky and traditionally indie debut album with hits like Post Break-Up Sex and If You Wanna, they evolved into something a little more edgy with their 2012 album Come Of Age. I Always Knew and No Hope took a darker turn, although the album was tinged with glimpses of the past in Teenage Icon. The band have now announced an EP to be released in preparation for their next full release. Speaking about the four track Melody Calling, singer Justin Young has said:

“We recorded a few songs in LA last month with John Hill and Rich Costey and we’re just working out what to do with them. They feel like a bridge to something else so I guess they’ll be an EP but I guess there is a small chance they might be the start of album three, because I feel very creative at the moment. They feel quite different so it’s exciting. We’re trying a lot of things for the first time.”

It begins with Melody Calling, which is a bluesy-style indie song not dissimilar to the Come Of Age tracks. A rhythmic riff starts it off and it sticks around throughout the song. Justin’s dark, murmured vocals begin and the whole thing becomes shrouded in a mist of drums and guitar licks. Ghostly backing vocals surface on occasion adding to the dark tones and there’s a definite chanting motion to the vocal delivery of the chorus. It’s a catchy, radio-ready track but with a lot of mystery and darkness to delve through.

Do You Want A Man has a chilled guitar and militant drums which are interspersed with some darker, alternative riffs which growl their way through. It’s the one track on the EP that I thought was something a little different to what we’ve heard from them before and could therefore be the best reflection of where they’re likely to go next. The chorus is delivered via layers of vocal harmonies which makes for an interesting effect. However, the repetition of the title gets a bit tedious and you’re left wanting a bit in the lyric department.

On to Everybody’s Gonna Let You Down, which is a laid-back indie number with that retro vibe adopted on Come Of Age. It could have belonged on their last album in fact although it isn’t quite as upbeat. A singing guitar leads you through the indie anthem which is told through Justin’s smoky vocals set to a catchy riff. As the title suggests, there is an air of cynicism and as a result it’s the stroppy teenager of the EP. It sticks rigidly to what it knows and has a negative view on the world, which of course isn’t unlike many Vaccines singles.

Ending on a remix of Do You Want A Man, produced by Rich Costey and John Hill, the LA duo who The Vaccines have been working with. The marching drums are still there but the guitars bubble over the top of them in the re-worked version. Justin’s vocals are largely drowned out by the instruments but weirdly, it begins to take on a summer country vibe which isn’t there in the original. The glitches of the electronica add a new dimension and it’s a refreshing change from the straightforward indie provided by the band.

Overall, it’s an EP that will be popular with existing Vaccines fans. However, it’s not far enough from their usual sound to win them any new ones. It would seem that we are yet to see another musical shift from the band who grew up between album one and album two. Perhaps the darker, cooler stuff is here to stay.