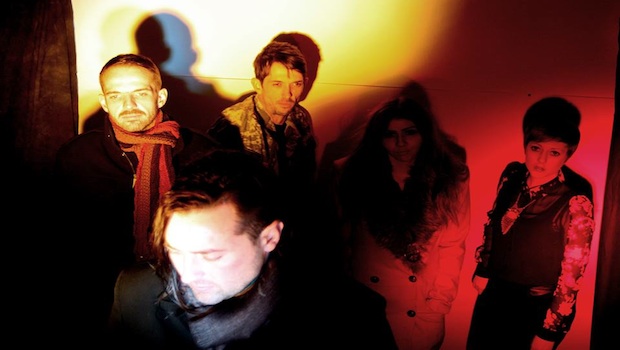 LVLS are a Manchester based five piece, who began to gain the attention of bloggers and music types throughout 2013 with a self released EP and double a-side single, receiving airplay from BBC 6 Music’s Tom Robinson, and appearing on September’s National BBC Introducing mix-tape.

2014 looks set the be another big year in the band’s uprising with the release of new EP Teenager, and some tasty looking live shows, including support slots with acts such as Matthew and the Atlas.

‘We met at a funeral’ sounds like the tagline of a goth metal band, but the band in question don’t immediately sound quite as dark as this self penned phrase may suggest. However, there are sinister themes below the surface of their synth, indie pop style.

Opening track Echoes features driving rhythms, 80s inspired synths and one hell of a catchy chorus, which sees vocalist Jay Gibb declaring ‘there’s no way out’. These lyrics in particular could be a hint towards some of the darker undertones of LVLS’ music, which is noticeable throughout most of their tracks, especially Suzi Shoes. The track is a haunting, sinister A-Cappella song, which in the best way possible sounds like Glee after years of drug abuse. The lyrics to this track are equally gloomy, and the repetition of ‘there’s a body at the side of the road’ conjures up particularly dark images. Final track Young & Cruel is somewhat of an anomaly, as it has an instantly more upbeat feel, and the prominent guitars give it a more typical indie rock sound. Gibb’s deep croon is reminiscent of the Horror’s Faris Badwan, and is a particular highlight throughout the entirety of the record.

Teenager may be a short taste of what Gibb and Co. have to offer, and feels as if it ends just as it’s getting started, however could be an exciting hint at what the future holds for the band. It might still be early days in their career but LVLS have shown that they’ve got all the tools and songwriting ability to go far.