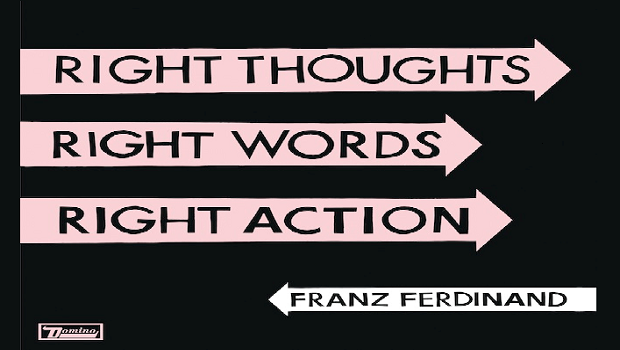 The upcoming Franz Ferdinand album has been a long time coming, so there was a lot of anticipation surrounding it.

In fact, it’s the first time we’ve heard anything new from the Glasgow indie outfit since 2009. Singles ‘Right Action’ and ‘Love Illumination’ have already had videos revealed, so we’ve had a glimpse of just what Alex Kapranos and the boys have been up to over the past four years.

Indeed, it isn’t a million miles away from what they’ve shown us before. The bouncy indie which is prone to the odd dark moment is still very much alive but there is a bit of an electronica twist on a few of the new tracks. Alex has described that the album deals with “the idea of the cynic’s search for optimism and the sceptic’s search for a manual”.

It begins with ‘Right Action’, a funky riff and tribal motif on the instruments. There is the angry-mob style in the backing vocals and Alex’s husky resonating lead pulls it together. The catchy riff keeps repeating which is something that the band knows works well. An upbeat earworm of a riff and rhythm that keep pounding along is what helps you remember it and this is partly why Franz Ferdinand songs often stick around.

Going all dark on ‘Evil Eye’, this is the first time there is an air of danger. It is seen again on ‘Treason! Animals’ and ‘The Universe Expanded’ although in a different light. ‘Evil Eye‘ introduces a keyboard which dances in the background of a demonic protagonist and chanting cast. It’s classic British indie with a dark edge all the way around it.

Second single ‘Love Illumination’ has an alternative rock slant to the guitars and the keyboards have a little whine in the middle. It’s a catchy and upbeat number with a great rock-out anthem attitude, which sits well between the previous dark track and the slow melancholy ‘Stand On The Horizon’. ‘Stand On The Horizon’ is a bit of a hangover from ‘Take Me Out’, which was released all those years ago except this is a much more mature version. The same bouncing demeanour is there but there is also a sophistication in the jazzy disco instrumental. The vocal harmonies with their eerie choral tones again indicate that darker things are to come.

Perhaps the most interesting track for me was ‘Fresh Strawberries’. It’s quite chilled out with the jumping rhythm that is so common in Franz Ferdinand songs but it’s a summer pop-rock song that you couldn’t easily identify as them. Comparing a blossoming relationship to strawberries ripening is a beautiful and accurate image and is perfect for a summer album.

The gateway track for me came just after in the form of ‘Bullet’. It’s fast and furious with a militant beat and a catchy sing-song chorus. Despite it’s apparent frantic nature, it’s actually a lot smoother than most of their tracks, as there is no stopping and starting. Simply charging through, it opens the door onto the new face of Franz Ferdinand as they step into a starry-eyed world of futuristic and alien-sounding tracks.

‘Treason! Animals’ being the first with its electronic beeps and bounces. The innate indie style is still present but it has been mixed with a space-age drama that shows itself through electronic spurts from a keyboard and a guitar which plays the same riff throughout the song as if it is caught in a time-loop. The egotistical lyric “I’m the king of the animals” is both a nod to typical indie kook or a possible clash between good and evil. ‘The Universe Expanded‘ is a further delve into the unknown world above us with a glitchy intro and twinkling electronics exploding the background which is fronted only by slow, downbeat vocals. It reminded me of a modernised David Bowie track and the whole fascination of putting the eerie theme of space onto songs is one that is so popular right now.

‘Brief Encounters‘ may be another hint at a space-age song and indeed, there are some high-pitched chimes and some extra-terrestrial sounding activity. It’s taken over by a catchy riff and interjecting vocals which electronica dances over expertly. It’s a sign of the door being closed again and the band reverting back to their usual sound for the final track which is ‘Goodbye Lovers and Friends’, a classic indie track with a dark twist again. The monotone backing vocals add a touch of the non-human world but all in all, the dragged out vocals and twangy guitar make for a typical Franz Ferdinand farewell.

It is an intriguing album and I’ve never heard them use so much electronic influence before. Although a lot of the album is very similar to their previous big hits, it will no doubt be another smash for them. Their fans have waited a long time for it and they aren’t likely to be disappointed.

Check out the Official Music Video for ‘Love Illumination’ below: