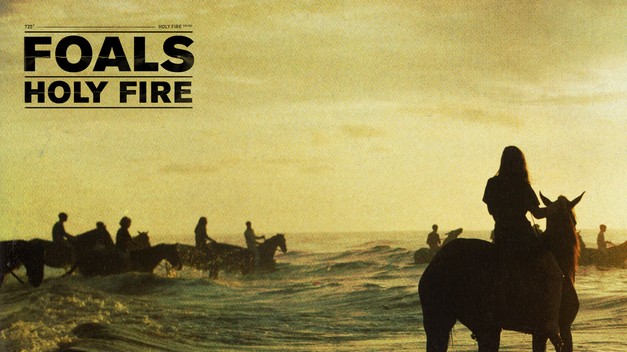 The five piece indie rockers from Oxford are back with the follow up to 2010’s ‘Total Life Forever’ with new album ‘Holy Fire’.

Growing up from the party days of first album ‘Antidotes’ with dancefloor filling anthems such as ‘Cassius’ and ‘Olympic Airways’ into more mature yet still party like tracks on second album ‘Total Life Forever’ which pushed them into mainstream success, ‘Holy Fire’ brings anthem after anthem which will surely turn them into an arena filling band.

With massive sounds right from the off with heavy basslines over mature and mellow guitar riffs on the ‘Prelude’ opener before leading tracks, the heavier sounding ‘Inhaler’ and typical old party like Foals track ‘My Number’, burst the album open, gets in your face and sets the perfect tone for the rest of the album.

‘Bad Habit’ has a similar feel to ‘My Number’ with a summer feel to the track, a song which along with ‘My Number’ is bound to be a massive track at the summer festivals.

‘Late Night’ is a slow burner which brings the best out of lead singer Yannis Philippakis lyrically, a song seemingly wrote about a love in his life, it reflects the more heavier and personal side of Foals that is becoming more of a regular sound for the band.

‘Out of the Woods’ attracts you to its heavy bassline but a song that would be beaten in a competition with the skip button, apart from this mediocre track, the rest of ‘Holy Fire’ is excellent.

The song of the album is no doubt album ending ‘Moon’, the ‘Spanish Sahara’ feeling song completely sums up ‘Holy Fire’, quite dark, heavy, lyrically excellent and great sounding songs. Foals have certainly grown up and matured into one of the best UK bands lyrically and have wrote an album that can only push them further towards main stage sets across festivals and  filling arena’s around the world.

Many predicted 2013 would be the year of ‘Guitar Music’, with Foals around writing albums like ‘Holy Fire’, guitar music is most definitely in safe hands once again.