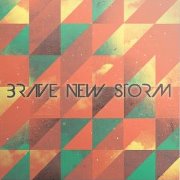 In recent years, indie has become a genre that often raises the eyebrow of the discerning muso. To some, the mere mention of its name conjures the image of a flatpack affair; built from the same mass-produced components of jangling guitars, warbling vocals and over-produced, easily-digestible hooks. However, should said listener cast their ears towards Brave New Storm’s eponymous debut EP, they may find a challenge to their preconceptions.

Although only formed in November 2011, the career of this Sheffield-based six-piece has been an eventful one. Having already performed at Wireless and Tramlines Festivals in 2012, they are also proud winners of Tuborg’s King of the Stage competition. With such astounding achievements so early on, one would not be blamed for having high expectations for this EP – and it does not disappoint. Barely pausing for breath, gang vocals hastily count in before we are thrust into the opener, ‘Young Guns’.

A distinctly atmospheric and moody affair, Thomas Sprackland’s steadily-marching drums and Matthew Peffers’ tight bass-playing form the perfect foundation for the haunting strings of Blai Covas and Michael Waller. Unlike others of their ilk who stand accused of attaching overblown tags to themselves simply for show, Brave New Storm’s self-appointed label of “indie-folk” is entirely justified. Their use of violin and cello promotes a strong element of musical tradition, whilst the atmospheric guitar work coupled with the fragile yet captivating vocals of Siobhan Bligh and Patrick English keep the band’s sound firmly in the present. ‘Do You Remember The Summer?’ follows very much in its predecessor’s footsteps, recounting a youthful romance with nostalgic intensity. The latter half of the track treats us to some beautifully reserved dual guitar work, before fading out and leaving us with an a cappella rendition of the song’s refrain, the wonderful, soaring harmonies almost Gregorian in tone.

Just at the point at which the listener wonders whether a change in pace will present itself, Brave New Storm oblige almost playfully in the form of ’4EM’. With Sprackland’s thundering drums picking up the tempo, the guitars coming forward with an infectious riff, and the melody now interspersed with energetic chants, Bligh and English partially forego their previous vocal harmonising in favour of a call-and-response singing pattern, imbuing the subjects of the song with an identity of their own. Due to the band’s demonstrable musical prowess, it is somewhat pleasing that the final track, ‘Huxley’s Island’, is an instrumental.

Not only does this showcase the musicians’ ability, it also adds to the variety of the EP as a whole. The song begins on a minimal note, the lineup consisting simply of fingerpicked acoustic guitar and bass, before building gradual accompaniment through mandolin followed by the now familiar cello and violin. The track continues to build to a crescendo, with powerful drums introduced around the halfway mark followed by the inclusion of the only instance of distorted guitar, before coming to an abrupt conclusion. ‘Huxley’s Island’ is without a doubt the highlight of the EP, its return to a more traditional folk sound forming the ideal conclusion for this remarkable young band’s first record.

Musical debuts can be a trying time for any band. More often than not, a group will still be discovering their sound and a few weak links are expected as a result. Brave New Storm, however, have really taken their first EP in their stride, and over the course of these four tracks it is clear that there was never a doubt in their minds as far as the band’s musical identity is concerned. They play with a confidence often only seen in bands many years their senior, and whilst some of their lyrical phrasing may to some come across as a bit twee, they more than make up for it with their mastery of musicianship. Brave New Storm are a band that possess a great amount of potential, and we will no doubt be hearing from them in the near future.