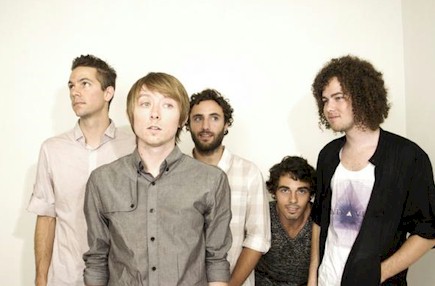 Local Natives today announce a full European tour for Spring 2013 – including a London date at Scala on 14th February 2013 – following the release of their eagerly anticipated second album Hummingbird via Infectious Music on 28 January 2013 (29 January via FrenchkissRecords in the US). Tickets for the UK dates go on sale at 9am on Friday 9th November, with London tickets priced at £13.50 (subject to booking fee), available from www.livenation.co.uk / www.ticketmaster.co.uk and tickets for all dates  available from www.thelocalnatives.com

The first song to be lifted from the record, a hazy dose of pop splendour called Breakers, is available to stream now via YouTube, and will be released on 7-inch vinyl on 3 December. The band play a short run of small European shows to mark its release, including a show at Hoxton Bar & Kitchen that sold out within minutes, and culminating in a performance at ATP curated by the National on 8 Dec.

Much has happened between the band’s critically-acclaimed debut album, ‘Gorilla Manor’, and the imminent release of ‘Hummingbird’. ‘Gorilla Manor’ launched the band onto the global stage, saw them headlining throughout America and Europe, opening for bands like Arcade Fire and The National, and winning them lauded slots at major festivals around the world.

Upon their return home from the road, the band built out a rehearsal space and studio in an abandoned bungalow in Silverlake, allowing them to write and experiment extensively with new sounds and arrangements. Keeping their uniquely collaborative process intact, the band utilized new instruments and songwriting approaches, challenging themselves to grow from the comfort space of their established aesthetic.

The band say ‘Hummingbird’ was created from the emotional framework of being stretched between two opposite poles. In the two years following ‘Gorilla Manor’s’ release, the band saw the highest highs and the lowest lows they had ever experienced together. While many of their wildest musical ambitions were coming to fruition, personal relationships faltered or fell apart, and a close family member suddenly passed away. The songs on Hummingbird embody that similar dichotomy – they are fragile and powerful, opulent and spare, tense and poised.  When it came time to properly set these songs to tape, the band did their initial tracking in Montreal, and then decamped to Brooklyn, enlisting as co-producer The National’s Aaron Dessner, whom they had recently befriended while touring together. It was the first time they had ever recorded outside their native California, and relocating became the physical manifestation of working beyond what was familiar for them.

Shining opener You & I is the album’s calling card, bathing synthetic drums in warm organs and surfy guitars, and the band’s signature sky-high harmonies.  Heavy Feet marries hand claps and sparse chords with a driving snare and one of the most remarkable choruses on the album, while Ceilings sounds like Fleetwood Mac with a dub bass groove. Colombia, written for a member’s mother who passed away unexpectedly last year, is the album’s swollen heart moment, a love letter from a son to a parent which grows in beautiful, orchestral complexity around a simple, plaintive chorus. Like all of Hummingbird, the song carries with it not just a melodic richness, but a quality of catharsis and grace – a moment to be examined and ultimately enjoyed.