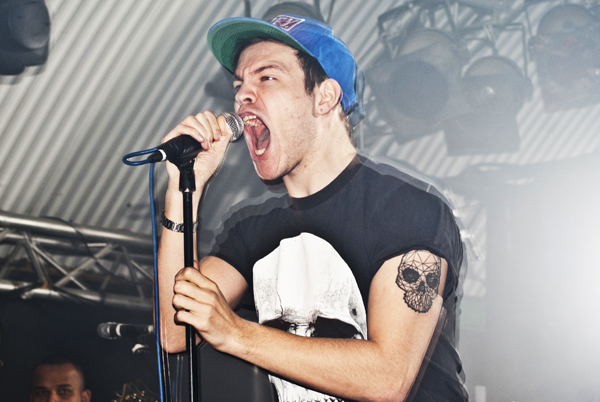 When I first heard Hadouken!, I was 16. I wore far too much neon and I still took everything NME said as gospel. There was only one place I trusted more than NME when it came to music, and that place was Myspace.

Since the band hail from my home town of Leeds it wasn’t long after their first few gigs that there were bulletins all over the place telling me to listen to them “and OMG get one of their t-shirts, you totally have to colour them in yourself LOL”. The first time I went to one of their gigs it was cancelled before half the crowd had even turned up because the venue was too small. All this, and the phrase “New Rave” hadn’t even been muttered yet. They were the very definition of a Myspace band.

But even then, in the midst of my Hadouken! obsession, I would never have believed you if you’d told me that, seven years later, I’d be stood here in a room full of sweaty, excitable teenagers watching them play a sold out gig at The Cockpit. In that respect they’ve surprised everyone, but thanks to constant re-invention it seems they’re still going strong. “We wanted to shun the ‘New Rave’ label from day one”. It wasn’t about what the music press thought it seems, “what matters is what the fans think of us, and they seem pretty happy” frontman James Smith tells me before the gig.

It’s probably this attitude that has kept the band going for so long. Whilst they may not adorn the front pages of music magazines any more, somehow Hadouken! are still a pretty big deal. One of those underground bands that always seem to be on the verge of something huge. 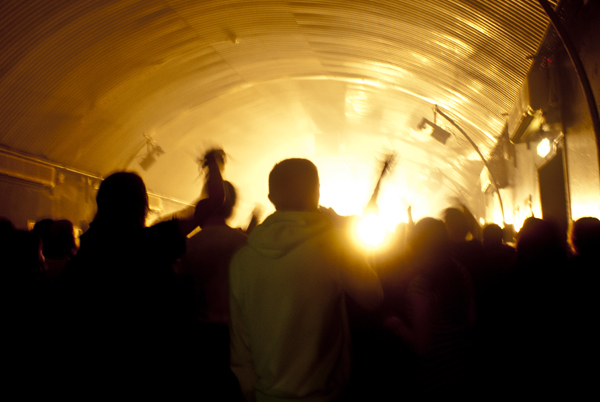 From the word “go”, James looks as if he’s on a mission tonight, hell bent on getting the most out of the crowd. The energy in the room is infectious from both the crowd and the band as we roar through 3 albums worth of would-be-hits. Within ten minutes it’s evident that the fans are more than just “Pretty Happy” with the songs from new album “Every Weekend”. Songs which wouldn’t be out of place in a huge Ibiza nightclub.

Something has changed since the last time I saw them, they’ve evolved both lyrically and as a live act. They suddenly seem to be taking themselves much more seriously as a band. Hadouken! Have definitely upped their game, but lucky for me, they’ve kept all the elements that made me fall in love with them all those years ago. Tonight feels like it could be the last chance I get to see them in such an intimate venue because this is music that is made to be played to the masses. That’s where it would work best and whilst it might not be to everyone’s taste it does what it says on the tin. It’s music for the weekend and it’ll go down a treat at this year’s festivals but whether all the hard work pays off and helps them finally cross over into the mainstream remains to be seen.

Watch the video for Levitate: