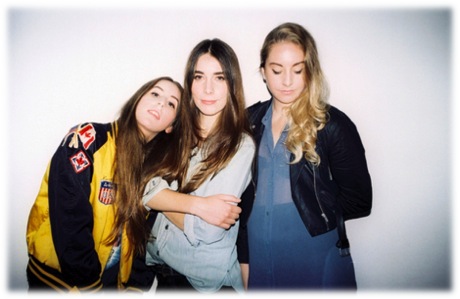 “Yeah I’d kick some ass if anyone messed with my sisters.” – Este, Danielle, Alana; HAIM.

Fair, free-flowing and inexcusably passionate. These LA based ladies are breaking cool-barriers whilst consistently growing home-brewed sounds of lyrical loveliness time in and time out.

A bond from birth the Haim sisters are an amalgamation of ‘folk-friendly pop’ with a twist of ‘rhythmic R&B’. Whilst growing up on a musical diet of Motown myths and Beatle classics their fame and fate was sure set in the stars.

Ten years prior to this the Rockinghaims took on the town, Mrs on vocals, Mr on drums, sisters on percussion, happily building a family fort of classic rock pop. However little did they know that this was the start of a ‘Haim’ empire of unfathomable grade A talent.

Now all grown up, music flowing in the veins, the offspring of hungry Haim’s flew the nest, prepped and ready to effortlessly boast a budding blend of ‘80’s synth rock’ laced with ‘folk flavour.’ Touring alongside some of the greats, such as ‘Florence and the Machine, Mumford and Sons,’ the siblings grace the stage with a unique performance, wowing the crowd with feel good vibes.

Heavily influenced by R&B pop the girls collaborate a whirlwind of instrumental music whilst writing lyrics of life, love, heartbreak and all matters of emotion that connect us. Their organic movement bears a similar resemblance to Fleetwood Mac trending that cool, quirky appeal so currently sort after. Hitting headlines with EP ‘Don’t Save Me’ and ‘Forever’ the girl’s tour on ripping through the heart of the music industry, already venturing in to the UK sound system, bagging that top spot ‘BBC’s Sound of 2013’.

Attracting a frenzy of global gratification for outstanding sound and performance, Este, Danielle and Alana now pave a new musical wave for other artists to sit up and follow. Currently flowing on with future fusions of folk-pop these sisters are proving that an unbeatable bond can only stem from the root of families, as they serge on into the unknown holding each other whilst tackling life’s trials and tribulations.