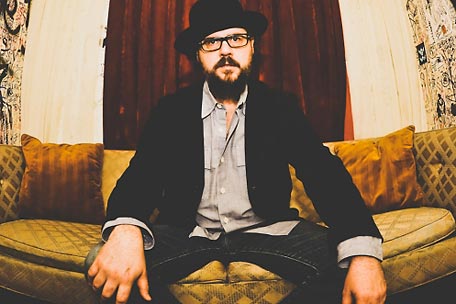 On Tuesday, 13th November, Drive-By Truckers co-founder Patterson Hood took to the stage The Union Chapel in Islington, appearing alongside Craig Finn (The Hold Steady) and Will Johnson (Centro-matic, Monsters Of Folk).

What follows is a truly spellbinding show. Although set amongst the pews of a vast, still-functioning church, the performance itself couldn’t be more intimate. Whilst the three modern-day troubadours trade stories, songs and more than a few beers, any observer would have thought themselves in a cosy local music bar or even their own front room.

No one takes centre stage, instead taking it in turns to play their own material and that of their influences, while the other two sit back with a palpable air of artistic appreciation, occasionally offering a little vocal or guitar accompaniment. An extended standing ovation precedes the encore, capped off with all three playing a storming rendition of R.E.M.’s “Don’t Go Back To Rockville”, with the chorus refrain supplied by a now noticeably worse for wear Craig Finn. All in all, it is a fantastic show, and a fine display of storytelling, humour and musicianship.

Following the performance, Patterson was kind enough to answer a few questions on the show, his recent album, and what’s important in a good Tequila:

Hi Patterson, thanks for taking the time to speak to me. How are you?

Patterson Hood: Good. Starting to decompress and rest up from tour. Glad to be back home with my family.

It was a sensational show you guys played, and the format was not quite anything I’ve seen before. Where did the concept for the show come from?

PH: They have a lot of shows in this format in Nashville, some call it roundhouse style or songwriter showcase, guitar pulls, etc. This show originated from a lunch I had with Craig Finn shortly after the release of his excellent album (Clear Heart Full Eyes). He was in Athens for the afternoon and we had lunch at The Grit and came up with the idea of hoeing this in Europe and UK. Will was a logical third person, as he played on both of our albums, had his own coming out this fall and is a great friend of both of us.

I thought bringing your own drinks onto the stage was a really nice touch, although me and my mate got into a debate at one point. What was that suspicious-looking bottle you guys were passing round?

PH: Some kind of Tequila. Can’t remember the brand , but it was pure agave, which is important to tequila drinkers. I think we about did that one in.

During the show, you expressed you’re admiration for many musicians, with some of the more recent artists being the likes of Alabama Shakes and former Drive-By Truckers bandmate Jason Isbell. Who else are you into at the moment?

PH: Father John Misty has my favorite album of the year (Fear Fun). Also digging Bill Fay’s excellent album Life Is People and listening to Elephant Micah’s album Louder Than Thou. Of course Will’s (Scorpion) and Craig’s albums are supercool.

Is there any chance of you, Craig and Will putting anything to record in future?

PH: Don’t know if that will happen anytime soon, but you never know. Will and I have talked a lot about making a full album together at some point, but we all have a lot on our plates.

I’d like to talk a bit about your new album, Heat Lightning Rumbles In The Distance. What inspired you to produce a solo album at this time?

PH: As is so often the case with me, the songs kind of called for it and I just follow the songs. So much of my career trajectory has been a matter of following the songs. That is the motto in DBT and in my life, “Song Is King”. Everything else is secondary, although I have put a whole lot more care into the musical side of things in the past four or five years.

I had all of these songs and DBT was going to be taking most of the year off so it called out to be a solo album. It needed to be that anyway, as it’s a very personal collection and I didn’t really want a lot of outside input this time, which is odd for me. I am very happy with how it all turned out.

While other artists may choose to take a step back from their band projects when it comes to recording a solo record, nearly all your Drive-By Truckers bandmates appear on the album. Is there any particular reason for this?

PH: I really love the way those guys play and that’s what I heard in my head as I was putting it all together. I wanted to use them in ways they might not go to in a DBT release, like I love [Mike] Cooley’s banjo playing. Plus I didn’t really want a lot of guitar on this. I’m very happy with how it turned out.

I’ve always been struck by the deeply personal approach you take to songwriting, often writing in the first person. Would you say this is because you personally feel affected by the topics you write about, or more that you feel imagining yourself in other’s shoes better reflects your observations of the world around you?

PH: I often write in the first person. I guess I just like telling stories that way. Being in the shoes of one character or another. In the case of this album, the character is closer to me than usual. Sometimes I might write from a point of view that I don’t agree with at all, but always try to sere the character correctly, whether I agree with him/her or not.

Your past, and in particular the area in which you were raised, features heavily in your music [particularly the Muscle Shoals region of northern Alabama]. Why do you think this had such a significant impact on your writing?

PH: I guess you write what you know. It is a very profoundly weird and interesting place with a wild history that I find endlessly fascinating.

One line that particularly struck me was the line from “(untold pretties)”: “As far as I’m concerned it was the last time I ever saw her”. Tell me about that

PH: I guess that way of putting it does put a bit of a spin on it rather than saying I never saw her again. Probably best to leave it ambiguous since that’s how I wrote it.

From your songs and live performances, it’s clear you have a certain talent for storytelling. Is this your intention when approaching songwriting?

PH: I never really preconceive how a song is going to be, I just write it and let the song lead itself. I sort all of that out later. I am very interested in writing a book or a screenplay at some point. Some of the songs on this album began as part of a book I was writing on, but it morphed into something else entirely.

And finally, what have you got installed next?

PH: Hopefully another DBT album at some point, maybe a book. Might make an EP with the band I put together to tour behind this album in the USA. I’d like to do some producing of other artists and I still want to make a movie someday.