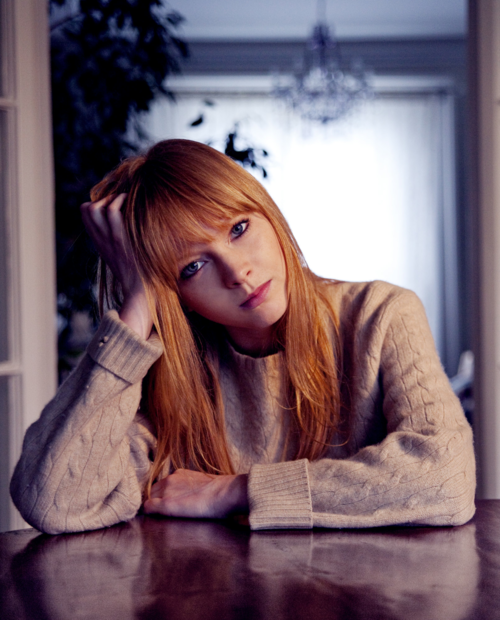 Lucy Rose is the singer-songwriter that has shot to fame following on from signing to Columbia Records, being tipped as one of Vogue’s “Indie Music Breakout Stars” and featuring on Bombay Bicycle Club’s albums, ‘Flaws’ and ‘A Different Kind Of Fix’.

This year has been magnificent for the young starlet, as she completed album-writing, a month long début headline tour, string of festival performances and the release of the much-anticipated record, ‘Like I Used To’. The record went on to peak at #13 in the UK Album Chart and this stead the singer into a strong position to continue her domination across the rest of the year and 2013.

Fortitude Magazine caught up with Lucy Rose prior to a performance at Bestival, prior to her album release, and this is what she had to say:

We’re backstage at Bestival, how are you today?

Do you mind explaining to our readers, what inspired you to become a singer-songwriter?

Erm, I don’t think it was a moment or a particular time, I think it was a gradual progression. I really enjoyed music at school and I enjoyed playing, particularly, to start with the orchestras and wood bands. All different things like that; I enjoyed being a part of.

I liked performing alongside other musicians and it brought me a lot of happiness. It was only until I learned to play guitar, which I taught myself, when I started writing little things.

It was at that point, I was like 16, I thought that I should do some open-mics or something and travel down to London. So, that’s what I did and it was a gradual progression to where I am now.

In reflection to your sound, do you list any particular artists as your influences?

I had absolutely terrible taste in music, so probably not. It’s only recently, the last 5 years or something, that I started to discover Neil Young, Carol King, The Rolling Stones, etc. I didn’t really know these bands existed until I was too old.

I find discovering all of those have definitely helped influence me. When I was growing up, you could only hear like the “poppy” stuff on Radio 1 and I was never sure that my music would ever fit into this world.

So, by the sounds of it, it wasn’t the usual parent-influenced sound at all then …

It was only really when someone introduced me to acoustic music, which is not acoustic music – so I don’t know why we say that. It’s from then that I really discovered music and listening to some of Neil Young’s records that were so raw, it made me go into a direction that I knew I wanted to sound.

Many may argue that your feature on Bombay Bicycle Club’s album ‘Flaws’ was a key aspect to your breakthrough, is that a statement you’d agree with or do you think there were other elements involved?

Who knows what it was. It was something I did. They are friends of mine and they asked me to sing on their album, and at this point I had been doing my music for 2-3 years when they asked me to do this.

I think this may have been an element when a lot of people first heard me, because of my feature, but I know that people have heard of me because of a magazine piece or a song that played on the radio. Everyone has their own reason for how they found me. At the moment, a lot of people probably had only discovered me because of Bombay [Bicycle Club]. But, I’m hoping in the future that audiences will find me through other aspects and it will even itself all out.

Earlier this year, you completed your first headline tour, how was that experience?

It was a month long tour, so it was long and gruelling. But, as soon as we finished, I met with my booking agent like “we must do another month in October”. I feel the most important thing is to see fans coming to watch a band improve and supporting them, it is what I enjoy most. I love performing live and it’s where I feel most comfortable.

We’ve always wondered; what your feelings must be like hearing a venue singing your songs back to you?

It’s crazy. We did Reading & Leeds Festival and we started with ‘Middle Of The Bed’ and it felt like the whole tent was singing along with us. I hadn’t even released my album yet! That was so surreal, it was ridiculous. But, it is moments like that when I realise we’re going in the right direction, when everything else feels like it isn’t.

As it’s such a hard industry, it’s so competitive. Most of the time you feel down, but the moments when the crowd are singing back to you are the moments when you sometimes believe in yourself for the first time.

You also embarked on the Africa Express tour, which consisted of so many wonderful collaborations on that journey, what was it like touring alongside those musicians?

It was totally insane. I was on a train with John Paul Jones of Led Zeppelin, Carl Barat (The Libertines/Eyes On Film), David Albarn (Blur/Gorillaz) and including that Baaba Maal and all these other African musicians that were so inspiring. It was such a great experience.

Festivals are often a place for musicians to attract new fans, so are you nervous to seeing how well your album is going to be perceived?

I’m really nervous. We done the tour, we’ve done a lot of festivals and we release the album. I’m extremely nervous, as we’ve worked so hard this year and it’s all leading up to this.

Some musicians are notable for their pre-stage rituals, are you one of those musicians who does anything like this?

I sing a single part of a song, which is like a 3-part harmony, along with the band. We just go round and round until we go on.

If people have missed you out on your recent tour, what are they missing out on by not seeing you live?

I don’t know. I think it’s a bigger sound. It is with a band. I know that a lot of the songs will illustrate that I am just a singer-songwriter, but I know that there is a fuller sound when live. My band is brilliant. I think we just play well together.

Our final question; if you had the opportunity to collaborate with anyone, who would it be and why?

I don’t know yet .I feel that I could only collaborate with someone if they liked my music as well. So it’s hard to choose someone thinking that they would like it. At the moment, I’m up for collaborating with anyone that would be willing to approach me really.

Check out Lucy Rose’s ‘Bikes’ (taken off ‘Like I Used To’) below: