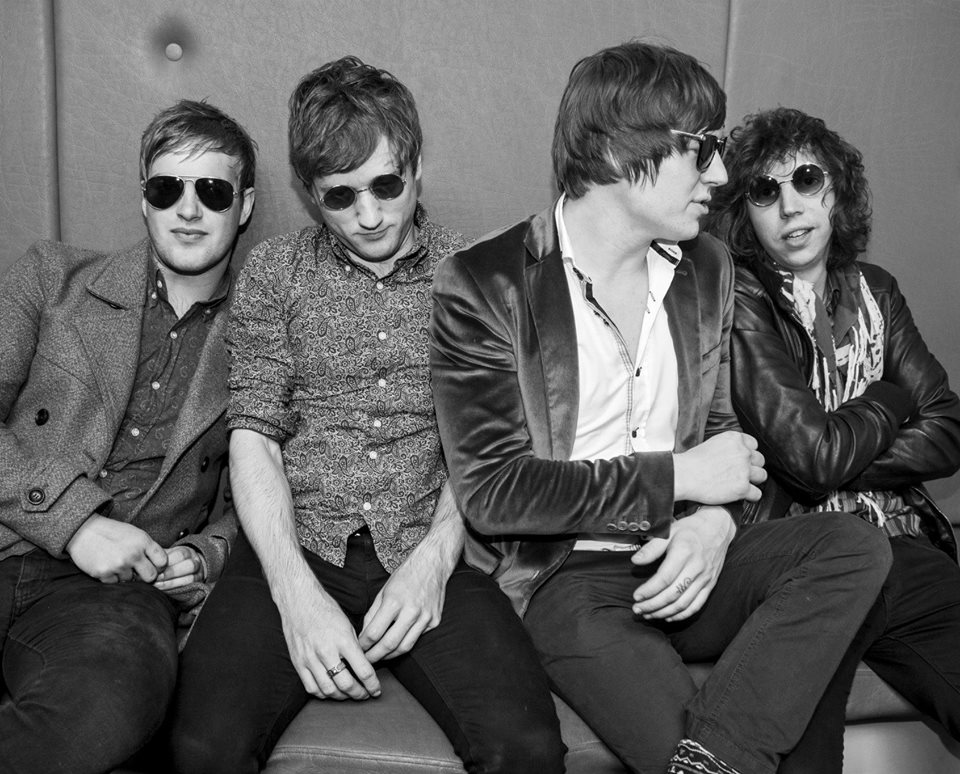 British indie rock’n’roll may be suffering in the mainstream chart lists, but as many of you will know, there’s a whole collection of promising younger acts coming through.
Midlands-quartet House Of Thieves are definitely a band with a rosy future. We caught up with guitarist Tim after their energetic set at Y Not Festival.

Your first gig was two years ago at The Venue in Derby. What are your memories of that night?

Lot of nerves! Obviously ’cause it was our very first gig and we didn’t know what was going to happen. But we knew we were onto something good what with the crowd reaction.

So from there you’re now playing alongside the likes of British Sea Power on big festival stages within the space of two years which is fantastic. How has the journey been?

Lots of quarrels along the way. Been good though! The tour with Mystery Jets early on was amazing. And we did a show with Darlia in the year and they ended up playing on the Quarry stage with us at Y Not Festival. Just want to get us out there and let people know who we are. It’s difficult without the financial backing.

If you could put your finger on what has been the single most important moment for the band so far, what would it be?

Most important thing is just getting together and writing. Being best mates really helps us. But yeah, playing all the big festivals is important too.

You’ve been supported a good deal by BBC Introducing and Soundhub, two credible organisations in the midlands. Does this backing give you the confidence to be ambitious as a band?

Definitely, definitely. Especially doing the interview with BBC Introducing’s Dean Jackson after Y Not Festival. He’s really into us which means a lot. And the studio space Sound Hub has given us is really useful.

I watched the Y Not Gig which was fantastic, a real energy came through. You’ve played Y Not Festival for a few years now, what does it mean to you guys to play there?

First year we were buzzing, ’cause it was the first festival we played at. We played low down on the Allotment Stage that year. Then when we got asked to come back second year higher up on the Allotment stage we were well happy. Now we’re on the quarry stage this year and hopefully we can return next year.

And looking back at all your festivals and gigs this year, do you have any funny stories?

We all like a good drink after a show. Yeah we like to get merry. Coming back from Kendal Calling festival we chucked the singers shorts out the window and he only found out yesterday! Also got told off by security at Kendal Calling for tying the singer to the back of our car and driving around the campsite.

The indie rock scene in the Midlands is really healthy at the moment. Are there any particular bands you’re into?
Yeah there’s a few we’re into. The Struts, Three Girl Rhumba, Red Faces and Knaves.

We’ve heard there’s an EP on the way in September. How is that going? Does it have a title yet?
Doesn’t have a title yet. Meant to be September but I’m not sure. I hate calling it an EP though, sounds a bit pretentious.

With the length of time it’s been from your very first show to your first EP, and with your fan base growing have you felt pressure to release any music before now?
All the time. Got to wait until it’s ready. And also, our local following is good. But we want to grow our following nationally so people are interested. Rather do that than put dribs and drabs out on the Internet. They say it’s easier to make a band name for yourself.

It’s been said that a romanticised view of life comes through in your early music. Is that more down to being passionate about that type of storytelling and being influenced by the likes of the kings of romanticism, The Libertines, or is that actually who are as people?

Bit of both really. I’m very political which I won’t get into. There’s all sorts of stuff. For me songs have to have meaning. When you’re not writing heavy guitar rock riffs, you have to have good lyrics.

Will that carry onto the new EP, or will we see a more gritty and realistic story come through?
Still a mix of both really. Got to glorify being skint somehow!

Plans for the next year or so?
Get out gigging. Secure good support slots. Talking to a few people at the minute which is great. Will also look to grow the relationship with Dean Jackson (BBC Introducing) and others.

Watch the official video for Do When You Don’t by House Of Thieves, here.