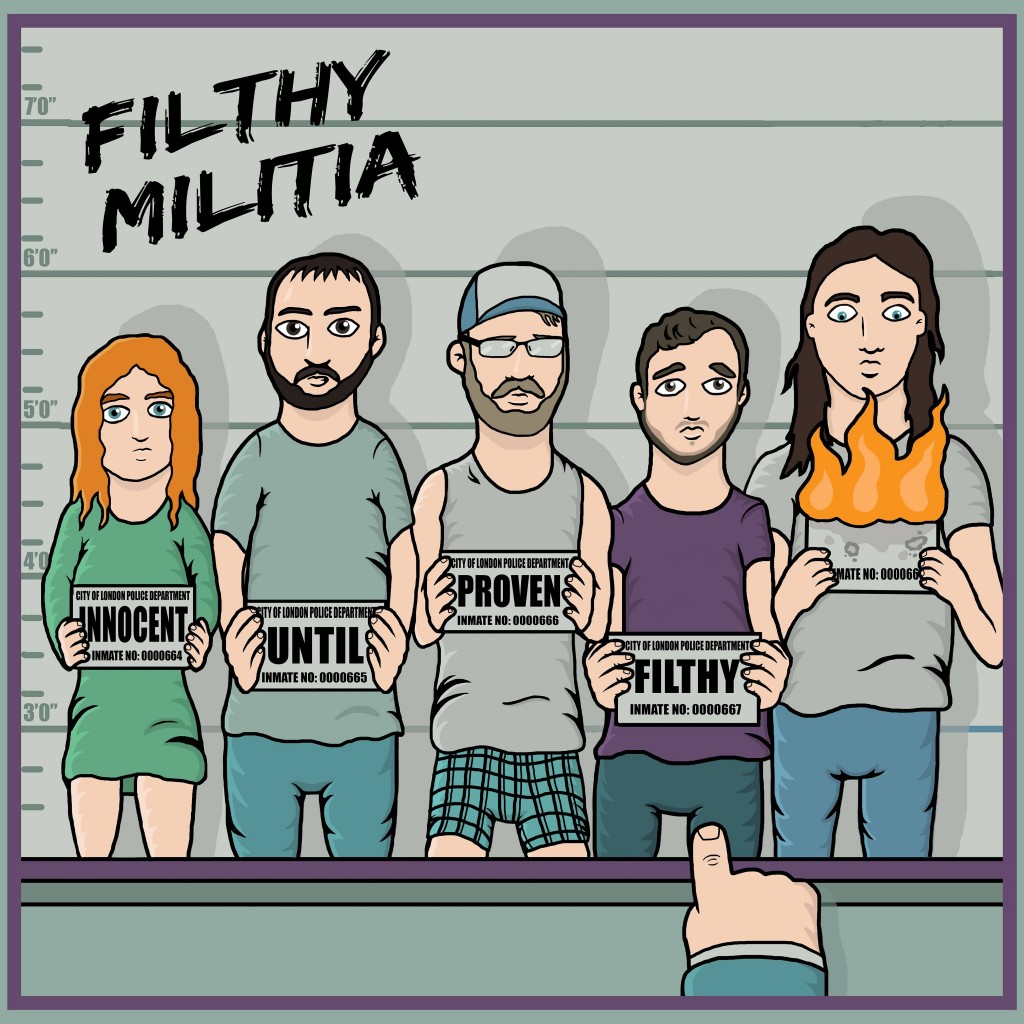 If you want to enjoy life instead of letting it batter you, stick this on and forget our appalling existence for a while.

Formed in ‘the clusterfuck of 2016’ according to their Facebook page, Filthy Militia are a 5-piece outfit inspired by the likes of the Mighty Mighty Bosstones, Less Than Jake and a whole lot of Madness. Nothing wrong with that, as long as you’re going to go for it, and I’m happy to report they have.

When I finally got a chance to stick this on and the parping started, my heart sank. Ska – arch nemesis of intelligence, eradicator of human dignity. This better be bloody good, I thought, or at least make me want to dance like a twat. Four tracks of upstrokes and saxophone later, and I’m fantastically irritated by it, but not for the reasons you might think.

This is definitely music for drinking and arsing about to. Opener Up In Smoke is a clarion call for everyone in earshot to widen their trousers and aim their faces at the floor. As soon as the vocals kick in I’m strangely drawn in; there’s some pretty hefty reaches on here, which singer Frosty reaches surprisingly easily given the nature of his delivery, but this is symptomatic of the entire record.

The horns are smoothly deployed, and there are checks all over my party-ska bingo card, but the mix is all uneven, with the guitars coming from another room, the drums too quiet and the vocals bone dry. The lyrics are terrible, but that’s not important. Let me explain.

I’ve always hated ska because I couldn’t stand how moronic it was. This is my problem, not the music’s, and I wasn’t going to let it have a negative impact on this review because that would be churlish and unfair. Here’s the rub; I was cleaning the shower while listening to this, and halfway through Storm Warning the music got so choppy and fun that I saw myself smiling uncontrollably in the mirror. It all happened so fast – I was moving like I haven’t moved in a very long time, my now-robotic limbs marching rigidly to the upbeat rhythm. I was dancing and grinning at the same time.

I could still hear the unevenness in the sounds, the studied delivery, the borderline keyboard bass, but this was a mass greater than the sum of its parts. I was having a Good Time. By the opening bars of Little Sister I was fighting the alien urge to listen to Innocent Until Proven Filthy Innocent a second time, yet there I was, dancing like a twat. This wasn’t the lame man standing up – it was a bloke with no legs running a marathon, a true sonic miracle.

Despite everything being stacked against it from the cover art down, I loved this. If you want to enjoy life instead of letting it batter you, stick this on and forget our appalling existence for a while. Well done, well done everybody.