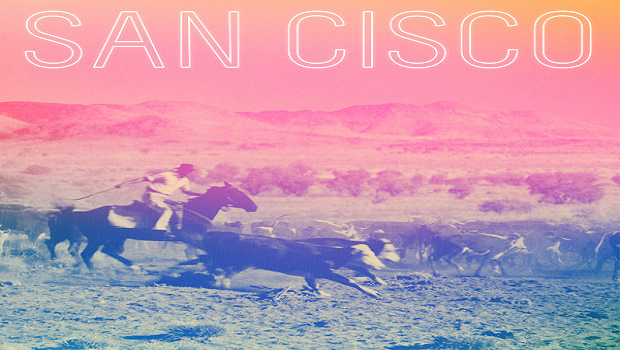 Formed in 2009 under the original name of King George in Fremantle, Australia, San Cisco have gained interest across the world, winning awards such as Best New Single at Western Australia’s WAMI awards, and also being featured on the new music Radar in NME…

The band have released two EPs, ‘Awkward’ and ‘Beach’, before signing to Fat Possum Records to record and release their self titled, debut album. The LP features the group’s blissful, indie pop sound throughout, but in all honesty, not really much else.

The album launches with summery single ‘Beach‘, with its pulsing, sparkling synths and melodic vocals from Jordi Davieson throughout the verses, giving the track a dreamy quality. However, drummer Scarlett Steven’s childlike singing for the chorus almost cheapens what would otherwise be a great opening track. Second track ‘Fred Astaire’ dances along with jangly indie guitars and a catchy chorus which will have you moving like Mr. Astaire himself. The promising start continues into ‘Awkward‘, another single taken from the previous EP of the same name, and slow ballad ‘Hunter‘, which is a nice contrast to the opening three tracks. The former is reminiscent of indie artists such as Darwin Deez, and complete with a “Da Da Da” chorus, will surely be coming to a Topman playlist near you soon.

San Cisco’s indie pop sound is enjoyable, but in small doses. The jangly guitars, and dreamy synths complement Davieson’s vocals well, but grow tiresome as the album goes on, and trails off after the first four tracks. Metaphors is a slight peak in the downward spiral, with the frontman sounding particularly like Ezra Koenig of Vampire Weekend.

Sadly, the second half of the self titled LP is completely unmemorable, with no stand out tracks at all. ‘Rocket Ship’ is a cheesy attempt at a festival singalong anthem, with hand claps and ooh la la’s galore, thrown in in an attempt probably to cover up the fact that they couldn’t think of any lyrics to go there. Penultimate song ‘Nepal’, with its space synths and crescendo ending is a slight saving grace, and should perhaps have been the album closer, as instrumental’Outro feels completely out of place and unnecessary, and sounds more suited to a 90s Nintendo game soundtrack.

San Cisco show some promise, as the singles from the album are enjoyable. However, the Aussie four piece need time to expand their sound, from their currently one dimensional indie pop style. They can clearly write a good single, but should take more time to channel their influences into a more complete album.