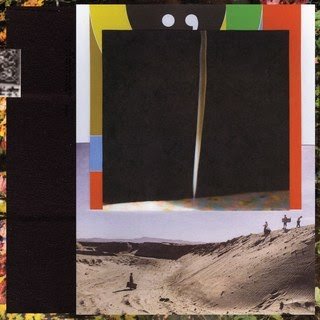 I,I sees Bon Iver return with an album that is welcomingly familiar, combining the risks they laid out on 2016’s 22, A Million with the folk melancholy found on their self-titled release, resulting in another immersive, though inconsistently satisfying listening experience.

I,I sees the return of Justin Vernon and co, the first release under the Bon Iver name in three years since 2016’s divisive foray into glitchy folktronica 22, A Million.

This, their fourth album, sees a conclusive seasonal shift in tone, which begun with the isolated winter of their stunning 2007 debut For Emma, Forever Ago, leaving I,I as their self-described autumnal record.

Whilst “Yi” might be the first track on the album, it is more of a strange thirty second prelude to the first proper track “iMi”. Finding the band on familiar territory, Vernon’s vocoder infused vocals lead the way for the first half before breaking off with pulsing synths, sweet acoustic guitars and horns arriving in droves towards the back end.

It sets up a lot of what makes I,I an overall success, Bon Iver have managed to bring together previously tested elements of previous material and finesse them together, “Hey, Ma” exemplifying this best, individually it’s components wouldn’t have sounded out of place on any previous record. It sparks the most successful run of the album, it is an achingly beautiful song, courtesy of its dreamlike evocation of youth and retrospection through Vernon’s sensitive falsetto; it’s arguably one of the strongest songs in the Bon Iver repertoire.

Voices have always been a defining character for Bon Iver and they have a strong part in propelling I,I to its peaks, particularly the vocal cracks which appear during the subdued “Marion”, as the angelic choir on “Faith” and during the cathartic finale of “Naeem” where Vernon’s pained yelp collides with a fireworks display of glitching keys, brassy horns and galloping drums.

Where I,I falters is not in its components but in its construction, often songs fizzle out instead of finishing with the promise built up, failing to scratch the final itch. Though listening to the album in full eases this and through repeated listens the more colourful and moving instrumentation comes to the forefront, and I,I features some outstanding musical textures such as Mike Lewis’s supreme sax solo at the end of “Sh’Dia”, the modern gospel piano of “U (Man Like)”, the tense violin which darkens the final third of “Holyfields,” and “We” which features the closest thing to a trap beat in the Bon Iver catalogue.

Vernon’s words often stray away from solid definitions, challenging and evocative though with a varying success rate, however on the aforementioned “Holyfields,” he speaks “I’m as happy as I’ve ever been” which feels like a broad statement on much of the headspace in which I,I was created. Out of the woods of For Emma, Forever Ago, past the spring of the bands self-titled LP and emerging relatively unscathed from the dizzying summer of 22, A Million, Vernon and his collective find themselves reflective though hopeful with their place in this; their autumn.