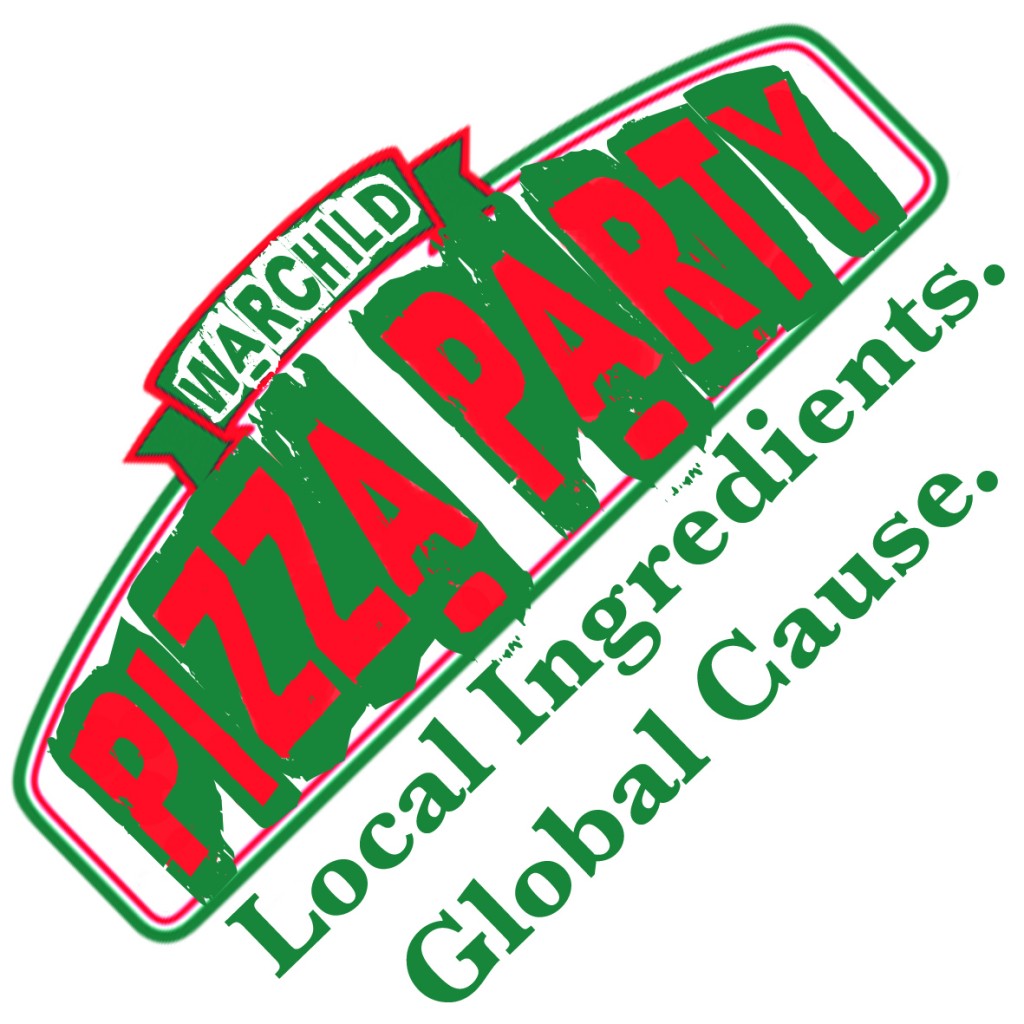 Before we lift the lid on this sensational compilation, for which we have the honour of having the very first glance, some context is certainly needed as there is more history contained on this one disc than the casual observer may realise.

Beginning on 24th June 2016 at The Fighting Cocks, Kingston-Upon-Thames, the Rock N Roll Pizza Party has become a semi-regular event that serves many purposes: to support live music, to celebrate the frankly staggering number of bands that hail from the Kingston area, and most importantly to raise money for a very worthy cause. The brainchild of Resh Al-Nakeeb, front man of pop punkers And Now We’re Even (although the contributions of his bandmates are not to be overlooked), the night follows a simple yet effective formula: get all your mates’ bands together, give out hundreds of pounds-worth of free pizza, organise a raffle with awesome prizes, make it free entry and donate all the profits to War Child, helping children all over the world caught up in the worst possible conditions imaginable. You will find few events in and around London with such a sense of camaraderie, and the effort put in by everyone involved is truly inspirational. There are no rockstar prima donna antics or petty squabbles over pay, just a group of friends enjoying what they do, having fun and doing a little charity work while they’re at it.

With Pizza Party No. 4 fast approaching, ANWE had to step up their game. They managed to do so in the best way possible with ‘Pizza Party: The First Slice’, a compilation of every single Pizza Party artist so far. Even from the get go the presentation is impressive, as each album comes housed in a miniature pizza box (grease stains and all) that has been handmade and hand-numbered by And Now We’re Even. There are only 100 of these currently in existence, all of which will be made available for £5 a pop at Pizza Party No. 4, and every penny will go to War Child. But as we all know, it’s not the packaging but the ingredients that counts, so the real question is are we in for Papa John’s or Chicago Town? 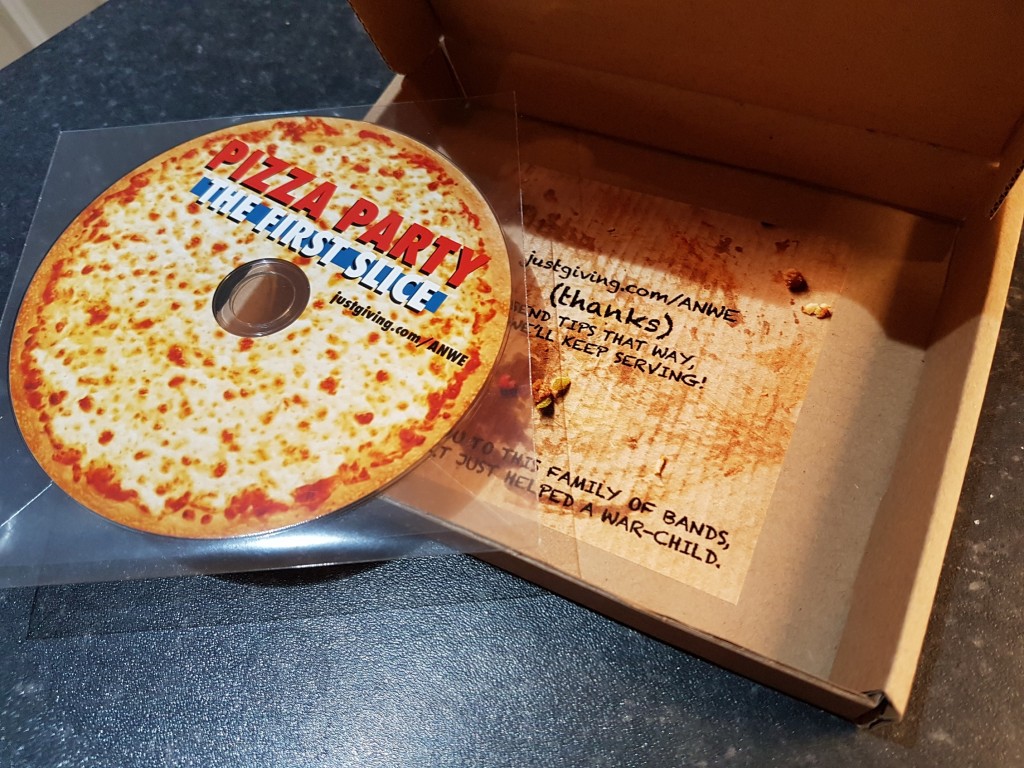 A first look at what’s under the lid

The tracklisting is somewhat different to what you may expect from compilations of this ilk in that rather than being completely mixed up, giving an overall impression of the scene but losing some of the individuality of the bands in the process, each artist is given two subsequent songs to convey their sound. This proves an effective strategy, truly showcasing the surprising array of styles that orbit this relatively small Kingston venue. The album begins with the hosts and one of two new songs featured on the CD, ‘Keep It Real’, due to be included on And Now We’re Even’s upcoming album and available here as an exclusive preview. This in excellent starting point, as it’s basically a condensed version of the entire set. A pop punk anthem laden with irresistible hooks and positive energy, members of Darko, The Lagan, Beyond Reasonable Doubt, Resuscitators, The Wonder Beers and Filthy Militia all contribute to the song’s gang vocals. It’s a community effort like no other and the work put in by And Now We’re Even is really commendable, spawning no less than a four part documentary about the songs recording process and the bands involved.

From then on, it’s a true smorgasbord of musical delights, and there will be something for everyone no matter where they sit on the punk rock spectrum. Following And Now We’re Even is the beer-weathered celtic punk of The Lagan, spinning tails of drunken brawls and regret, followed swiftly by the furious hardcore punk of Darko, blasting out from all quarters with vocalist Dan Smith giving it both barrels with uncompromising intensity. Next up is the feelgood and oftentimes hilarious lad-punk three piece The Wonder Beers, producing a sound that falls somewhere between early Clash and Ian Dury through songs about your terrible actions the night before and the even worse repercussions the morning after. The pace is once again boosted up a notch with a duo from Resuscitators, kicking out the sort skate punk jams and bellow-along choruses that’ll find their way into all of our hearts one way or another. 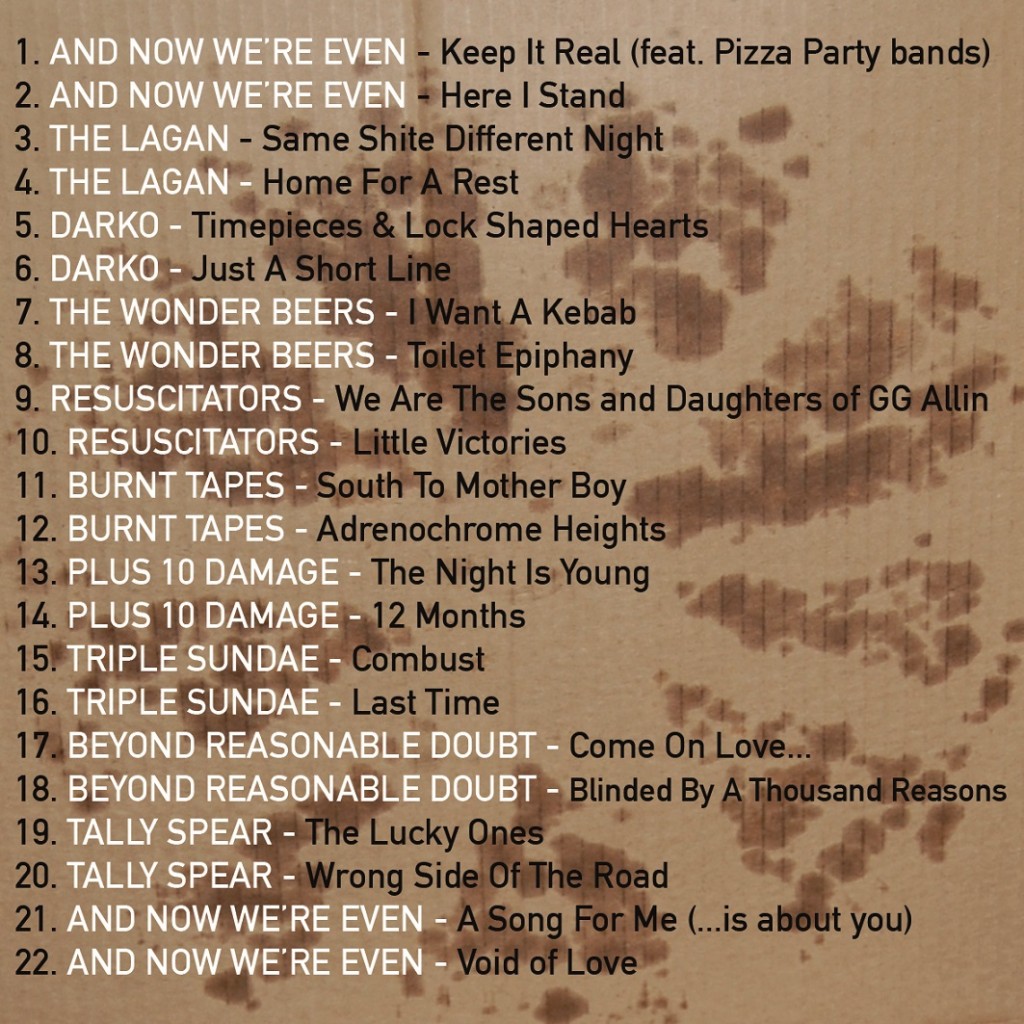 The next three acts all follow a similar vein while still each adding their own unique flavour. This include the epic raw emotion of The Burnt Tapes and the more down to earth yet equally captivating style of Plus 10 Damage. Triple Sundae mix it up once again with the addition of a horn section, adding a welcome ska punk edge to proceedings. They are followed by the now sadly-departed Beyond Reasonable Doubt, local legends who famously reunited for a one off performance at the very first Rock N Roll Pizza Party. However, their influence is never too far away, with the band has been at least partially resurrected in the form of cover duo and Pizza Party house band Cheats, and with a new project in the works, it’d be wise to keep an ear out in the South West London area. Folk pop singer-songwriter Tally Spear is the greatest musical departure on the album, but having opened the first Pizza Party, her place is rightly deserved. Her beautiful vocal style and no-frills backing are a joy to behold, particularly on her latest single ‘Wrong Side Of The Road’. And in perfect fashion, And Now We’re Even round off proceedings with two numbers from their latest album ‘Hygge’: ‘A Song For Me (…Is About You)’ and the tender acoustic closer ‘Void Of Love’.

There’s something quite special about ‘Pizza Party: The First Slice’. This is no haphazardly-assembled disc. It is the combined efforts of years of hard work, good times, and shared experiences between a group of friends on a local scene, and this album is a well-earned celebration of that fact. Though life may have taken these people on separate paths, the music still brings them together, and anyone would be hard-pressed to find such a strong and dedicated punk rock scene anywhere nationwide. The very essence of the Rock N Roll Pizza Party is contained on this one disc, and may this event continue to produce great bands and nurture the local music scene for years to come.

‘Pizza Party: The First Slice’ will be released at Pizza Party No. 4 at The Fighting Cocks, Kingston on Friday 12th May, in a limited run of 100 copies at £5 each. They will only be available at this and future events, and 100% of the money received will be donated to War Child.