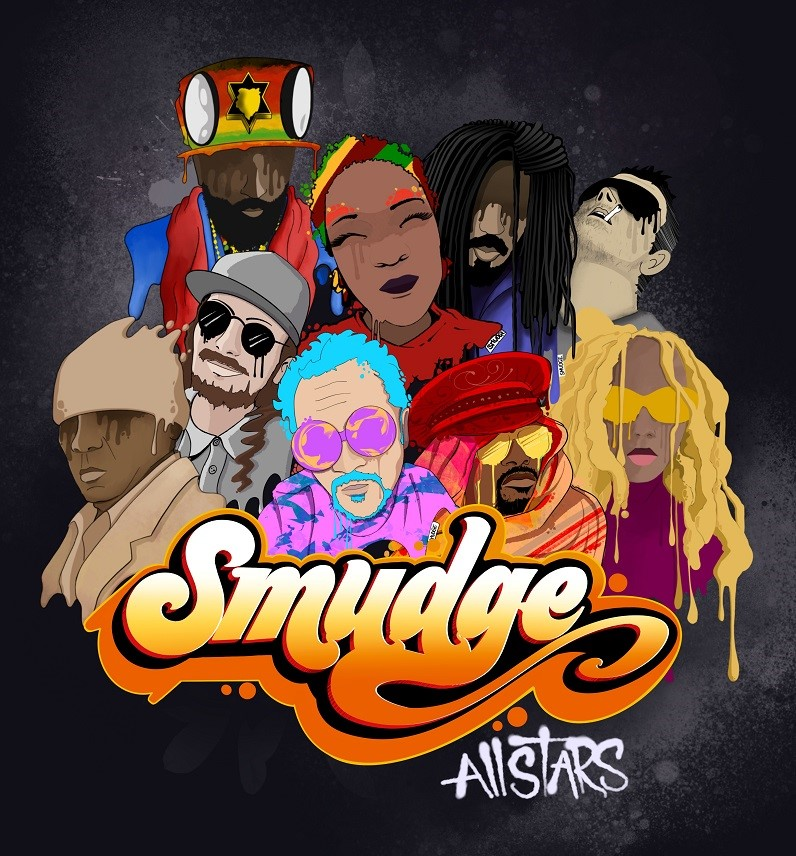 Funk collective Smudge All Stars have just released their debut self-titled album which was eight years in the making. Smudge All Stars was formed by Richie Stevens, drummer, percussionist, producer and the son of British free jazz pioneer John Stevens. The funk collective is made up of a wealth of musical stars such as Lee ‘Scratch’ Perry, George Clinton, Alfred ‘Pee Wee’ Ellis, Fred Wesley and James Gardiner-Bateman.

The album opens with second single Brutal Funk which begins with strums in the style of the lute, a surprising but delicate introduction which is then swept away by the funky beat and electronic accompaniments. The contrast between the traditional and the modern melodies is a playful touch and I like the layering of groovy guitar plucks with heavy beats and scratching vinyl. As the track progresses the funky elements grow to form an infusion of R’n’B, hip hop and funk. The grooviness intensifies as the velvety vocals from British soul singer Mary Pearce kick in, aided by some soulful harmonies. Jamiroquai’s DJ D-Zire also features on the track, lending a hand with the beats and adding his signature flair to the groove. The track is funky through and through, delving into the story of funk itself with lines such as “everybody wants to know, what’s the story of the funk. Here’s what we got told, a very long time ago…” The chorus of “I wanna funk with you, wanna funk the way you do” has an almost sensual edge when sung in Mary Pearce’s soulful style.

Next, we’re thrown straight into Up Is Just A Place which features vocals from George Clinton. Electronic elements are combined with the funky guitar strums, resulting in an achingly cool vibe. Clinton’s urban-style vocal is layered with the soulful harmonies of Mary Pearce, manipulated vocals and even makes way for a rap interlude. The deep bass is brought alive when accompanied by vinyl scratching and vocal flourishes.

Freaky Toe is slower in pace but has the same distinctive deep bass and oozes grooviness right from the first beat. Charlotte Kelly’s vocal is smooth as honey and blends beautifully with the male harmonies. This leads straight into B Side: more heavy bass and soulful vocals courtesy of Mary Pearce but with the accompaniment of Fred Wesley’s trombone skills which lend a slight lounge vibe to proceedings.

Up next is Starkiller which is characterised by a much slower tempo and poses as a short interlude with an intergalactic spin as manipulated voices speak of artificial intelligence.

The next track, Headache, once again features the signature gruff vocal of George Clinton. The repetition of “What am I gonna do when I need somebody?” becomes almost like a mantra when sung by Nina Scarlett. Clinton sings of “a headache in my heart” and “a heartache in my head” as the tantalising electric guitars let loose.

There’s a slight off-kilter feel to 2 Cold 2 Hold with its layers of percussion, keys, straining guitars and heavy drum beats. This track returns to the rap-style vocal of Up Is Just A Place, lending a different flair to proceedings, especially when combined with the honey-toned gospel-esque female vocals. The harmonica, courtesy of Mitt Gamon, adds a bluesy feel which is already apparent from the funky, jazz-style beats.

Our Lives, which features Earl 16, Lee ‘Scratch’ Perry and Dennis Bovell, was the first single taken from the album and it possess a predominantly Jamaican flair with its reggae leanings. The bass is super heavy and the off-beat guitars set the scene for Earl 16s effortless vocal where he sings of the fleeting nature of life: “In this life that we’re living, thanks and prayers are you giving. It’s not a bed of roses, but we still give thanks and praises.”

Still Here incorporates an astounding saxophone display by James Gardiner-Bateman in this largely instrumental track. The trumpets truly flourish when coupled simply with the deep, bassy beat and a smattering of electronic elements. “I’m still here” signals the return of the vocal before it transitions into a rap which has an unquestioningly cool smoothness.

Final track on the album, Discopia, begins with simple hand drums before a flurry of harmonies and electronically manipulated vocals come to the fore. This track is another great example of what a complex sound can be achieved from layering an array of elements. Electronic rhythms, smooth female harmonies, pounding bass, soaring electronic guitars and psychedelic undertones combine resulting in an addictive, unrivalled sound.

When speaking of the album and its inception Richie Stevens said: “Eight years ago, compelled to generate some funk, I started a bag of jams. By chance, I ran in to Omar in a supermarket and he improvised some melodies on the sketches. Then sitting in Liverpool St station, I was compelled again, this time to reconnect with George Clinton. His vocal for Up Is Just A Place was gifted to the project. This raised the funk bar so high that it took another five years to complete an album worthy of his genius and took the help of the finest musicians I know. This whole project is, in a word, a jam. With the finest musicians and artists you could find, who wouldn’t wanna do that?”

Smudge All Stars’ self-titled debut album is available to stream now. Find out more about Smudge All Stars here and have a listen to the whole album below.