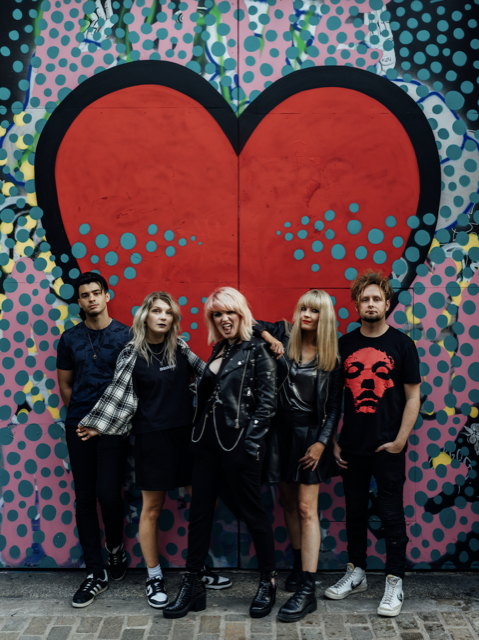 Female-fronted alt-rock five-piece Salvation Jayne have burst back onto the scene with their first full-length album A Mouthful Of Magnificent Spite.

Comprising of Chess Smith (vocals/keys), Holly Kinnear (guitar), Tor Charlesworth (drums), Dan Lucas (bass) and Erim Ahmet (keys), Salvation Jayne have been honing their angsty, riff-laden rock since the release of their debut single Coney Island, Baby! in 2020. This rocking debut was followed by the more recent and no less head bang-inducing singles Violent Silence and Cody and it’s with A Mouthful Of Magnificent Spite where the band are really hitting their stride.

Opener Apathetic Apologies is a hot slice of alt-rock that introduces us to the heavy themes and even heavier guitars which we will come to recognise as Salvation Jayne’s trademark. The chorus of “I wanna stay but you keep hurting me, hurting me oh I need a break from this ever-losing game” is anthemic and stays with you long after the final beat.

Violent Silence is a fun blend of frantic guitars layered over chipper synths where we feel like we’re racing at 100mph. The brakes are slammed on with the transition to the downtempo Diadem, a moody offering with a gritty backstory where Smith sings of the unexpected and unwelcome truths that can be borne from the most outwardly perfect relationships.

No Antidote, inspired by the sense of devastation felt when “the headline came out about musicians having to unlearn their art and find another job” when the pandemic hit, showcases Smith’s soaring vocal range which is stunningly offset by guitar solo after guitar solo. This leads us into the riff-heavy I Am Simply Not What You Thought, where the parallels between Smith’s and Hayley Williams’ vocals can no longer be ignored. We’re then plunged headfirst into the mosh pit that is A Mouthful Of Magnificent Spite before cooling off with the relative serenity of Cody: heavy riffs replaced by gentle guitar plucks and emotional harmonies.

Thought-provoking themes form the basis of many of the tracks, no less on Drink You Down, which explores the toxicity of love and hate within a relationship, the metal-influenced sound the opportunity for the band to let loose and showcase their heaviest side.

A Mouthful Of Magnificent Spite draws to a close with the angsty Cylinders where Smith vents her frustrations at the 9 to 5 life we’re all expected to conform to and Poveglia where Smith appears at her most vulnerable. The riffs are stripped back and the guitars take on a more hedonistic feel as they set the backdrop to a softer vocal which is enhanced by the almost gospel-sounding harmonies. It’s a joyous ending to an album which marks just the beginning for these up-and-coming alt-rock heavyweights.

Salvation Jayne hail from Kent and, since their debut single in 2020, have been selling out multiple shows across the UK as well as supporting Milk Teeth, Saint Agnes and The Subways.