Album Review: Patch And The Giant – All That We Had, We Stole 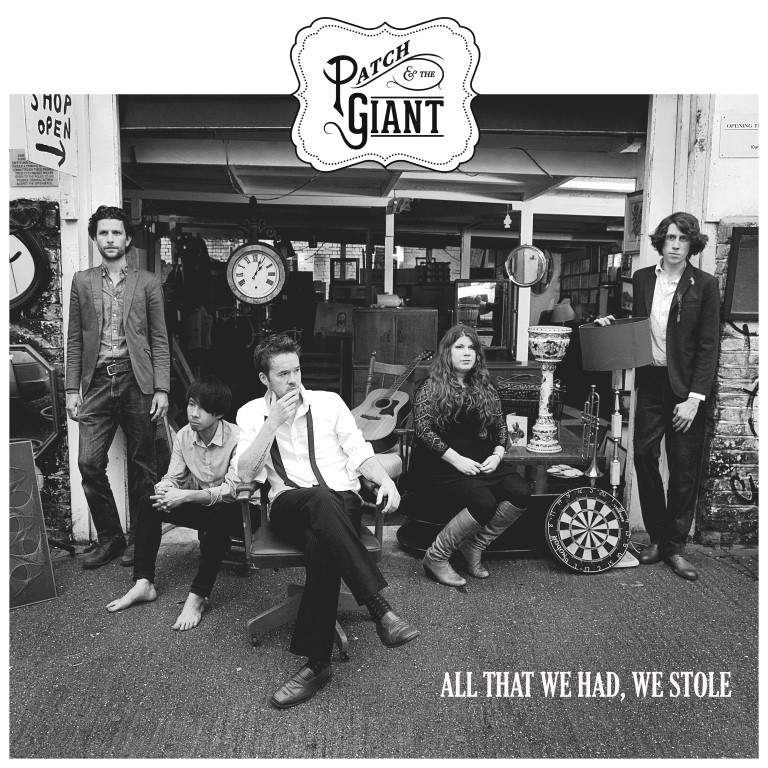 Patch And The Giant bring their brand of indie-folk to the masses this week with the release of their debut album. The London-based five-piece have been making waves on the alt-folk scene since releasing their debut EP The Boatswain’s Refuge back in 2013. But 2017 looks set to be their biggest year to date as they delight all folk fans with the release of All That We Had, We Stole on Friday 10th February.

Comprised of Luke Owen, Angie Rance, Gabriel Merryfield, Nick Edward Harris and Derek Yau, Patch And The Giant have seen their folk-loving fanbase growing. The quintet has played numerous festivals such as Secret Garden Party, BoomTown Fair and Standon Calling and has supported bands such as Keston Cobblers’ Club, The Twilight Sad and To Kill A King. The band have been savouring every moment during the process of creating All That We Had, We Stole. Angie Rance, one of the multi-instrumentalists in the band backs this notion up when she says “even though we can’t wait to get the record out there, it’s also a weird and slightly reticent feeling that this process will have finally come to its end and we have to release these songs into the wild.”

The album is kicked off by The Beggars Song, which is all strong, choppy beats and soothing violins. The folk influence is unmistakable with the trumpet interludes and the multi-layered percussion during the choruses. Luke’s vocals are gruff and imperfect, adding a sense of authenticity to the band’s sound.

A Local Man is more upbeat and chirpy, conjuring up images of barn dances on hazy summer evenings. The accordion accents blend nicely with the percussion and violin and Luke’s voice is a little more polished on this track. Certainly a radio-friendly track and one of my faves from the album.

The mood is taken down a notch with The River, a beautiful, heartfelt ode. The gentle melody is accented by the moody violins and strumming guitars. But this isn’t a track which cowers in the background: the vocals, trumpet and percussion graduate towards the end, intensifying and then dropping off without warning.

Harmonicas come out to play in Love And War, another gentle ballad-esque track with subtle folk references. Coupled with the strings, bubbly guitars and sudden introduction of the deep, intense double bass, the harmonicas add an upbeat air to a track which may otherwise feel subdued.

The Sleeping Boat is a track which I’d image is great fun to hear live. I sense the influence of traditional sea shanties in this track with the double bass, accordion and harmonicas all coming together to form a swaying melody that challenges anyone to resist clapping along. There are multiple references in the lyrics to the ocean and sailing, further adding to the nautical theme.

Another Day follows a similar vein with the sea shanty style of sound. Once again, it’s a track which begins unassuming enough but comes to life as the multitude of instruments kick in. Trumpets take centre stage here as the vocals part and make way for a great dance-long musical interlude to see the track out.

America is where the album reaches peak sea shanty-style folk. A track about setting sail across the Atlantic for America, a great scene is set in preparation for a wonderful voyage, setting off into the unknown. Once again, there’s a myriad of traditional instruments at play here, continuing the theme of music from a by-gone time.

The Walk And The Weight is a beautiful, serene ending to the album. Luke’s vocals are accompanied by delicate feminine harmonies against a barely-there backdrop of plucking guitars. The gradual introduction of the trumpet at the close of the track harks back to times gone bye. It’s a beautiful wind-down to an incredibly generous album.

Patch And The Giant have brought something unique to the table here with a musical style that isn’t just textbook folk. Their brand mixes a few blues influences along with the lesser-heard sea shanty style and blended together by an eclectic mix of traditional instruments such as the accordion, harmonica and mandolin. They remind me of Keston Cobblers’ Club with their multi-instrumental capabilities but with a heavier, less polished edge. The rough edges are what give the tracks their character and I can imagine in a live setting there’s plenty of possibility for improvisation. At 14 tracks, All That We Had, We Stole is a bit of a beast but for dedicated folk fans I can imagine it would seem heaven-sent.

To celebrate this Friday’s release of All That We Had, We Stole, Patch And The Giant are going on tour starting off this Friday at The Brewhouse, London. Find out more about the band and where they’ll be touring here. And have a listen to The Beggars Song below.