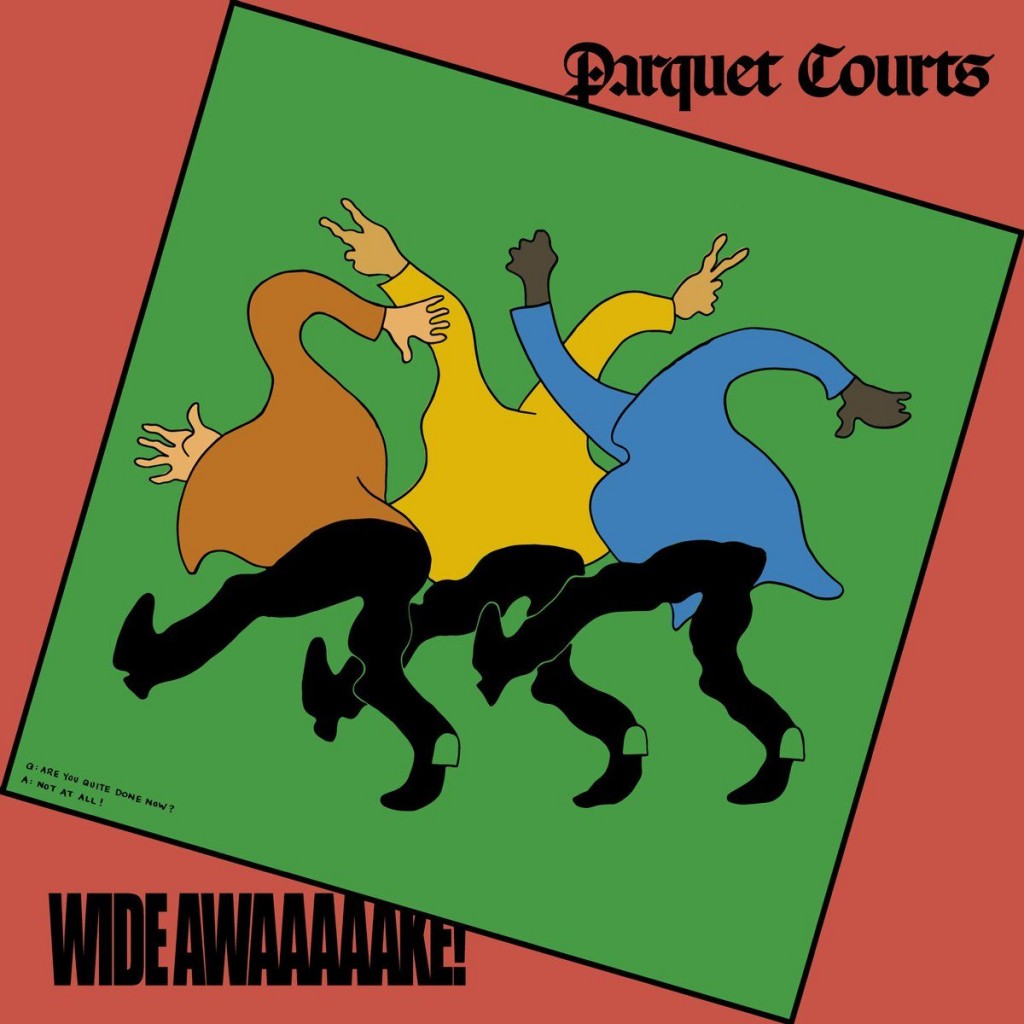 With Danger Mouse (Brian Burton) helming the production, ‘Wide Awake’ is Parquet Courts most expansive and eclectic album to date, showcased by the irresistible funk-pop of the title track, the washed out bubblegum pop of ‘Mardi Gras Beads’ or the straight shooting garage rock of ‘NYC Observation’.
The album kicks off with the bouncing bass of ‘Total Football’, where singer Andrew Savage addresses his desire for communal unity over society’s rampant individualism “collectivism and autonomy are not mutually exclusive/those who find discomfort in your goals of liberation will be issued no apology”. The track sets a clear precedent for the majority of ‘Wide Awake’ with the majority of the tracks following a similarly biting socio-political edge, which is seen immediately by the excellent following track; ‘Violence’. It features some more great bass work, which when combined with the group vocal work on the hook “Violence is daily life!” is reminiscent of hardcore punk bands such as Fugazi or Black Flag. Quick firing on the verses in a similar style to something you’d find on a track by The Fall or Sleaford Mods, Savage takes aim at America’s institutional apathy towards violence, and the inordinate blame attached to minority groups “The pink tube of paint called flesh/ used in portraits of chairmen of boards/ and men who clean up streets named after those who fought”. ‘Normalization’ works as a companion piece to ‘Violence’, Savage projecting a similar hostile rhetoric “Normalization, what am I thinking?/Immunization, got work conditioning” over some quirky guitar leads and a whizzing keyboard break.
One of ‘Wide Awake!’s strongest provocations “Almost Had To Start A Fight/ In and Out of Patience” begins with Savage’s spluttering, frantic delivery over some tight, muscular garage rock with some standout drumming from Max Savage, which transitions mid-way into a jaunty pop-punk bop, with some sweet, soaring backing vocals. The two tracks work well spliced together, recalling the urgency of a live performance, scrapping the arrogance of a fade out finale and moving from one punk thrasher straight into the next.
As mentioned earlier, the band have continued to further expand their biting, art punk sound on ‘Wide Awake’ and this leads to some of the records most intriguing and pleasing moments. ‘Back To Earth’ interestingly has a hip-hop style beat, but the gloomy production and monotone vocal delivery leads the track into having more in common with material by bands such as Joy Division. ‘Death Will Be Bring Change’ has a pleasant 60s psych-pop vibe, which is then juxtaposed by the eerie children’s choir chorus of the title, and the excellent ‘Wide Awake’ features an infectious funk riff worthy of Nile Rodgers. ‘Freebird II” sonically parallels it’s namesake in its use of  vintage organ leads and southern rock guitars, and it shifts away thematically from the conscious tone of the rest of the record too, with Savage instead opting for some touching self-reflection on his youth “I’ve learned how not to miss/ the age of tenderness/ that I am so lucky to have seen once” and personal relationships “The first name I called you is not a name at all/ But I’ll pretend it had a function”. The lo-fi buzz of ‘Before the Water Gets Too High’ is a slow paced highlight,  its core strength coming from the desperate lyrics of  corruption, negligence  and lack of environmental concern. Whilst the flat delivery initially makes the track feel too drawn out, after multiple listens I feel it accurately represents the apathetic attitudes Parquet Courts are attempting to expose, and thus lines such as “To float the powers that be/ Or is it someone else’s job/ Until the rich are refugees” end up all the more impactful.
Closing track ‘Tenderness’, evokes a similar tone to the aforementioned ‘Freedbird II’ in its use of a jaunty knees-up piano, funk rock guitars and the dive-bar singalong of it’s last line “Like a junkie going cold/ I need the fix of a little tenderness” which acts as a poignant sign off for all that Parquet Courts have emptied into ‘Wide Awake’; a heartfelt rallying cry in the hope of a (wide) awakening against the hardships and inequalities found in America 2018.