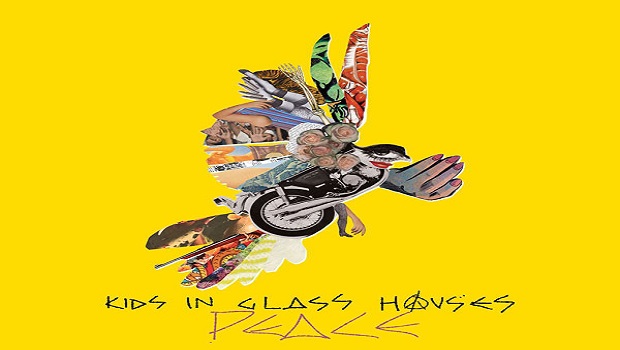 The Cardiff rockers of Kids In Glass Houses have spent some time away and apart from their Christmas return with Secret Santa last year, we haven’t heard from them since 2011’s ‘In Gold Blood’.

When news of a new album reached us in March, fans of the fun-loving, energetic band knew they’d be in for a treat. Lead single ‘Drive’, which was released in July, suggested that the band had taken a more electropop route whilst maintaining the solid grit that has always been there.

Indeed, there are a lot more upbeat pop sounds on this album and they’ve clearly discovered the wonders of electronics, as there are also an infiltration of whizzes, bounces and thumps. However, they haven’t totally re-invented themselves- there are still enough of their rock foundations to recognise them.

In fact, the opening title song is a great example of it. It’s a traditional Kids In Glass Houses song with an upbeat pop-punk sound, a fuzzy guitar and an fiery chorus. Despite it’s name, it’s the young rebel’s song that allows you to just let off some steam, suggesting it’s a call for peace rather than a celebration of it. ‘V-I-People’ is another alternative track, which actually reminds me of Lostprophets. A fast paced drum, a screeching guitar and melodic vocals make up this angsty song, which demands “If all men are created equal, then who are all these V I People?”. A sentiment we can all easily understand and relate to.

Their new electropop flair is most prominent on ‘Set My Body Free’ and ‘Black Cloud’. The former merges bouncing pop guitars with their signature Americana pop-punk vocals. Again, it’s a hormone-ridden party anthem with a funky beat and a summer theme in the electronic backing. Using the bleeps and bounces of the electronics on another party song ‘Black Cloud’, the band give us an idea what they’ve spent the last two years doing -partying (and honing a new style). Sunny riffs and a catchy melody make ‘Black Cloud’ a great upbeat addition to the record an a great choice to place near the end.

Most of the central tracks including ‘Novocaine‘ and ‘Storm Chasers’ have the ringing riffs and thumping beat that Kids In Glass Houses are known for. ‘Novocaine‘ is more of a chilled out number whereas ‘Storm Chasers’ is a passionate sing-a-long that is reminiscent of their earlier ‘Smart Casual’ sound. Both have a great summer vibe that will certainly cheer you up on a gloomy autumn day. Likewise ‘The Runaways’, which includes a catchy chorus about being young and free, allowing you to drift into a wonderful carefree state.

Closing track ‘Nightcrawler‘ is a great showstopper. It does have a spooky, creeping feel to it and the resonating chimes add shivers to the mix. A soft guitar lightly framing the desperate passionate vocal is all that is needed to really bring this track to life. It’s quiet for the most part creating an atmosphere that could be cut with a knife before exploding into a circular chorus, which slowly turns over and over, as the swaying rhythm gradually slows and a gentle riff plays it out.

It will start you off without any peace at all but by the end, you feel content and relaxed, so I’m pretty sure it does its job. If you’re already a fan of Kids In Glass Houses, beware that it isn’t as rock-based as they have been in the past. Introductions of a softer approach and the futuristic sounds of the electronics are the main game players but there definitely is something for the fans that have been with them since the start.

Check out the Music Video for title track ‘Peace’ below: