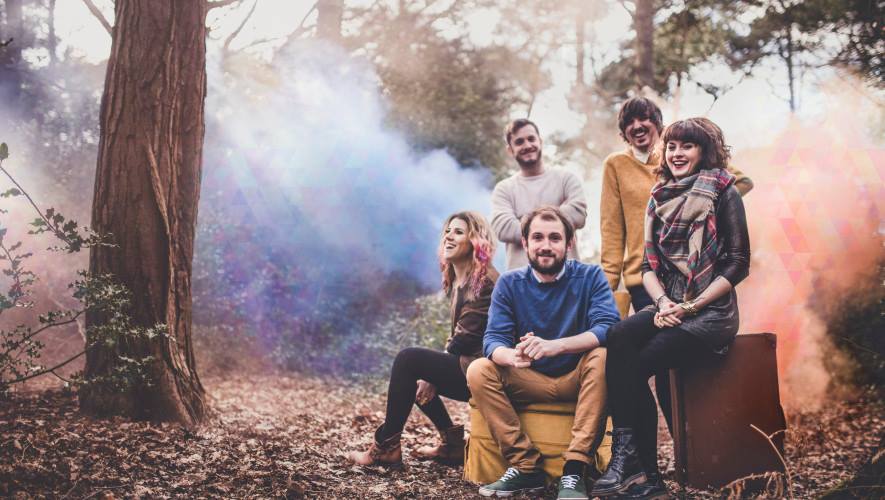 "The band played a combination of classic Keston Cobblers Club tracks along with new ones from Wildfire. The album itself is easy to listen to and each song is set apart from and a little different to the next, be it due to a trumpet solo, electronic keys or even the presence of an accordion…"

Folk act Keston Cobblers Club released their second album ‘Wildfire’ in the middle of June and we were lucky enough to attend their sold out album launch at The Lexington.

Keston Cobblers Club are gathering quite a following since the launch of their debut album ‘One, For Words’ in 2012. They are making folk music more accessible and bringing it to the masses with their poppy folk infusion which blends contemporary and traditional sounds. The talented five-piece incorporate guitar, banjo, drums, keys, trumpet, tuba, accordion and some tinkling bells to create a unique sound which appeals to an audience young and old, swapping between these instruments as they go! Their performance at The Lexington was entertaining from start to finish, with a real festival vibe about it, and they really engaged with the audience, at one point even having a dance off competition!

The band played a combination of classic Keston Cobblers Club tracks along with new ones from ‘Wildfire’. The album itself is easy to listen to and each song is set apart from and a little different to the next, be it due to a trumpet solo, electronic keys or even the presence of an accordion…

‘Laws’ kicks off a dramatic start to the album with its sweeping harmonies, deep bassline and haunting piano melodies. It has an air of the theatrical about it and demands your attention right from the start. ‘Win Again’ provides a stark contrast to the opener with its ethereal female vocals which are almost choral in sound. The gentle percussion is upbeat and interspersed with trumpet solos.
Soon to be classic summer anthem, and current single ‘Won’t Look Back’ is chirpy and full of feel-good vibes. You can watch the official video below!

‘Contrails’, my favourite track on the album, stands out due to the harmonies that are strangely reminiscent of owl calls. It’s one of the band’s slower album tracks but played live and stripped back it showcases Tom’s amazing atmospheric vocals.
As with many of KCC’s songs, the title track ‘Wildfire’ takes the listener on an exciting journey from start to finish, with the vocals ebbing and flowing along the way,  incorporating rapid electronic keys and layered harmonies with expert ease. ‘St Tropez’ is another playful track with its soft electronic computer-game-esque sounds providing a backdrop to Tom and Julia’s harmonious vocals. It’s a great example of how KCC bring together traditional and contemporary musical sounds: two musical worlds that collide beautifully.
As we move through the album, the tone alters with the introduction of ‘Half Full’, a downtempo track that showcases Tom’s vocal range and highlights the bands versatility. When played live, it provided a beautiful interlude between all of the fast-paced, eye-catching tracks KCC are known for. ‘Once Had’ was a slight country influenced sound thanks to the banjo and the variety of simultaneous harmonies, making for a happy, sing-a-long tune.
‘Longer Than Gone’ features multiple trumpet and tuba solos and, coupled with the guitar and banjo, a sound which is quite light-hearted and playful but also a little melancholy at the same time. following in similar veins, ‘Sober’ has a sorrowful vibe about it with its down tempo sound, vibrato vocals and mournful trumpet interludes but closing song ‘The Mad’ is a deep and atmospheric track that builds gradually and ends the album on a high.

‘Wildfire’ is an album which showcases folk music and attempts to bring this genre into popular culture. Where many artists rely heavily on electronically created sounds and digitally manipulated vocals, Keston Cobblers Club’s brand of music is stripped back, honest and it’s refreshing to see unusual instruments like the accordion and tuba used in a contemporary way. Keston Cobblers Club have opened my eyes to a whole new world of music and I recommend that you hear them for yourselves.

Check out the video for new single ‘Won’t Look Back’ below. Released on the 15th June, you can download their album Wildfire from iTunes here.