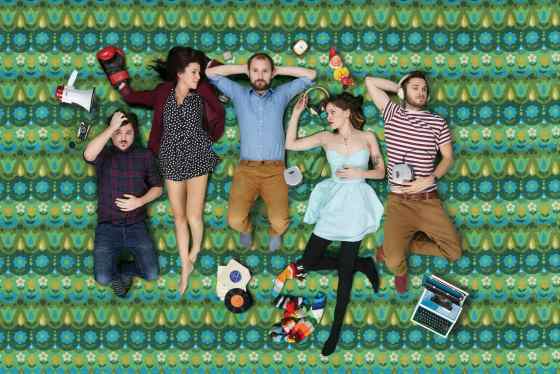 Incredibly excited about this new experimentation.

Folk-pop five-piece Keston Cobblers Club release their second album Almost Home this Friday. The eagerly anticipated album is the follow up to debut Wildfire, released in 2015 to copious reviews praising their take on folk with a poppy edge.

The band, comprised of siblings Matt and Julia Lowe, Tom Sweet, Bethan Ecclestone and Harry Sasinopoulous, formed in Keston, Kent and it’s at the Lowe family home that their music is brought to life. The band record and practise there and the name of the album alludes to this personal connection they and the listener have to that one special place that they call home. You could say they’ve gone slightly off-piste with this new offering, incorporating layers of electronic embellishment in addition to moments of stripped back, raw vocals…

Opener Almost Home is a mellow introduction to Keston’s brand of poppy folk. Plucky guitars and banjos give the track a bubbly, singalong feel. This theme continues on Concord, a fave of mine from the album, which begins with rapid banjo strings and Matthew’s isolated vocals before the echoing drums enter to start the percussions’ gradual build up. The atmosphere intensifies as strings, keys and trumpets join the line-up, resulting in a beautiful and glorious crescendo.

Demons is an incredibly catchy track where Matthew and Julia’s vocals merge together in perfect harmony. Trumpets add an almost regal feel to the track which is further punctuated as a multitude of voices harmonise together at the end.

On Your Own opens with an incredible attention-demanding drum roll and trumpet flourishes before fading out, allowing funky guitars to come to the fore. There’s a distinct 70s disco vibe to this track, one which is unexpected from KCC but suits them well. The bands signature male and female harmonies and brass accompaniment still work brilliantly when jazzed up with these electronic elements. Certainly a stand-out track on the album.

Forest Hill is all brooding guitars and strong baseline, bringing a heavy atmosphere to Tom’s vocals. The drummer-boy style percussion layered over the jarring keys and intense vocals bring a wonderful yet chilling edge to the track. Continuing on the theme of the unexpected sound, Hand That Feeds You has a jolly feel from the intro but which is suddenly broken by an incredible mix of percussion.

The tempo is taken down a notch with Walls. Matthew and Julia sing in unison once again, accompanied by rolling waves of brass and an intense baseline.

Another surprise offering: Winning goes from 0 to 60 in less than a second and has an almost Caribbean vibe with the hand drums, funky bass and tropical vibes from the numerous forms of percussion. It’s like a fusion of musical styles from far and wide and can’t help but make you smile. A brill track for summer.

An Island has an incredible electronic/keys/bass opener which is totally unexpected but awesome. It fades as fast as it arrives, leaving only Matthew, Julia and a piano with an unmistakable intensity. A blink and you miss it track, it certainly leaves you wanting more.

Piano keys are centre stage in final track All I Need which is downtempo and brooding. Trumpets and the signature KCC vocals gradually come to the fore before the track descends in an electronic whirlwind. The pace quickens and we’re taken on a galactic ride to an unknown destination.

After being familiar with KCC ‘s musical style from hearing Wildfire, I’m taken aback but also incredibly excited about this new experimentation with electronic sound merged with classic instruments. It is subtle and adds a completely new dimension to the tracks, without taking away from their folk roots. There are times though that I wish the fusion of electronic sounds and folk instruments weren’t in such fleeting bursts. After watching KCC perform in 2015 I know they’re partial to a bit of improv when playing live so I look forward to what their live takes on these tracks will be when I see them next month at the Union Chapel.

Find out more about Keston Cobblers Club here and have a listen to opening track Almost Home below. The album Almost Home is released this Friday 31st March.