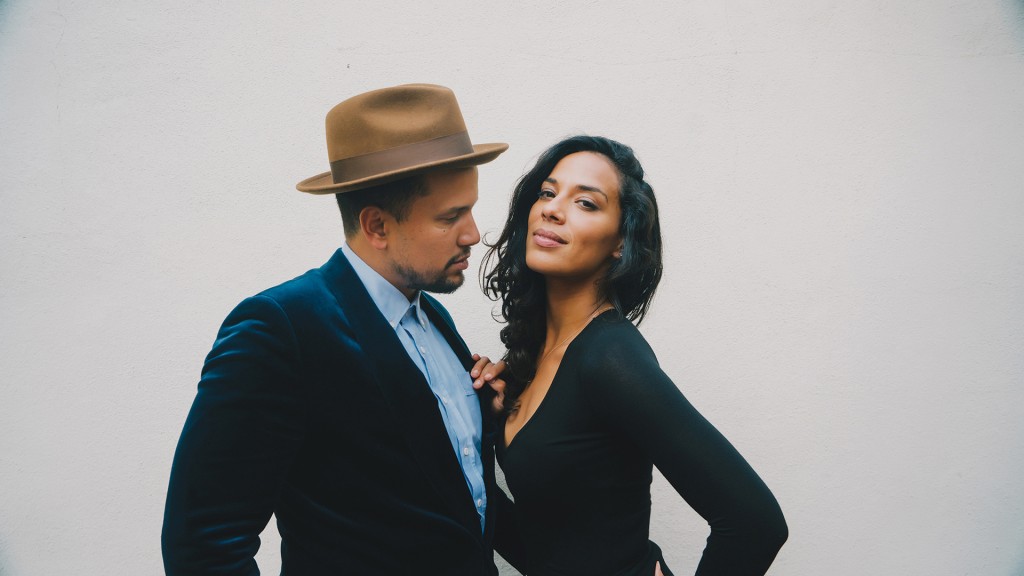 The country and choral influences elevate the album to new heights, making it a joy to listen to from beginning to end.

American folk and blues duo Johnnyswim release their debut UK album Georgica Pond next month. The album was recorded between the couples LA home studio and at the Castle in Nashville, with the pair collaborating with Nashville-based singer/songwriters Natalie Hemby and Chris DeStefano as well as country music icon Vince Gill. Thus, a strong country influence runs through many of the tracks.

Abner Ramirez and Amanda Sudano Ramirez met in Nashville in 2005 and developed a songwriting partnership, forming Johnnyswim that same year. The pair’s connection was much deeper than purely musical and they established a romantic relationship, marrying in 2009. Over the years, the duo have released three EPs and have performed on numerous high-profile US TV shows such as David Letterman’s The Late Show and Jay Leno’s The Tonight Show. Johnnyswim released their debut album Diamonds in 2014 to widespread acclaim which has sold 50,000 copies and has accrued almost 30 million streams.

Now, the duo have set their sights on the other side of the Atlantic as they release their debut UK album, Georgica Pond. After the success of their debut album, Abner and Amanda discovered a confidence in their musical style and ability with Abner noting, “any fear we had on album one has completely evaporated. We know the people that come to Johnnyswim shows. We know it matters to them what we have to say”. Georgica Pond, therefore, is a delight to listen to, transporting the listener to a serene and blissful space.

Welcome To Georgica Pond is a soft, blissful intro which makes way for first track Hummingbird to bowl in with its rocky guitar riffs. Hummingbird is punctuated by the sensual guitar which demonstrates a Nashville-inspired country twang during the verses before building up to a classic rock edge on the chorus. Abner’s vocal is smooth and delicate while Amanda’s brings punch and clout to the track: a perfect opener and one of my favourite tracks on the album.

Summertime Romance is beautifully stripped back on the verses before developing poppy undertones as the chorus progresses. The duo’s vocals work harmoniously together in unison, with neither feeling drowned in the presence of the other. The acoustic violin outro is a blissful ending.

Villains is another incredibly catchy pop-influenced track with an addictive electric guitar throughout. The acoustic guitars and backing vocals build the sound and the duo’s vocals bounce off each other brilliantly.

Touching Heaven depicts the delicate side to Johnnyswim: glorious keys coupled with gentle guitars and sultry vocals. The track builds to the introduction of a stunning choir vocal, lending the track a spiritual air with their chants of “you’re my hallelujah”.

The choral theme is continued on Let It Matter, another of my favourite tracks, where Amanda’s vocals reach a new level of beauty when combined with exquisite harmonies. The gentle melody and understated guitars lend a complimentary bluesy edge.

A striking cover of Chris Isaak’s classic Wicked Game provides the perfect close to the album. The track opens with a beat akin to a heartbeat, before Amanda’s vocals cut through, beautiful and atmospheric. An incredible whirlpool of emotion arises as Abner’s heady vocals reach stunning heights. Pared back and slower in pace than the original, this is a wonderful cover which breathes new life into a classic.

Georgica Pond is an album to lose yourself in, with Johnnyswim inviting you to immerse yourself in their extra special take on folk and blues. The country and choral influences elevate the album to new heights, making it a joy to listen to from beginning to end.

Georgica Pond will be released on 3rd February. Find out more about Johnnyswim here and have a listen to Hummingbird below.