Album Review: Fozzy – Do You Wanna Start A War 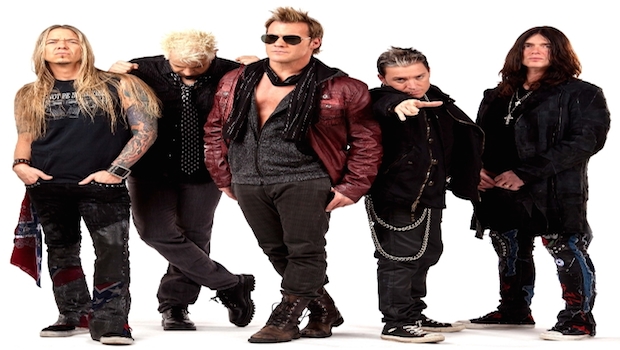 Two years have elapsed since the release of Fozzy’s most popular album to date, Sin and Bones. Today, we welcome their newest addition to their ever-growing discography; Do You Wanna Start A War.

Since the release of the album’s first single, ‘Lights Go Out’ (our review can be read here), ‘Do You Wanna Start A War’ is one of the year’s most hotly anticipated albums for Fozzy and metal fans alike. While two years may seem like a long time to some, the band has been far from quiet. Touring with monster rock bands such as Buckcherry, Steel Panther and Avenged Sevenfold, it’s a wonder how they found time to record the album. Regardless, the band has managed to out-do themselves with what could be the best album of their 15 year tenure together.

The first song we hear on the album is the title track, ‘Do You Wanna Start A War‘. Mixing sirens and a bouncing guitar riff, we’re thrust into a world we didn’t know existed in terms of Fozzy’s music. Capitalizing on the catchy choruses that were praised highly on the Sin and Bones album, ‘Do You Wanna Start A War’ is based around a verse catchier than anything the group has released prior to this. In the last minute of the song, you’ll find yourself singing along with Jericho’s lyrics, even if it’s your first time hearing the track.

‘Bad Tattoo’ does a great job in showcasing Rich Ward and Billy Grey’s superb riffing skills. The main riff of the song is actually very reminiscent of some of Mark Tremonti’s work in Alter Bridge. The tune’s chorus is quite tongue-in-cheek, as Jericho claims he “can’t get rid of you, you’re like a bad tattoo.” ‘Bad Tattoo’ does a nice job of showing us Fozzy’s fun side, without sacrificing their musical prowess in the process. The same can be said later on in the album, when the band surprisingly cover ABBA’s ‘SOS’. Putting a rock n’ roll twist on the song, this version wouldn’t seem out of place on a classic rock compilation – complete with chorus harmonies and flawless keyboard/synth work!

‘Died With You’ shows Fozzy’s somewhat softer side in the form of their most mature ballad to date. Following the quiet intro, the chorus manages to punch you in the face with its sheer power, all the while holding on the roots of the ballad. This song is one of the stand out tracks from the album, and showcases Jericho’s underrated abilities as a vocalist and a frontman.

Following the ballad is one of the band’s most joyful and fun tracks released to date. Featuring Michael Starr from Steel Panther, ‘Tonight’ is an upbeat tune that details the bands’ wish to have a good time while “throwing caution to the wind.” While it may not be a musical masterpiece, this song is definitely an uplifting effort that you won’t easily forget anytime soon.

Seemingly taking influence from bands along the lines of Black Label Society, ‘Brides of Fire’ is a fast, catchy tune complete with a blistering riff and excellent double bass work from drummer Frank Fontsere. Rich Ward’s growling makes an appearance here, reminiscent of ‘Blood Happens’ from the band’s previous album. This is easily a must-listen for fans of any sub-genre of metal, being another stand-out track from the album.

Next up is ‘One Crazed Anarchist’. Also released as a single prior to the album’s release, this song is extremely infectious. As soon as the verse hits, you will find yourself bobbing your head to the solid beat and singing along to the lyrics which I can describe best as “badass”. In my opinion, this here is the album’s hottest song, though it was an extremely tough choice to make given the incredible track list on ‘Do You Wanna Start A War’.

‘Unstoppable’ features vocals from Christie Cook, and adds a brilliant new element to Fozzy’s music. The harmonies present here are reminiscent of Halestorm’s work, and make it a song that could easily be a fan-favourite. ‘Scarecrow’ follows this, oddly. This is an obscure track that could also be described as fairly creepy. The band doesn’t let you settle into a comfortable state until the chorus, changing the tempo at each phrase up until then. We’re haunted by the echo effect littered throughout the verse, and the lyrics remind us of ‘Paraskavedakatriaphobia’, a fan-favourite from Fozzy’s 2010 release Chasing The Grail.

‘No Good Way’ is an awesome song towards the end of the album that once again shows us how Jericho has hugely improved as a vocalist and song-writer. Declaring there’s “no good way to die”, the band rip through a musically sound track that should become a staple to their live set.

Album closer, ‘Witchery’, is the heaviest song present on the album. It was definitely the best choice to end with, as we have all of the album’s best qualities present. Ward’s growling and underrated guitar work, Fontsere’s great drumming and the catchy hooks are all found in this song. If anything, the only thing we could ask for at the end of the song is for the album not to end. Thank God for the repeat button!

‘Do You Wanna Start A War’ is an excellent effort by Fozzy. They have managed to reinvent their sound without disposing of the traits that we’ve grown to know and love, as to not alienate long-time fans but to attract newcomers. It seems as though Jericho has managed to silence the critics who had claimed the pro-wrestler couldn’t carry the band with serious intentions.

We look forward to seeing Fozzy soon, and to all future releases they produce!

Listen to ‘One Crazed Anarchist’ below.