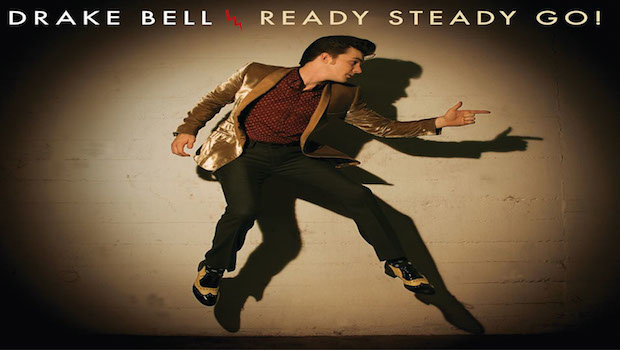 After a near-10 year wait since his last album, Drake Bell is back. Kind of.

We all remember Drake Bell from Nickelodeon’s show Drake and Josh, but few people know what he’s been up to since his starring role. It’s also been nearly 10 years since his last full-length studio album hit the shelves, but the silence has now come to an end with the release of ‘Ready, Steady, Go!’

‘Ready, Steady, Go!’ is a window into Bell’s influences musically, as the majority of the album is compiled of cover songs. Included are tunes from artists such as The Kinks, , Stray Cat, Billy Joel, The Move, The Jags and even Queen. These covers aren’t exactly revolutionary, but it’s clear Bell enjoyed recording the covers and you can’t deny he has some great taste in music! Unfortunately, what most fans will want to hear are his original songs, and there aren’t many found on this album.

Though lacking in numbers, the few originals we hear are actually the strengths of the album. ‘Bitchcraft’ is the first single released from ‘Ready, Steady, Go!’ and is a fun tune that will remind you of a 50’s/60’s song mixed with the vocal flair of Arctic Monkeys. ‘Makes Me Happy’ will bring you back to Bell’s Nickelodeon days as you’ve most likely heard it before on Drake and Josh or Zoey 101. It’s a lovely, joyous song that brings you on a trip down memory lane.

The absolute show-stealer here though is closing track ‘Give Me A Little More Time’. This ballad seems to combine all of Bell’s influences into one great song. With spoonfuls of rock ‘n’ roll, jazz and soul, you can almost define this artist with this song alone. A perfect choice to close an album which is mostly made of influential covers.

While it isn’t anything special, ‘Ready, Steady, Go!’ shows us a side of Drake Bell we’ve longed to see for years. Unfortunately, he holds back by not producing more originals. It feels as though he has a lot more up his sleeve, and hopefully this album is just reinventing his sound to prepare us for what’s to come. We’ll have our eyes on him, though, as it’s only a matter of time before he comes out with more handwritten material. We can only hope he realizes this is where the album’s strengths lie!

You can check out ‘Ready, Steady, Go!’ on iTunes, or check out the first single “Bitchcraft” below.