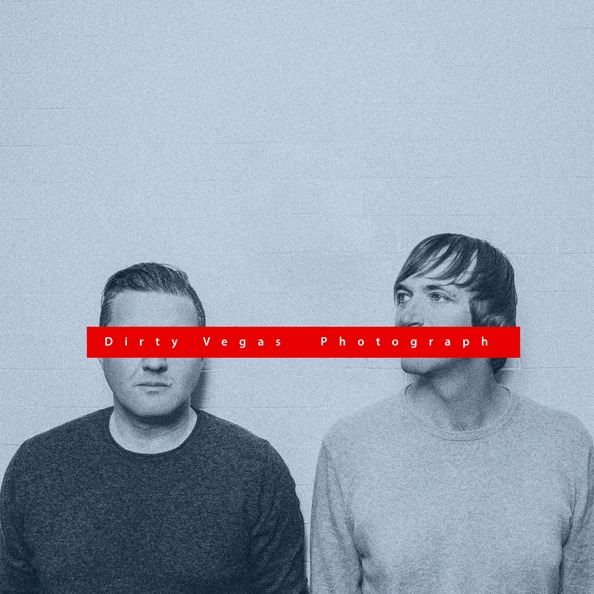 The perfect soundtrack to a night out or a road trip.

2015 is the year Dirty Vegas return to our airwaves with their fourth studio album Photograph. House/electronic trio Dirty Vegas sprung to fame back in 2001 when single Days Go By, with its deconstructed beat and manipulated vocals, was an international success.

Over the years the band has experimented with their sound: the house vibe made way for a dance-inspired beat, and then they introduced guitars to incorporate a more rocky edge but not before touching on funkier sound. Now a duo, Dirty Vegas have brought back their unique blend of electro pop ready for 2015. Let The Night is a brilliant opener, with its simultaneously chilled and festival-esque vibe. Steve’s vocals draw the listener in with a sound that’s been honed over the years and the contrast between the vocals on the verses and the chorus is stark but extremely complimentary.

Setting Sun opens with gentle strumming guitars and dainty keys which make way for the addictive beat and catchy chorus. It’s a song which would provide the perfect soundtrack to those late summer days where autumn’s fast approaching. Do What You Feel follows along the same vein with its heady mix of acoustic guitars, rapid beats and play on vocal range. These tracks have a slight country twang and are vibrant and uplifting.

Dirty Vegas aren’t afraid to experiment with an eclectic range of instruments and sounds which is noticeable as the album progresses:

Photograph opens with an incredible trumpet solo which conjures up images of smoke-filled jazz bars. However, we’re brought back to the current century as the pulsing beat kicks in. There’s a strong club vibe to this track with the pulsating beat and electronically manipulated sounds but the return of the trumpet gives the track an added edge. Beat To Drop is characterised by its pulsing beat and trance-like vocals which are peppered with what sounds like wooden Glockenspiels and tinny drums.

The duo return to their club-inspired sound on a few tracks such as Northern Town and Heartbeat. Northern Town builds from the start to a pulsating and attention-grabbing climax. This track has a strong dance vibe to it with the pulsing, reverberating electronic beats which wouldn’t be out of place on a David Guetta track. Heartbeat is a house-inspired track with a soft edge where the beat ebbs and flows, changing pace throughout.

One of the standout tracks on the album for me is Madness which has a bubbly beat and addictive sing-along chorus. The incorporation of deep, resonating drum beats contrasted against lighthearted guitar riffs and clubby, pulsating beats. It’s one of my favourite tracks on the album due to its poppy sound and summery vibe.

Shine A Light marks a move to a slightly more down tempo sound with an echoing beat, layered guitar riffs and atmospheric vocals. The slightly off-kilter sounding electronic elements further add to its appeal. Despite the fact that I can’t get the thought of Gary Barlow singing this track out of my head it’s still one of my favourites from the album.

The uptempo, poppy sound returns with a gusto on Reckless and the acoustic guitars are ever-present providing the choppy sound that’s become the hallmark of this album.

Save A Prayer is most definitely inspired by the club scene and has a distinct house sound about it with the throbbing beat and manipulated vocals. But you just wait for the chorus to kick in! “Don’t say a prayer for me now, save it till the morning after” I was not expecting this to be a Duran Duran cover but that’s what it is and it’s been done brilliantly. It’s been given a 2015 rework that’s simultaneously sympathetic and and kick-ass! I can see this being a massive club track as it’s such a world-renowned song.

Photograph also comes with the added bonus of acoustic versions of Setting Sun, Shine A Light and Reckless which portray the songs in a whole new light.

Photograph is certainly a move away from Dirty Vegas’ heavier, more house-inspired sound of a few years ago but it’s an album which has wide audience appeal as it has a bit of everything: poppy tracks, dance beats, folky elements, the odd trumpet thrown in for good measure and a bit of Duran Duran for the oldies! Photograph is full of radio-ready tracks from start to finish that are certain to lift your spirits and it’s an album that would provide the perfect soundtrack to a night out or a road trip alike.

Photograph is available to download from iTunes now but if you fancy a listen then check out the video for Let The Night and also that Duran Duran cover below!