Album Review: Call Me Malcolm – I Was Broken When You Got Here 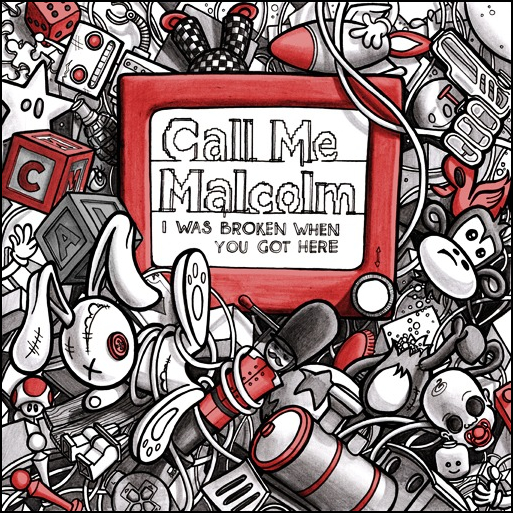 Call Me Malcolm us their craft to speak frankly on personal issues and mental health, delivering one of 2018's best UK ska punk albums in the process.

The subject of mental health is one of modern society’s hot button topics. We live in a world that paradoxically has never dedicated more time and resources to the field while simultaneously neglecting the needs of millions through stigma and lack of understanding. To speak candidly at length is to tear open old wounds in public view, but in so doing can prove therapeutic for both the speaker and the listener. This is what London ska punk band Call Me Malcolm have achieved on their latest album ‘I Was Broken When You Got Here’, and how. Previously known for their more lighthearted, tongue-in-cheek nature, gloriously demonstrated on their Bandcamp chart-topping debut ‘We Did This To Ourselves’, ‘I Was Broken When You Got Here’ find the band discussing their recent personal struggles in a stunningly open manner. However, it is a pleasure to say that this is by no means at the expense of any of their charm, and it is this combination of factors that makes the album so effective, and a great many will be able to relate to this record in a truly meaningful way.

To immediately establish the overall theme, the very first track introduces the albums framing device, clearly demonstrating that Call Me Malcolm haven’t lost any of their humour, even if now darker and more cynical in nature. Mimicking the asinine format of vacuous “self help” tapes, a light and vaguely-soothing backing track fades in accompanied by a voiceover that’s as calm as it is condescending. Assuring us that are problems are merely caused by our lives being “irretrievably awful”, while the cure is obviously “lighting a scented candle” and “counting to ten”. It’s a innovative way to highlight the frustration so many sufferers must have to endure on a daily basis.

The countdown never reaches its conclusion, however, being sharply interrupted by the opening song ‘The Gentleman And The Onion’. This is recurring feature throughout the album, with many tracks flowing into one another seamlessly, further establishing the feeling of the record as a constant outpouring of one’s demons. Much like its follow up ‘There’s No “I” In Apocalypse’, ‘The Gentleman…’ is as solid a ska punk anthem as could be hoped for, offering crunchy riffs with lashes of infectious horn melodies along with the band’s impressive three-part harmonies. They also perfectly set up the main narrative of the album, discussing the battle against increasing loneliness, isolation and dissolution in a world where communication should be easier than ever. ‘Restore Factory Setting’ sees Call Me Malcolm take a complete change in tone, with the sunny, bright reggae sound offsetting their frank look at depression, clearly aware of the irony. It’s effective and there is some fantastic songwriting here, but the sugary-sweetness of the production may set the teeth on edge for some. But after a few beers at a live show anyone will be grinning along to this one, despite the hard-hitting subject matter.

With ‘Inside Out’, Call Me Malcolm find a happy middle ground between the two aforementioned styles, bringing back some heavier elements but in a more melodic manner, and in the overall tone is somewhat playful in nature, sharply contrasting with the songs warning message about untreated mental conditions. This theme is continued with ‘Jacob’, which unfortunately feels like the most throwaway of the songs on offer. It must be stressed that, as with ‘Restore Factory Settings’, it’s a decent song and there’s plenty to enjoy here, especially during the gloomy instrumental midsection. But in the context of the album as a whole, the writing is ever so slightly lacking in comparison to the universally high standard on display. ‘In Treatment’ progresses the “story” of ‘I Was Broken…’, a tune with plenty of attitude that takes a bleak look at the trials and tribulations of going through therapy. ‘F.T.I.M.’ serves as a musical interlude between the two halves of the album. It’s a fun little number with plenty to get the feet moving, and at a slight 1:44 never outstays its welcome. This feeling carries over to the wonderfully-titled ‘It’s My Plagiary And I’m Going Home’, a more lighthearted offering with an irresistible singalong chorus.

Where some albums may start to trail off, Call Me Malcolm made the right choice in closing with three of the best songs on the record. ‘Show Me What You Got’ brings in a funkier groove and looks more outward, calling upon listeners to stand up and join together against the political injustices we face in our daily lives. ‘Now Wait For Last Year’ treads into the darkest territory of the entire album. A deeply personal one from guitarist/vocalist Lucias, the song details the emotional turmoil of losing his Father-in-Law in early 2017, which was also the catalyst for the 24 Hour Punks project. The most aggressive and raw track on ‘I Was Broken…’, it is the perfect soundtrack for someone clashing head-on with their own grief and pain, and ultimately breaking through. Which brings us to the frankly track, which frankly is worth the price of admission alone. If ‘I Was Broken…’ is the ongoing saga of battling your internal struggles, ‘All My Nameless Friends’ is the light at the end of the tunnel, the helping hand up, the arm around the shoulder and the gentle reassurance that everything will be ok. It is clear that music has played a massive part in Call Me Malcolm’s rehabilitation, and this is the thank you. It’s a tribute to scene that has been their home for so long, with the New Cross Inn and several of its inhabitants getting a cryptic namecheck along the way (we ain’t gonna list them, where’d the fun in that?). This track has it all: cracking riffs, ferocious horns, skank and mosh-able moments in equal measure, and a chorus that will have audiences roaring along for many a gig to come, before reaching a climax of “whoahs” (funnily enough to the same melody as the recurring “self help” segments) that’ll bring mist to the eyes of a coldest hearts. This will, without a shadow of a doubt, be one of the biggest songs in UK ska punk this year.

‘I Was Broken When You Got Here’ is a truly fantastic album, plain and simple. It’s 40 minutes of pure blood, sweat and tears, and the way Call Me Malcolm handle very real and often misunderstood topics in a way that makes you want to dance and sing is therapeutic in itself. Whether you yourself have battled mental illness or have struggled with the pressures of life, Call Me Malcolm are here for you to help lighten the load, if even for just a brief moment.

Call Me Malcolm has announced a series of UK dates in support of ‘I Was Broken When You Got Here’, beginning with the New Cross Inn on Friday 6th April.