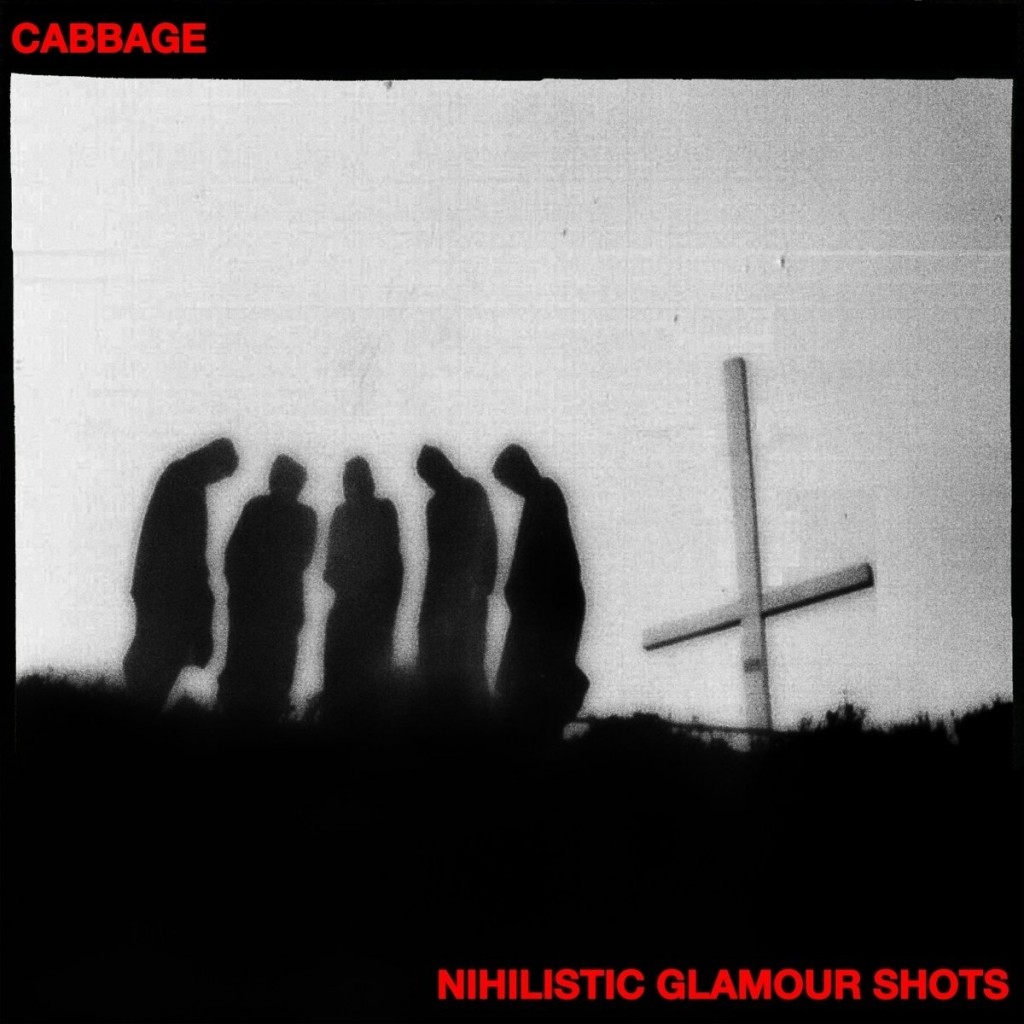 After multiple e.p.s and a compilation album, Mossley punks Cabbage finally release their long awaited debut album “Nihilistic Glamour Shots’. There was some trepidation attached to the record before release, that it would fall short of the mark of their previous work, and this was acknowledged by the group themselves, playfully calling it their ‘difficult debut album”.

Thankfully this is not the case, ‘Nihilistic Glamour Shots’ is an excellent record and any worries that it might not live to the quality of the group’s past work are chalked off within the first few tracks.
The opening track, ‘Preach to The Converted’ is just what you would expect from a Cabbage project, a quick-fire surf punk ripper with a hypnotic descending bass and manic yelps of ‘Preach! Preach!’ that ramp up the intensity towards the end of the song. ‘Arms of Pleonexia’ is a fantastic piece of singalong post-punk, with a menacing guitar chug on the verse which leads into the arms in the air chorus of “How long till we take responsibility?”. The songs benefit from having two lead vocalists in Joe Martin and Lee Broadbent, and on ‘Arms of Pleonexia’ the two project an almost Beatlesesque harmony on the chorus, whilst other tracks benefit from the difference between the singers such as the Dead Kennedys infused wickedness of ‘Molotov Alchopop’.

On previous work such as ‘Necroflat in the Palace’ and ‘Grim Up North Korea’ the band tackled social and political issues, projecting them through an often surreal and grotesque lens, and their unique take on things is still present on ‘Nihilistic Glamour Shots’.
Taking aim at the gluttonous and the powerful on ‘Postmodernist Caligula’ and ‘Arms of Pleonexia’, referencing the works of occultist and ‘wickedest man in the world’ Aleister Crowley on ‘Perdurabo’ and highlighting the ignorance and childishness of the political elite on the excellent ‘Exhibit A’. The latter’s instrumentals have a sunny, almost 1960s sound, with a nicely placed slide guitar towards the back end of the track, and the key changes in the verses make the song stand out among the more aggressive tracks on the record, such as the frantic punk thrash of ‘Obligatory Castration’. ‘Disinfect Us’ is another example of the band taking a slower approach, and the song features a cool Link Wray style guitar line and echoing drums that wouldn’t sound out of place backing a spaghetti western shootout.

The album then takes another unexpected venture with the industrial doom of ‘Reptiles State Funeral’, Cabbage’s heaviest song to date. Beginning with the foreboding sound of some nasty, distorted drums, the song descends into a hellish death march of screeching guitars, demonic whispers and buzzing keyboards.

The final track ‘Subhuman 2.0’ is the longest on the album, at nearly seven minutes it is a suitably epic and gloomy closer. An acoustic opening featuring the morose refrains “You focus on the weakness, you focus on the weak” and “Please be awake, in the morning’ is set alight a few minutes in by mournful and distorted guitar that then charges the song to its cinematic finale, the bands energy exploding through various weeping keys and whirling synths.

‘Nihilistic Glamour Shots’ has been a long time coming, and it could have been easier for the band to rush out an album and fill it with previously released, already well-received material, and it shows confidence in their development and progression that only two previously available tracks (‘Celebration of Disease’ and ‘Gibraltar Ape’) have made the album. Whilst ‘Gibraltar Ape’ is a solid tune, with its catchy bass-line and sweetly strummed guitars, it is a testament to the quality of the new material that it does not stand out too highly among songs such as ‘Arms of Pleonexia’ or ‘Exhibit A’.

I find the album to be a triumph, Cabbage have successfully managed the difficult task of keeping their wit, bite and raw energy, maintaining what made them one of the most exciting groups in the first place, whilst expanding their sound and then moving into new territory, making ‘Nihilistic Glamour Shots’ a thrilling and satisfying listen.