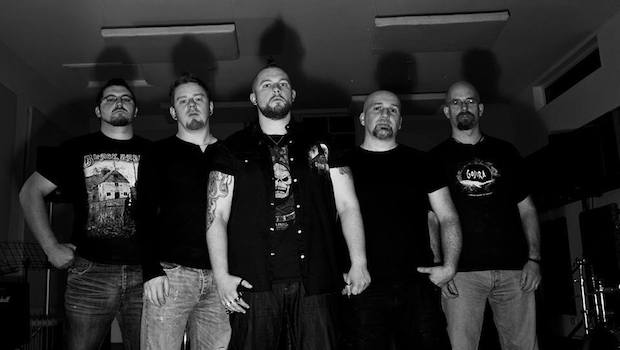 Welcome to the re-birth of Irish heavy metal.

Black Svan have seen moderate success since their formation in 2009, having toured with bands including Stuck Mojo and Fozzy across the United Kingdom and Europe. They’ve even played alongside one of the leading members of the New Wave of British Heavy Metal, Diamond Head. Sharing a stage with these names, plus others, has gained the band a following which spans not just Ireland, but the UK and Europe as well. After gaining invaluable experience on stage, Black Svan opted to enter the studio and record their first full-length album, ’16 Minutes’.

You could say that, bar a handful of exceptions, the Irish heavy metal scene has been fairly quiet over the last few years. Though there are hundreds of Irish bands performing night after night for their local venues, the nation’s metal fans have been lulled into a deep sleep as they await the next breakout band to take charge. Black Svan’s frontman Keith Caffrey urges you to “wake up” as the band open their album with ‘Retribution’. An excellent choice for the opening track, the band effortlessly launch into a song that shows us their ability to be aggressive and loud yet melodic at the same time. This is something of a contrast of the track that follows.

‘Bleed Me Dry’ has a much grittier tone to it than its predecessor. Kenneth Bell opens this one with a slick bass riff and is quickly joined by the guitar-wielding duo Jagger Murray and Mo Clifford. This blistering riff is complimented by an insanely quick, machine gun-like double bass drum beat played by drummer Joey Afonso. The song’s climax comes courtesy of Jack Nicholson’s character from The Shining. We hear a sound-byte of the famous quote from the film, “I’m not gonna hurt you…”, before Murray jumps into a guitar solo that would fit perfectly into the work of Slipknot’s Jim Root.

Following this is a song that stands high above the majority of the others in this reviewer’s opinion. ‘Dream Forever’  begins with a haunting introduction led by Caffrey showcasing his skillful vocal range. When needs be, he is more than capable to recite a sweet, melodic verse. The band waste no time in getting back to their main style, though. An immaculate drum beat opens the door for the full band to come in with yet another dark, fast-paced effort that shows off all the members’ abilities. The real star of the show here though is Caffrey. From his sweet opening to the aggressive, powerful growls in the main section of the track, he has proven to be a worthy frontman of a band holding this much talent.

The album’s title track is an open invitation to the mosh-pit for concert goers. This song’s intro just makes you want to jump right into the center of a crowd and go absolutely mental. ’16 Minutes’  is a single just waiting to happen, any metal fan will adore the tune’s dynamic changes and the short, yet sweet, guitar solo that leads into the final chorus.

The old saying stays true on the ’16 Minutes’ album, “Save the best ’til last.” ‘Rule The World’ takes obvious influence from the likes of Pantera and we couldn’t be happier with the result. ‘STD’ has an incredibly bouncy riff that leads in to a throaty, gruffy verse sung by Caffrey. This soon transitions into a chorus where he once again shows his flexibility as a vocalist, emulating the likes of Eddie Vedder with extremely catchy melodies. ‘Steal Your Crown’ opens with a stellar, yet now unfamiliar, acoustic performance from Murray and Clifford. This leads into what seems like a fairly generic metal tune for the first 3 minutes but don’t worry, the song is saved with an aggressive, punchy finale that contains the album’s greatest guitar solo and some absolutely incredible drum fills.

The true standout from the album lies in the final track. ‘Sickness’ could be considered a completely different genre of music when compared to the rest of the CD, in the best way. The song’s verses are reminiscent of something found on an Alice in Chains album, while the chorus holds a grungey, infectious melody that you’ll have stuck in your head for the rest of the week upon hearing it even once. The song runs at over 5 minutes long, but you’ll be itching to hear it again instantly.

Black Svan have truly impressed us with their first studio album. The talent in this band is simply undeniable – from Keith Caffrey’s brilliant vocal range to Jagger Murray’s fantastic guitar solos to Joey Afonso’s mesmerizing accuracy and speed behind the kit. Unfortunately, there isn’t an awful lot of variety to be found. Each song has the same underlying vibe to them, though hopefully this is something the group will mend in future releases. The accessible album length of just 10 tracks gives us a great insight to what the band can offer though – and we can’t wait to hear what else they have up their sleeves.

Check out Black Svan’s music video for ‘Sickness’ below and catch them in Dublin’s Academy venue on November 14th as they support Kerbdog.